You can stay indoors Saturday or Sunday and have a Carey Mulligan double feature weekend. On Sunday, April 25th on ABC, she will hear her name read once again as as Best Actress Oscar nominee. This time, for her riveting performance as the smart, assertive coffee shop clerk in Southern California out to avenge the sexual assault of a dear friend. She dons different looks in her mission as an avenging angel. The movie is PROMISING YOUNG WOMAN. Last Saturday, Carey Mulligan was the guest host on SATURDAY NIGHT LIVE. She was so good that I felt it's time for her to be offered some good comedy scripts. She's a fascinating actress.

ABC appears to now have a lock on, not only the Oscars telecast, but also on the announcement of the Oscar nominations as their revealed live out of Los Angeles. The latter happens during GOOD MORNING AMERICA. I watched GMA co-anchor Michael Strahan recently interview Mulligan about her nomination. Bless his sweet heart. They way he structured his question led me to believe he thought this Sunday will be her first time as a special guest invited to Hollywood Prom Night. PROMISING YOUNG WOMAN earned Carey Mulligan her second Best Actress Oscar nomination. 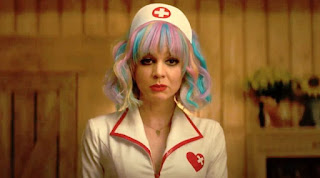 Back in 2009, I got a critics' preview afternoon screening invite to a new movie called, AN EDUCATION. The screening was held in a posh screening room in midtown Manhattan. I sat next to a fabulous friend, film critic and novelist, Thelma Adams. Including Thelma, most of the other critics were the ones quoted in quality newspapers and magazines and occasionally seen on TV. I, as usual, looked around to see if I had, yet again, integrated a critics' screening. I had. It was a predominantly White group -- not that race had anything to do with the movie. I always look for fellow Black reviewers. 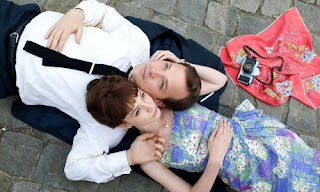 AN EDUCATION started. It won us over in the first five minutes. I looked around and was thrilled to see that several of those high-tone critics were leaning forward in their seats with that "Who's the girl?" expression on their faces. I heard someone near me whisper "...an Audrey Hepburn quality." At the end of it, I heard buzz that she should get an Oscar nomination. I agreed. She sparkled onscreen. The girl was Carey Mulligan as the lovable, whip-smart, disciplined student from a working class family in London. Mulligan is from London. The student is focused on fulfilling her dad's dream of her being accepted into Oxford. Someone who should've been an Oscar nominee in the Best Supporting Actor category was Alfred Molina as the loving dad. Molina and Mulligan are reteamed in PROMISING YOUNG WOMAN. The promising young student in 1960s suburban London feels a change in her life when she notices a playboy older than she. Here's a clip. Peter Sarsgaard stars as the playboy.

Carey Mulligan's movie career is an example of the kind of diversity and inclusion needs to embrace more. AN EDUCATION, which was also a Best Picture Oscar nominee, was directed by Lone Sherfig and based on a memoir by Lynn Barber. PROMISING YOUNG WOMAN, a current Best Picture Oscar nominee, was directed by Emerald Fennell. She shot the film in 23 days. Carey Mulligan has received both of her Best Actress Oscar nominations for performances in films directed by women. She's joined that exclusive club of females that began with a 1930 dramatic performance. Ruth Chatterton scored a Best Actress Oscar nomination for her work in SARAH AND SON directed by Dorothy Arzner. The group of females who got Oscar nominations for work in films directed by women includes Amy Irving (YENTL), Kate Nelligan (THE PRINCE OF TIDES), Lauren Bacall (THE MIRROR HAS TWO FACES), Charlize Theron (MONSTER), Marlee Matlin (CHILDREN OF A LESSER GOD), Annette Bening (THE KIDS ARE ALL RIGHT), Jessica Chastain (ZERO DARK THIRTY) and Meryl Streep (JULIE & JULIA and THE IRON LADY).

Carey Mulligan has also done exceptional work in movies from Black filmmakers. Director Dee Rees (PARIAH) got an excellent performance from Carey in the 2017 drama, MUDBOUND, available on Netflix. Carey played a poor Mississippi farm wife during the Depression. (Why do Brits seem born to play Americans from the Deep South?) MUDBOUND, which I've watched more than once, is the production with the stunning film debut from singer Mary J. Blige. She's remarkable as another Depression era Mississippi farm wife who watches her son go off to fight for America in World War 2 while his family back home continues to endure racism. Mary J. Blige got a well-deserved Best Supporting Actress Oscar nomination for that memorable performance. Why isn't she getting other good film offers like Carey Mulligan has gotten? I highly recommend seeing Carey and Mary in MUDBOUND. 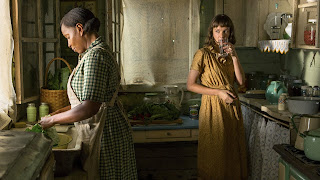 Mulligan is also a stand-out in 2011's SHAME from Black British filmmaker, Steve McQueen (12 YEARS A SLAVE). In SHAME, she's a New York City lounge singer who visits her sex addict brother in Manhattan for an unexpectedly long stay. They have a fractured relationship. Michael Fassbender stars as the brother. Mulligan made me gasp with her brilliant singing rendition of "New York, New York" -- quite different from the Liza Minnelli introduction of it in Martin Scorsese's NEW YORK, NEW YORK (1977) and the Frank Sinatra cover that's popular on jukeboxes.

Here's a trailer for PROMISING YOUNG WOMAN. You can now stream the movie on Amazon.

Have a safe and relaxing weekend.

On THE MITCHELLS vs THE MACHINES

I've got a recommendation for you. Do you need some good-natured laughs? Do you like animation? Do you have a knowledge of films made b... 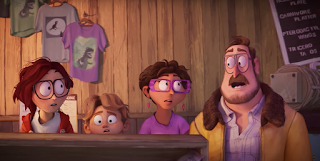