Two of the most compelling, most memorable features that I have seen this year are short films -- A LOVE SONG FOR LATASHA and A CONCERTO IS A CONVERSATION. They told their stories in 30 minutes. TWO DISTANT STRANGERS, now showing on Netflix, joins those other two features. I heard about this short drama last weekend when a piece about it was done on the CBS THIS MORNING news show. TWO DISTANT STRANGERS, from filmmakers Travon Free and Martin Desmond Roe, is a current Oscar nominee in the live action short film category. What a strong piece of work it is.

As was mentioned in the CBS THIS MORNING profile, there's an element of the Bill Murray comedy, GROUNDHOG DAY, in it. A young Black man has the same deadly experience with the same White cop day after day. TWO DISTANT STRANGERS is strong and timely in light of the George Floyd murder and other police killings of unarmed Black citizens. 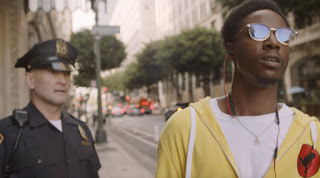 The story takes place in New York (but a couple of scenes  look like they were shot in the downtown Los Angeles Civic Center area.) It opens with a look at a dog alone in nice apartment. The pooch wants breakfast. His owner is in bed with a girlfriend at her apartment. He's sweet on her and they engage in some cute banter. He's a graphic artist and has a wad of cash on his person. He leaves her apartment building and, before he walks to the next block, he's confronted by a cop who accuses him of smoking weed, knocks him to the ground and handcuffs him. The young man calls out "I can't breathe!" A street vendor, shouting that the young man is innocent, pulls out her cellphone and video records the entire violent incident.

Like Bill Murray in GROUNDHOG DAY, the graphic artist wakes up to start a new day and has the same experience with the same characters and new action is added. The young Black man just wants to get home to feed his dog. However, he's living a recurring nightmare of being Black in America and being an innocent victim of police. Can the Black American and the cop get to know each other and stop the recurring nightmare?

There is excellent acting from Joey Bada$$ as the young victim, and Andrew Howard as the cop. You'd think Howard was a hardcore New York native. He's from Wales overseas in the United Kingdom. The actor has some impressive TV and film credits.

In the closing credits, we see a list of names. The names belong to innocent people of color who were killed by police. I've been living with my sister in the Minneapolis area for a couple of years. I was here when the verdict was read in the case of the cop who shot Philando Castile multiple times at close range as Castile sat on the passenger's side of a car's front seat. His girlfriend was driving. His 4-yeaar old child was in the back seat. The pair had been unjustly pulled over by the cop. Castile, as one can hear in the recorded video, was compliant and polite as he identified himself. He spoke as if he was in church. The cop, armed and wearing a body shield, is yelling at Castile as he points his gun and shoots at the orderly, unarmed man.  The cop claimed that he feared for his life. Local stations cut from regularly scheduled programming to present the verdict. I watched. When the verdict was read -- justice for Philando Castile had not been served -- the camera on the local ABC affiliate cut back to the Caucasian news anchor duo. What caught me was that the two anchors looked shell shocked. I had a hunch there was some element that had not been mentioned in the network news coverage.

In that days to come, when the network news camera had left town, my hunch was confirmed. Did you ever see Frank Capra's IT'S A WONDERFUL LIFE? Well, apparently, Twin Cities residents and local news reporters were familiar with Philando Castile -- because he was like the George Bailey character in that classic film. He was constantly going out of his way to do good deeds and help less fortunate people in his community and workplace. He helped children. There were multi-cultural memorial local tributes to Castile that were covered on the local news. Philando Castile should be alive today.

Botham Jean is also on the list. He was the accountant in Dallas, alone in his apartment, when an off-duty cop entered and shot him to death. She claimed that she thought it was her apartment and he was a burglar. Her apartment reportedly had a red doormat at the front door. His did not.

The Oscars are this coming Sunday on ABC. The half-hour TWO DISTANT STRANGERS is on Netflix. Best of luck on Sunday to the directors and the cast. 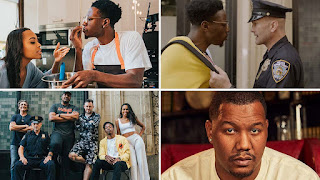