I adore Rita Moreno. I have since I was an adolescent growing up in Los Angeles. On TV, I watched her  film work in SINGIN' IN THE RAIN, THE KING AND I and WEST SIDE STORY. I loved her TV work in THE ELECTRIC COMPANY and as a special guest star in terrific episodes of THE ROCKFORD FILES with James Garner. She is simply marvelous. 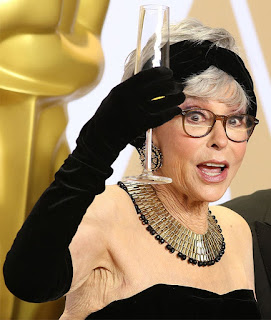 Decades later. when I was grown up and living in New York, not only was I in awe of her performance as Sister Peter Marie, the prison psychiatrist nun on HBO's OZ television series, I was stunned that she never got an Emmy nomination for her memorable work as that original, earthy, no-nonsense yet compassionate TV character. How clueless was the TV academy? Just as clueless as Hollywood when you consider that, as Moreno revealed in an interview on TCM, she had no good Hollywood script offers for 7 years after she won the Best Supporting Actress Oscar for WEST SIDE STORY. That's why she went to TV. 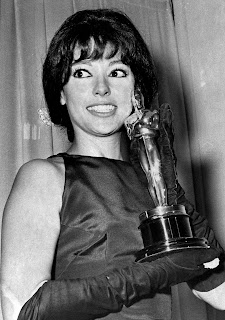 By the way, I would have given her a second Oscar nomination for her hysterically funny performance as the totally talent-free gay bathhouse lounge act singer in 1976's THE RITZ. She won a Tony for the role when THE RITZ was on Broadway. The film version was directed by Richard Lester, the man who directed The Beatles in A HARD DAY'S NIGHT and HELP! As for comedy, did I mention that she absolutely rocked her role as the colorful grandmother on Norman Lear's imaginative 2017 to 2020 reboot of his classic ONE DAY AT A TIME sitcom?

Seeing Rita Moreno look sensational as the presenter for the Best Picture Oscar on the recent Academy Awards was, for me, one of the highlights of the show. I've blogged before that meeting her in 2000 and getting an 8x10 autographed photo from her during our brief meeting was an extreme thrill. A memorable and inspirational experience with someone who'd been an inspiration to me for years.

A documentary about this remarkable talent and social activist has been made. I have to share the trailer with you. Here it is. I cannot wait to see RITA MORENO: JUST A GIRL WHO DECIDED TO GO FOR IT.

While I'm at it, the trailer for the upcoming Steven Spielberg remake of WEST SIDE STORY premiered during the Oscars telecast. The film was slated to open in 2020 but was pushed to December of this year. Rita Moreno has a supporting role in the remake and she's one of the film's producers. Viva, Rita! Here's the trailer for Spielberg's WEST SIDE STORY.

One more thing. During my college years in Milwaukee at Marquette University, I auditioned for plays being put on by the Theater Arts department. Every time I auditioned for a role that had always been played by white actor and was told it was usually played by a white actor, I would say "Rita Moreno played Annie Sullivan in a New York production of THE MIRACLE WORKER." She did. In the late 60s. I told her that when I met her -- and her smile was quite broad as she took my hands in hers.