He has made me laugh so hard at the movies that my sides ached. This blogpost was inspired by my previous one about the new Jamie Foxx sitcom on Netflix. Foxx plays a single dad whose sweet daughter comes to live with him after her mother's death. In the first episode, we see dad and daughter in therapy to smooth over some bumps in their wacky sitcom relationship. The show is called DAD STOP EMBARRASSING ME! The therapy scenes are played for laughs and the title of the episode is "Black People Don't Go To Therapy." In an ABC dramatic series, Romany Malco has flipped the script on that. Yes, the same actor who made me howl with laughter in 2005's THE 40-YEAR-OLD VIRGIN with Steve Carrell, 2007's BLADES OF GLORY with Will Ferrell and 2008's BABY MAMA with Tina Fey and Amy Poehler. 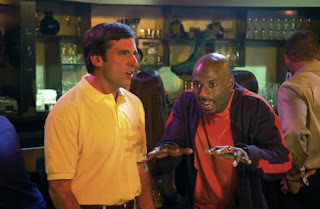 Romany Malco is a regular on the ABC series, A MILLION LITTLE THINGS. He knocks his dramatic role out of the park. The basis of the show is our look at a group of friends who try to live more authentic, more open lives after one beloved friend -- seemingly having a fine life -- commits suicide. Romany plays Rome Howard, a loyal friend and married man. He was a sponsor to one friend who needed to attend Alcoholics Anonymous meetings. Rome has had his own emotional problems and sees a therapist about them and the complicated relationship with his parents. I don't know if the show's many viewers realize how groundbreaking the Romany Malco character is on network TV. I certainly never saw a Black character seriously seeking mental health help from a professional when I was growing up and watching TV. I can't remember a regular Black character doing such on a TV show in my adult years. Romany Malco, dramatically and effectively flipped the script on the "Black People Don't Go To Therapy" attitude, an attitude which really does exist in our Black community. I heard it in South Central L.A. when I was a kid, I heard it in our home. Therapy was for White People. Black folks with emotional problems just needed to go to church and talk to Jesus, go to the beauty parlor or go to the barber shop. But sometimes those problems can be overwhelming and you need to talk them with out with a professional more than you need to feel ashamed for seeking help. Malco's is an Emmy nomination-worthy performance and an important one. Here's a clip.

This is a TV image that's real and one that's been sorely needed for a long, long time. It's a respectable reflection of our Black lives. I deeply appreciate the trailblazing Romany Malco work on ABC's A MILLION LITTLE THINGS and I wish TV press members who write about the show would too.