They're black, they're gay, they're Muslim.  This is why I love independent movies.  In 1 hour and 20 minutes, NAZ & MAALIK took me to Brooklyn and introduced me to characters that no mainstream Hollywood film I've seen had ever done.  I felt like I knew these two 18 year olds.  Mike Sargent, my buddy who is a film critic and also an African-American indie filmmaker himself,  introduced me to this movie.  A couple of weeks ago, I heard David Edelstein review it on NPR.  He's also the film critic for the network TV weekend news magazine program, CBS Sunday Morning.

Naz, with his sadsack eyes, is the naive one who can work Maalik's last good nerve if he gets himself in a bit of a mess.  Instead of admitting that he caused his own mess, he's the kind who'd say "If you don't help me then you don't love me!"  One of my parents used to be like that.  Naz has a more chill attitude.  They're both good kids and good students.  You care about them and you like them.  They sell lotto tickets and holy cards on Brooklyn streets to raise money for their college tuition. 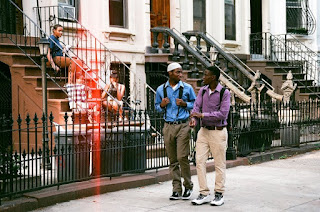 They pray at their mosque, they have philosophical talks about how their religion applies to their modern lives, one brings up the controversial Kitty Genovese case from the 1960s and they also discuss the post-9/11 world they live in with wiretaps, profiling and airport security body scans.  One is the optimist and the other is the skeptic.  While Naz can be the excitable and occasionally clueless one who doesn't always think before acts or speaks, Maalik is cordial, charming and street smart.  They argue but these two young dudes balance each other out.  Without Maalik's savvy to help him out, Naz's mouth can cause him a little drama. 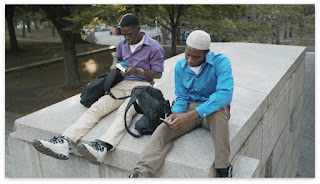 They've spent a night together but they're not out to their families about being boyfriends.  They're still on the down-low for family and religious reasons. 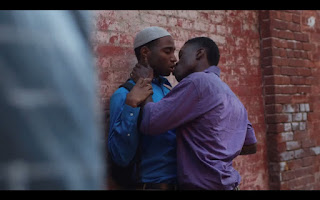 Naz and Maalik are profiled because of Naz's kofi -- the Muslim cap he wears.  An undercover agent posing as a street hood approaches them and asks them if they'd like to buy a gun.  He shows the gun he's got hidden on his short.  Maalik acts like a teen would.  They laugh and continue down the street.  By the way, seconds before they were approached to buy a gun, Naz and Maalik mentioned Jane Austen's Pride and Prejudice in their conversation.

The fact that they stopped and talked to the man was watched by his F.B.I. partner in a parked car.  She know has them under her surveillance to see if they have terrorist leanings.  They're just a couple of teen dudes in Brooklyn trying to keep their families from finding out that they're gay.  But that F.B.I. causes drama when she talks to the nervous and non-street smart Naz.  Basically, the two teens are guilty of having committed only one non-crime crime -- WWB.  Walking While Black.  It seems like these two young black males are constantly being watched. There are moments that make you angry.  There are moments that make you laugh.

I arrived in New York in 1985 and I lived in Brooklyn for years.  I loved it.  I spent a lot of time in Brooklyn over the summer doing some part-time work in my old neighborhood.  I knew streets that I saw in Naz & Maalik.  I knew the subway stations and the subway train lines.  I'd ridden them.  I saw my old neighborhood in Brooklyn and I saw areas I'd visited.  The movie felt familiar to me.  It reflected life I knew and ordinary working class black folks I'd seen just about everyday in my community.  The two main characters even refer to something that struck me over the summer about the Brooklyn of today -- more condos are going up to make it look like Manhattan.  Those elements were nice touches of authenticity from writer/director Jay Dockendorf.  He's not gay, not black and not Muslim. But he did live in the community where the two leads characters live.  His two best friends were gay.  Dockendorf writes about worlds he grew to know.  By the way, the subway restroom argument scene? Totally improvised.  Those two young lead actors are good.

When Naz & Maalik duck out of view on the street so they can grab a quick kiss, I thought "Been there, done that."  David Edelstein referred to that scene as the two guys "engaging in horseplay."  That sounded so 1950s.  He'd have been better off saying "They tried to get a little sweet groove on for a quick minute."  They're black, they're gay, they're Muslim -- and someone gets seriously wounded because of a live chicken.  You have to see for yourself.

The performances by newcomer actors Curtiss Cook, Jr as Maalik and Kerwin Johnson, Jr as Naz are warm, natural and charismatic.  They hold your interest and the actors work well together.  There's an actor named James Roach who hits comedy home run in a bit part as a subway station bag man who rants about how much he hates the G train. 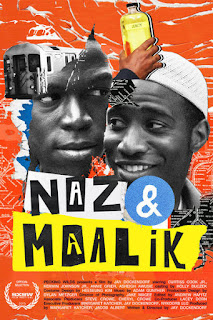 Naz & Maalik is available on Amazon Video.  To read more about this fresh indie film, check out its website:  NazAndMaalik.com.