A Bear with Astaire Flair in TED 2

Fred Astaire would so dig Ted's number.  There's one thing we can say about actor, singer, writer and producer Seth MacFarlane:  He loves Broadway showtunes and classic  MGM musicals.  You can tell that when you watch his animated TV series, The Family Guy.  There's a visual nod to the Broadway classic, A Chorus Line, in the credits.  In one episode, Baby Stewie recreates the Jerry the Mouse and Gene Kelly song and dance from MGM's 1945 musical, Anchors Aweigh.

2015 saw the release of TED 2, MacFarlane's sequel to his fantasy comedy movie, TED, in which we follows the misadventures of a potty-mouthed by adorable talking teddy bear. 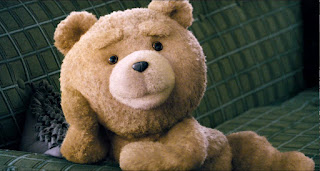 Mark Wahlberg plays Ted's owner and best friend.  In Ted 2, the bear settles down and marries his hot blonde girlfriend (a human).  But Ted's best buddy is blue because he's been lonely for the six months following his divorce.  Then Ted has a civil rights issue regarding his marriage in Boston.  OK, that's enough of the plot.  But, if you've seen the totally inappropriate but often hysterically funny animated stuff on The Family Guy and American Dad!, you know not to be shocked by the bear and his buddy accidentally wrecking a sperm bank storage room.  Ted and John stick, not just to the floor, but through thick and thin. 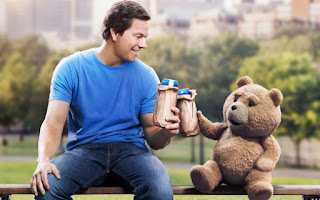 A friend rented the DVD this week and urged me to watch with him because he felt I needed the laughs.  I was not prepared for the absolutely fabulous musical number for the opening credits that comes about five minutes into the movie during the wedding reception. 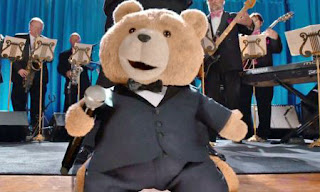 I took the DVD the next day and watched that number about a half dozen times and, man! It slayed me!  The whole deluxe production number with showgirls and men in Fred Astaire-like tuxedos with top hats is like something out of a Freed Unit A-list MGM musical of the 1940s.  If you loved those musicals as much as I do, you will gasp at the class, wit, choreography and execution.  Rob Ashford choreographed it and a magnificent job he did.  Ted is in the number.  A dancing bear with all those terrific couples.  If the music sounds familiar that's because it's from a Freed Unit A-list MGM musical of the 1940s.  It's the "Steppin' Out With My Baby" number from Irving Berlin's Easter Parade starring Fred Astaire and Judy Garland.  If you have the CD soundtrack, you've heard that complete orchestra instrumental arrangement for the jazz dance performed by Fred Astaire.  The arrangement onscreen in Easter Parade is a bit shorter for Astaire's number.  Ted dances to the complete version heard on the CD soundtrack.  And the number is shot the way Fred Astaire and Gene Kelly numbers were shot in MGM musicals directed by Vincente Minnelli and Charles Walters.  We see the dancers full frame and the camera stays on them.  There's no manic cutting every three seconds, a style that goes back to MTV music videos.

For as lewd, crude and juvenile as the Seth MacFarlane comedy can get, he can give us something as swingin' and sophisticated as that opening number to an Irving Berlin tune.  MacFarlane directed Ted 2.

MacFarlane, by the way, has a rich singing voice and he cut a CD of vocals.  On Music Is Better Than Words, it is no surprise that he sings a couple of tunes from MGM musicals.
at February 18, 2016