Check Out HAP AND LEONARD

This is a new original series, based on popular books, that premieres Wednesday night, March 2nd, on SundanceTV.  The story takes places in 1980s Texas.  The idealism of the 1960s is being mowed by the growing corporate mentality of the 1980s.  Press materials describe HAP AND LEONARD as being "swamp noir" and that's accurate.  There's an innocent guy who's described as "always the noble one, ready to make a stand."  There's a femme fatale working as a waitress in a diner.  There's a case with a whole lot of cash money in a swamp.  It's been there for years and some folks are hungry to get their hands on it. By the way, Christina Hendricks, the actress who played Joan on Mad Men, stars as Trudy, the femme fatale waitress. 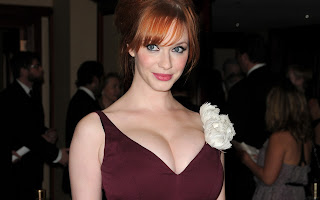 Not only is Ms. Hendricks the Big Ben of the hourglass figures (as someone once wrote a long time ago about curvaceous Hollywood sex symbol/writer Mae West), she is one mighty fine actress.

I saw the first three episodes and here's one thing I really dig about it.  We focus on the two best friends, Hap and Leonard.  Hap, the idealist, was against the war in Vietnam when he got drafted.  He didn't serve.  Leonard is a Vietnam veteran.  Hap is white.  Leonard is black.  Hap is straight.  Leonard is gay. 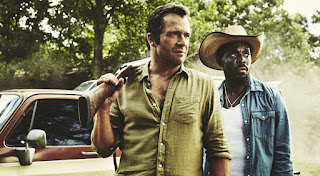 Leonard is not closeted.  And he's not a victim.  Mess with him or someone close to him and he can open up a whup-ass on you in a heartbeat.  He's got more a temper than Hap.  Hap and Leonard -- and Trudy -- have known each other for a long time. 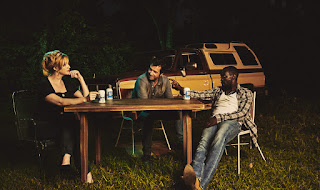 In fact, Trudy and Hap were a romantic item way back when he got drafted.  Yep, they've known each other a long time.  And, even though she went on to other men, she still knows how to get to Hap. 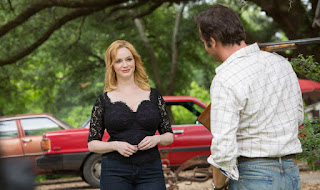 The main thing that hooked me into the episodes right away as the central friendship.  TV rarely gives us a show with a look at a straight/gay male friendship.  We've seen it in sitcoms like Happy Endings, the sitcom on ABC that was pretty bright and fresh but, unfortunately, yanked by the network.  I loved the Chicago friendship between gay Max, the bear who was no slave to fashion, and straight Dave, his best buddy.  Happy Endings had a cast of characters.  As said in its promos, it was "Like Friends -- only with black people."  I liked that sitcom.  I can think of other TV shows that had gay characters -- a barrel full nowadays -- but I cannot think of one that focused on a straight/gay male friendship.  Especially one that showed that the two characters really need this friendship and take care of each other.  They accept each other as they are.  I'm personally interested in this because I had a couple of straight roommates back in the 80s who continue to be two of the most special people in my life. 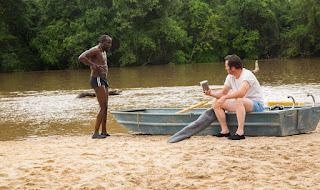 I like it when I watch a show that gives me that zing of recognition and realness.  There are quirky characters and a couple of straight-up psycho killers on the loose while the two best friends and Trudy try to get their hands on the loot.  This series is based on books by Joe. R. Lansdale. 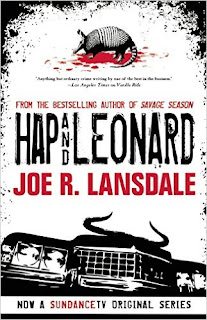 Leonard, the gay Vietnam vet, is played by Michael Kenneth Williams.  Cable TV viewers will recognize him as the actor who played Omar on HBO's The Wire.  He was later in the cast of HBO's Boardwalk Empire.  Hap is played by James Purefoy.  Once again, TV gives us a British actor who absolutely nails an American accent.  As for Hendricks, she's doing sort of a Barbara Stanwyck turn here.  In her classic films, Stanwyck was the ambitious woman who knew herself and could be a player in the boys' game.  Stanwyck could play that kind of woman for laughs in The Lady Eve and Ball of Fire, she could play her with a sense of righteousness as in Meet John Doe and she could play the dark side of the ambitious woman as she did brilliantly in Double Indemnity.  Christina Hendricks is again playing a woman who's ambitious, who knows herself and who's in a game with the boys.  But she's in the backwoods of Texas in the 1980s this time.  Not in the concrete jungle of 1950s/60s New York City.  Here's a trailer for SundanceTV's Hap And Leonard.
I hope it's a hit.