Cate the Great in CAROL

To me, Cate Blanchett is a goddess of all that is good about the craft of screen acting.  I was in the mood to see something rich and romantic, something that had a deluxe touch of Old Hollywood production values about it.  CAROL, directed by Todd Haynes, delivered all that.  It's gorgeously photographed, designed and costumed.  Cate Blanchett as Carol has "the Joan Crawford mouth," as we heard during Hollywood makeover moments in the first two versions of A Star Is Born, and Rooney Mara as the object of Carol's affection eventually winds up with the early Audrey Hepburn eyebrows.  Blanchett is such an elegant knock-out in this movie, so magnetic, that she'd made me wish I was a lesbian. 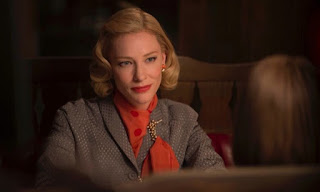 Cate the Great has two Oscars.  She won the Best Supporting Actress prize for playing actress Katharine Hepburn in The Aviator.  That starred Leonardo DiCaprio as the mysterious millionaire and hot Hollywood bachelor Howard Hughes.  She won Best Actress for Woody Allen's Blue Jasmine.  She's up for the Best Actress gold again thanks to this performance.  Rooney Mara is a Best Supporting Actress Oscar nominee for her smart, inspired work.  The film didn't make the cut for the Best Picture Oscar race but it sure should have.  The screenplay is by Phyllis Nagy and it's based on The Price of Salt by Patricia Highsmith. 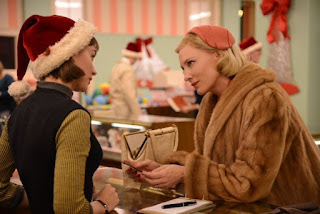 Carol has a rich life, financially speaking.  It shows in her outfits.  Carol could also be called That Touch of Mink.  But that huge house this wife and mother live in could also feel like a jail to her at times.  Yes, Carol has a husband and a child.  And she having a romance with Therese, the clerk she meets at an upscale Manhattan department store while Christmas shopping.  A young man is interested in Therese.  Carol's getting a divorce from her handsome, privileged husband and it's complicated.  He's ignored the truth of her.  Director Todd Haynes calls this film "a one-of-a-kind lesbian love story."  Here's a trailer for Carol.
My fabulous friend Beege and I sent messages to each other about Carol.  We both love the film. Beege wrote "It's about women.  NOT lesbians."  Have you seen Carol?  Beege has a point.  In the screenplay, the husband and his folks pretty much expect Carol to act as if she's on display like one of the decorated dolls we see on sale in the department store where Therese works.  She has to conform to their upper class expectations and fall in line.  There is a lesbian romance in the film but the film is not about lesbians in the same way director John Sayle's Lianna (1983) or director Donna Deitch's Desert Hearts (1985) were.  If Carol became romantically infatuated with a man, her husband and his folks would still expect her to live and conduct herself within their social margins.  The fact that it's a same-sex romance in the movie, to me, raises the stakes on the drama for a story set in that period.  Will Carol speak out, liberate herself and not become a 1950s doll of a woman -- a toy, a decorative object?  Carol can be a lesbian and also be a good mother.  The husband knows the truth of her.  He's known for some time.  He wants to get legally ugly with her sexuality in the divorce proceedings.

This can be seen as a film about women venturing out to claim their own lives.  If you saw it, leave me some comments.  What did you think of Carol? 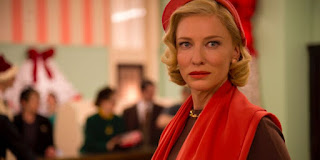