The CEO of Apple, hailed as the pioneer of the personal computer revolution, died in 2011 at age 56 of cancer.  After that, he died twice at the box office.  The first time was when his 2013 biopic, JOBS starring Ashton Kutcher, flatlined at the box office.  The same thing happened with the 2015 biopic, STEVE JOBS, a film that some top critics loved.  Two performances in the flop biopic took it to this year's Oscars face. Michael Fassbender is a Best Actor nominee for his portrayal the late billionaire and Kate Winslet is in the Best Supporting Actress Oscar category for her work as Apple marketing executive Joanna Hoffman.  Fassbender is seen here in the white shirt standing next to Winslet in a shot from the film. 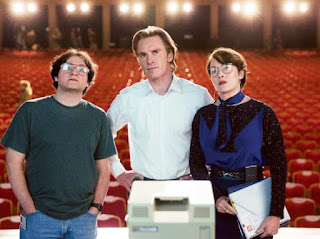 Fassbender and Winslet are extremely talented, versatile, strong actors.  Do they give Oscar nomination worthy performances in this film?  Yes.  Especially considering there vocal work.  Fassbender is a German-Irish guy who was raised in Ireland.  He does sound like a Northern Californian in this Bay Area-based drama.  Winslet is a Brit doing a Polish-American accent.  However, you must admit he's an odd choice for Jobs.  He doesn't resemble Jobs. 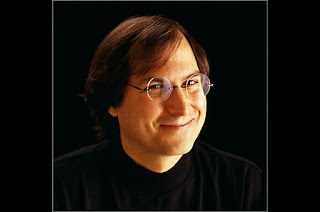 The biopic flashes back to computer giant's days as a young man working in a garage and takes us to the height of his fame before illness struck. 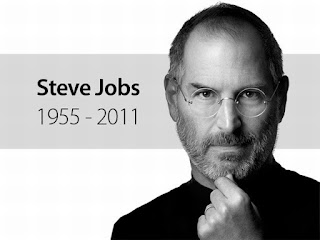 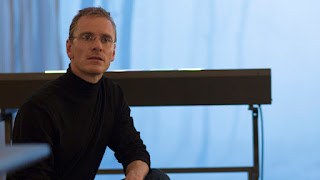 They get the wardrobe right but not the physical characteristics.  The film opens with an actor who does not look like Steve Jobs playing Steve Jobs as he prepares for one of his major 1980s presentations.  Within the first five minutes, Jobs strikes you as being brilliant but a prick.  Twenty minutes later, you just want to slap him for his rudeness, selfish, arrogance, his lack of gratitude and his cheapness.  He's upset that he's not on the cover of TIME magazine.  He's in a legal dispute with his ex-girlfriend who is also the mother of his little girl.  Mother and child are on welfare.  The mother is begging him for money.  He's made $441 million.  The first 20 minutes needed a strong "Rosebud" moment...like in Citizen Kane.

I have the DVD of this film and took three attempts at watching it straight through to the end.  The third time worked.  I dozed off in the middle the first two times.  It's not bad movie.  It's just that this talky screenplay full of arguments didn't really make me care about Jobs.  What was the Aaron Sorkin screenplay trying to say?  What did he want to tell us?  Was this supposed to be a cautionary tale of how not to behave?  This glossy, quick-paced production reminded me of a line from 1939's The Wizard of Oz that's said by Tin Man:  "The tinsmith forgot to give me a heart." Steve Jobs, the movie, doesn't have a heart. Fassbender is in fine form.  Winslet, as the voice of reason who sees the mess he's made of friendships and family relations ultimately orders him to "Fix it!,"  We like her.  Winslet bites into this role like it's a thick, juicy T-bone steak.  My favorite parts of the film are their scenes together.  It's like watching two tennis greats in a championship match. 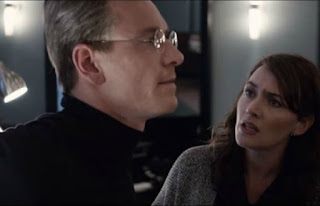 There's a very impressive dramatic performance from Seth Rogen as the mistreated Apple co-founder Steve Wozniak.  We usually see Seth in broad comedies but, wow, he's quite strong here in a serious role.  You care about him because -- like millions of us -- all he's asking for is acknowledgement of his hard work.  A thank you.  And Jobs refuses to give it.  You wait for Wozniak to call Jobs on his crappy behavior. 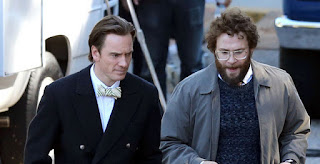 Because the screenplay portrait made Jobs such a wealthy and driven jerk, I loved the scene near the end where the now college-aged daughter tells him off backstage in front of people moments before he's scheduled to go onstage to a theater packed with cheering fans and devoted followers.  Jobs philosophy is "...as long as you have control."  He can control his brand and his image.  He needs to learn self-control when it comes to the cold way his treats the people closest to him.  The daughter's verbal roasting makes him realize he needs to, as Joanna ordered, "fix it."

I like Fassbender.  I thought of other 2015 performances by men in films with more satisfying screenplays that I would've put in the Best Actor Oscar race.  Men like Benecio Del Toro as the Mexican drug war federal agent in Sicario, Ian McKellan as the older and infirm Sherlock Holmes solving one last mystery in Mr. Holmes and the late Robin Williams as the closeted married man whose infatuation with a young street hustler shakes up his life in Boulevard.  Tom Hanks was in peak form for Bridge of Spies.  He's excellent in it.

Remember the over-caffeinated way the characters delivered dialogue on Sorkin's NBC series, The West Wing, coupled with those "walk and talk" scenes?  There's a lot of that in Steve Jobs.  But there's not much heart.  I felt it's a somewhat hollow movie.  Did you see it?  If so, what's your opinion? Steve Jobs was directed by Danny Boyle, the man who gave us Trainspotting and Slumdog Millionaire.