A Tight End in ANY GIVEN SUNDAY

Like Sally Field, Tom Hanks and the late Robin Williams, Jamie Foxx went from TV stardom on a sitcom to win an Oscar for a dramatic performance.  After Foxx's years on the popular In Living Color sketch comedy show in the1990s, he played Jamie King on a sitcom called The Jamie Foxx Show (1996-2001).  After In Living Color, he did a couple of goofy movie comedies like Booty Call and The Great White Hype.  He also did a very nice sophisticated comedy called The Truth About Cats and Dogs.  He did two other movies that really made me take notice of his versatility.  In one, he put on a jockstrap and played an NFL superstar.

The other was a most entertaining and sophisticated crime thriller that I reviewed on Lifetime TV.  Bait was a 2000 bust at the box office.  It deserved a better fate.  Foxx plays a petty thief, jailed for stealing shrimp.  In jail, he hears about a bigger crime.  His cellmate was busted for stealing $40 million in gold and he double-crossed partner.  The feds eventually release the petty thief and use him as bait to catch the double-crossed partner.  This was basically the kind of script that would go to Robert Downey Jr.  It was so cool to see Jamie Foxx do it opposite  Kimberly Elise as the love interest.  There's humor in the movie and a touch of Hitchcock.  It's a fun movie.  Before Bait, Jamie Foxx got cheeky in a 1999 movie for Oliver Stone.  The football drama was Any Given Sunday.  Foxx also got to give his dramatic acting muscles a serious workout in a good role opposite Al Pacino. 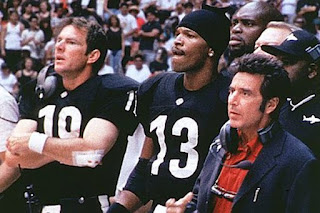 It's the Old School vs the New School way of playing the game.  Foxx's showboat character is definitely of the New School.  Pacino plays the coach whose job is on the line.  Foxx shines as quarterback Willie Beamen.  Movies directed and written by Oliver Stone tend to have a touch of homo-eroticism about them, if you will.  And they don't shy away from violence.  The opening 20 minutes are a Sunday game that presents the players as modern-day gladiators practically fighting to the death.  It's violent and runs too long.  But running too long is also a Stone trademark.  He gets excessive.  He celebrates the male form and masculine image with plenty of blunt nudity in the locker room scenes.  Full backside shots.  Full frontal shots. 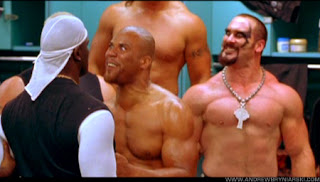 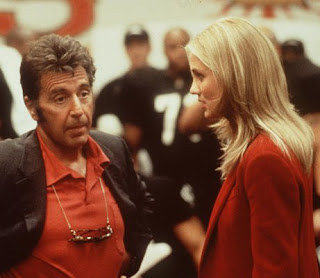 Any Given Sunday may run a bit too long and it may be excessive, but that doesn't mean it's dull.  This movie's got some juice and, as I wrote, you will really be impressed Jamie Foxx's performance.  Pacino is excellent.  Of course he is. 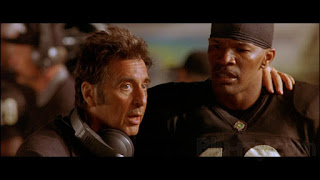 One more thing.  I saw this movie on the big screen.  I wanted to check for a name in the closing credits.  A lot of folks left the theater as soon as those credits started rolling.  A bunch of us stayed.

Those of us who stayed...saw how the movie really ended!  Halfway through the credits, there was one more key scene that made us say "Whoa!"  Keep that in mind if you rent the DVD.  Don't stop it when the end credits start rolling. 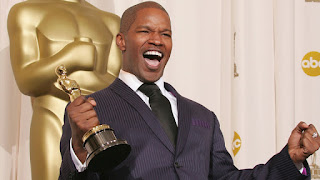