Back in 2008, I worked on a national weekday morning radio show with Whoopi Goldberg. Whoopi rarely plugged the show when she did TV appearances during those years but she did indeed have a radio.  Wake Up with Whoopi aired from 2006 to 2008.  We did the show from hear the Broadway theater district in New York City.  She the show was unfortunately canceled, she'd already started her stint on ABC's The View.  On the radio show, I sat next to her and did film reviews plus other entertainment news reports.  One movie I saw was not a big box office hit, but I liked it a lot.  It was directed by Kimberly Peirce, the woman who directed Hilary Swank to a Best Actress Oscar victory for Boys Don't Cry.  The director's 2008 release focused on Iraq war veterans and the toll that war took on their lives.  The movie was STOP-LOSS and one of its cast members was Channing Tatum. 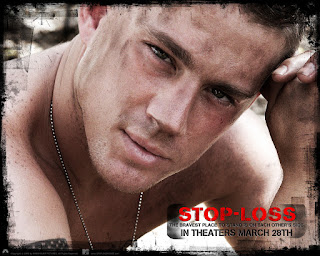 The title refers to a clause in military contracts, one so controversial that it became the focus of a CBS 60 Minutes piece.  In the movie, young veterans return home having served their tour of duty in the Iraq war.  But the stop-loss clause in their military contract (explained in the film) is activated and their ordered back to Iraq to serve again. 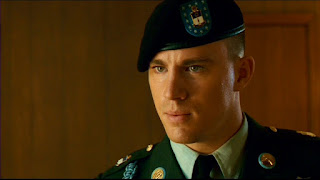 This clause had never been mentioned or explained to them when they enlisted.  When I told co-workers in the studio about the movie, one responded that he had a relative who was going through the exact same thing.  He served, he came home, and then he got hit with the stop-loss clause.  Channing Tatum was not a big movie star that time.  He was getting attention and was a very popular screen "hottie."  His looks were a major selling point so it was pretty much standard issue to see him shirtless or in his drawers -- or even less -- for at least one scene to carbonate the hormones of his fans. 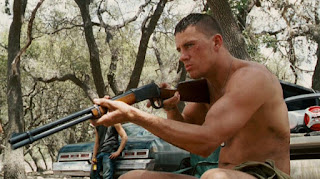 In that regard, this military drama was no different.  That's the movies.  In Stop-Loss, I really took notice of Channing Tatum.  The star of the film was Ryan Phillippe.  Tatum played one of the lead character's best friends.  OK, let's face it.  Tatum may not have the acting range of Daniel Day-Lewis or Johnny Depp. But Stop-Loss proved that he was more than just hot young beefcake.  You saw a young man pushing his talents as far as he could to play the character.  He committed to the role.  He took his craft seriously and that was exciting to watch.  I knew he'd become a movie star -- proven with the box office receipts and attention he got in Magic Mike -- and he'd evolve from movie star into actor -- which he did quite well in Foxcatcher.  When I saw his exceptional work in Foxcatcher, I was not surprised.  I knew he'd deliver those dramatic goods one day.

Tatum can do drama.  I totally dig when he does comedy.  I didn't see his 21 Jump Street but he has a part spoofing himself in 2013's This Is The End, a West Coast apocalypse comedy, that just broke me the heck up.  You just have to see it.  Seth Rogen, James Franco, Jonah Hill and Craig Robinson are some of the lead actors, so that let's you know what you're in for.

A couple of year's ago, he was presenter on the Oscars® telecast.  He did a brief and elegant dance number with Charlize Theron.  This weekend, moviegoers can see him dance again.  The new Coen Brothers movie has gotten very good reviews.  A couple of critics have written that this Old Hollywood comedy is one of their best.  See Channing Tatum's in military uniform again -- this time with his dancing shoes on.  Here's a trailer for HAIL, CAESAR!

Yesterday, one entertainment news site printed the report that director Steven Soderbergh may come out of retirement to direct a new movie.  If so, that new movie may star Matt Damon and Channing Tatum.  Very cool.