I noticed a big billboard in the cineplex lobby on my way out from having seen (and loved) Birdman.  I was in the big cineplex across from Manhattan's Lincoln Center. 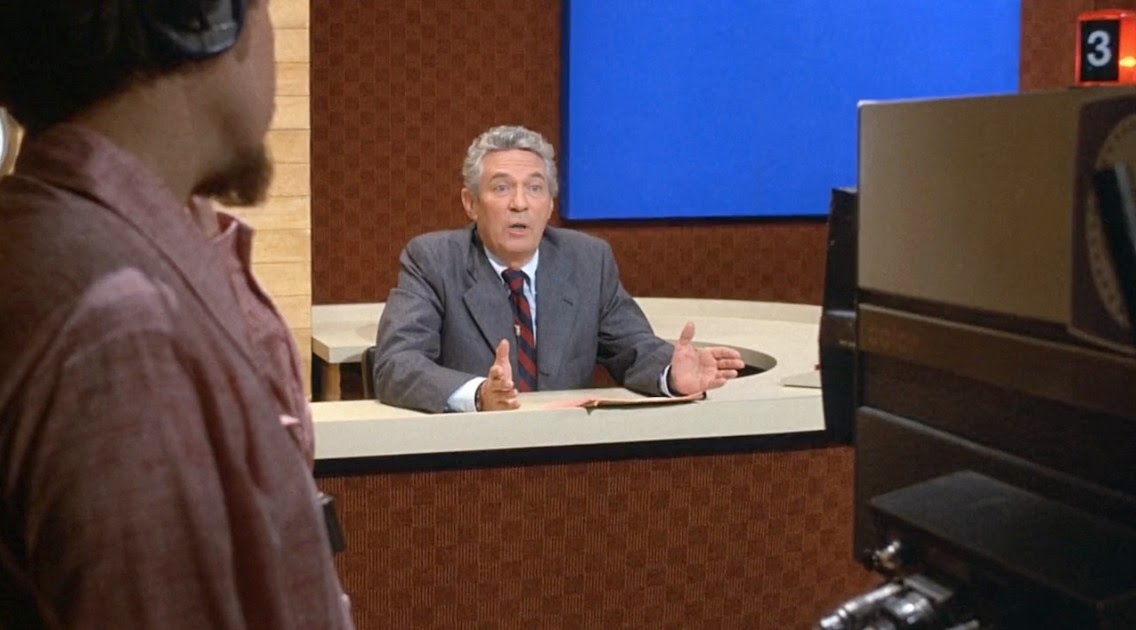 He has an emotional breakdown and he becomes delusional.  His delusional state gives way to rants, angry rants that are televised live on the air.  Faye Dunaway plays the soulless network executive who manipulates Beale's madness into big ratings for the company. 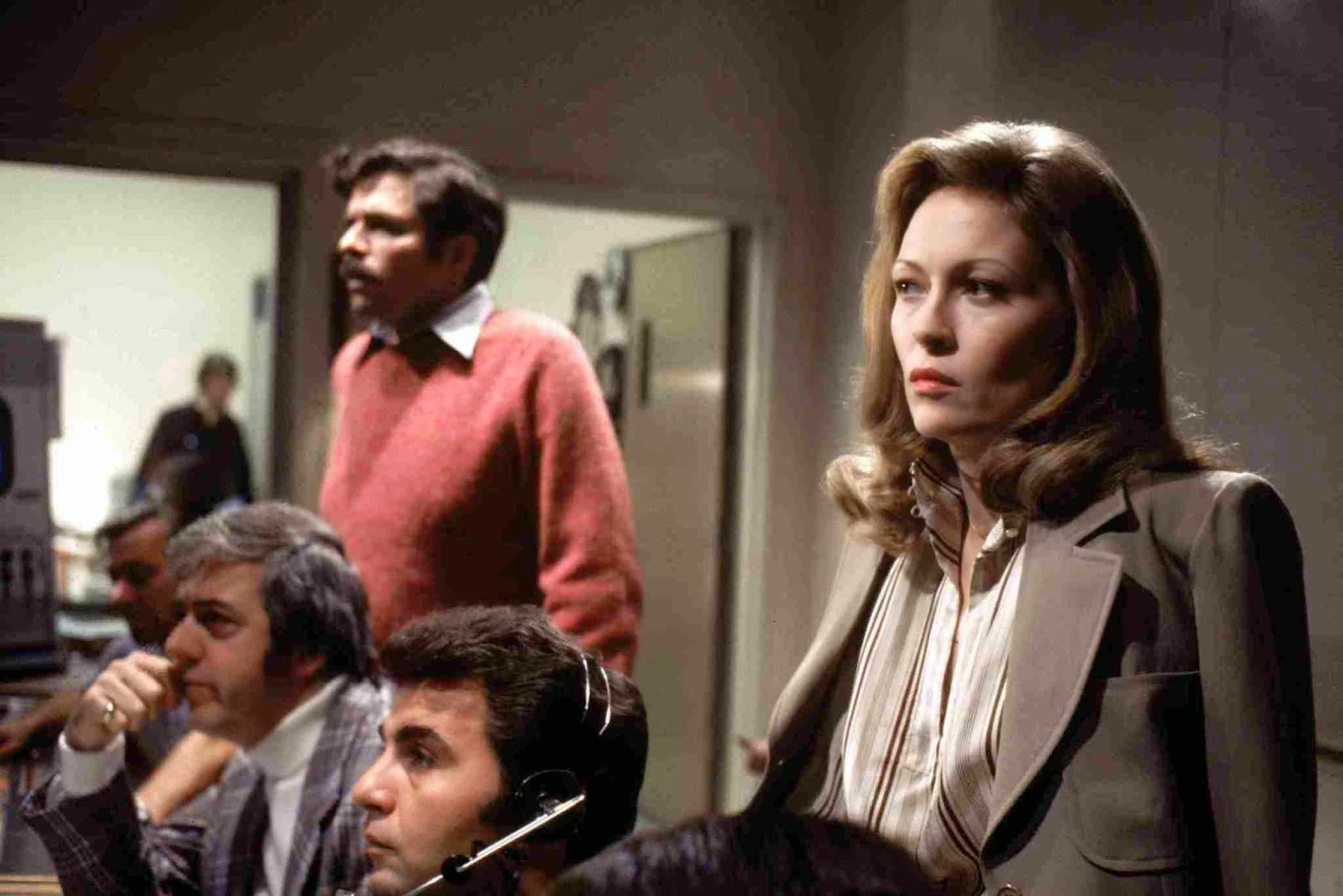 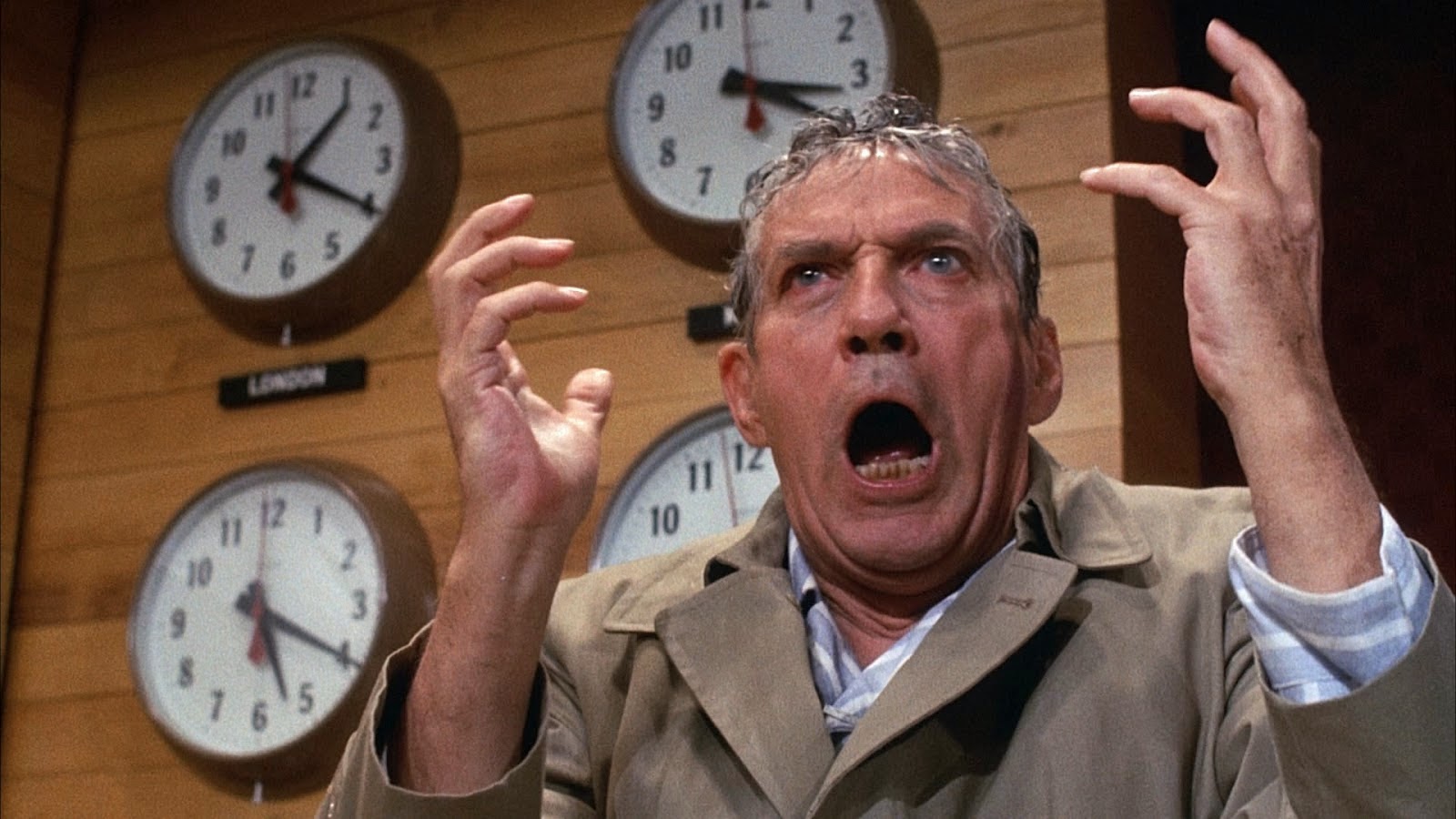 She introduces the change of the set and the new format for the newscast headed by Howard Beale, now the "mad prophet" of the airwaves.  Beale's new format has a studio audience. 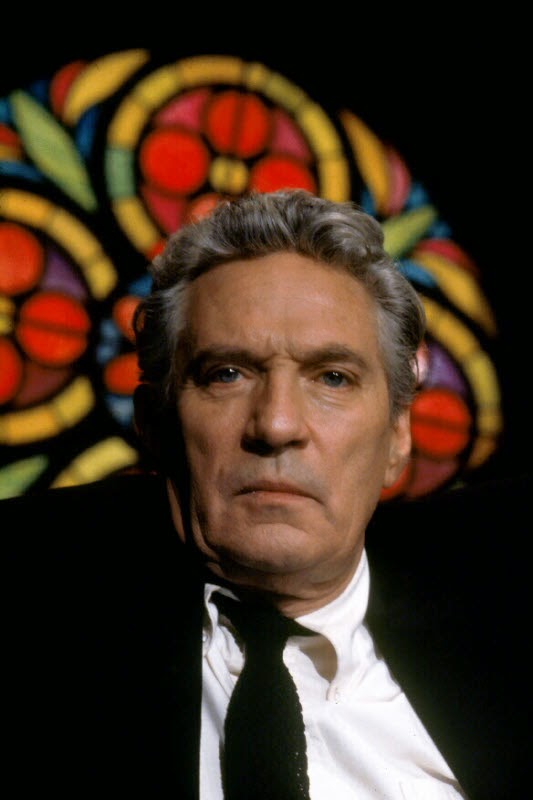 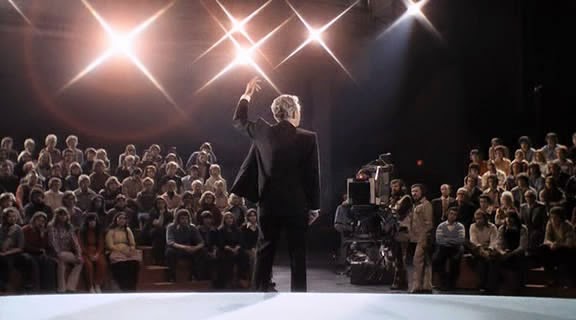 A studio audience that laughs and applauds and cheers during the news.  Diana (Dunaway's character) has erased the line between news and programming.

I saw Network in its theatrical release.  I saw it several times, it was that good.  Movie audiences always howled with laughter at the sight of a national newscast with an applauding studio audience.  We TV viewers were still in the Walter Cronkite era then.  We still had a line between news and programming. It was slimmer than before, but it was still present.

I used to hear people talk about the news features done by Cronkite or Peter Jennings -- or the editorials by Eric Severeid and the investigative reports by journalist pitbull Mike Wallace on 60 Minutes.  It's different now.  Today millions of TV viewers talk about and are devoted fans of satirical newscasts with studio audiences that laugh, applaud and cheer.  Actor/comedians are asking harder, more probing questions than some TV journalists are.  These hugely popular actor/comedians who give us the news are...Jon Stewart, the most popular host of The Daily Show... 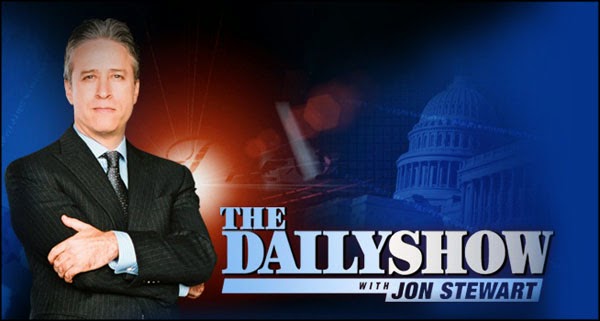 ...and Stephen Colbert of The Colbert Report. 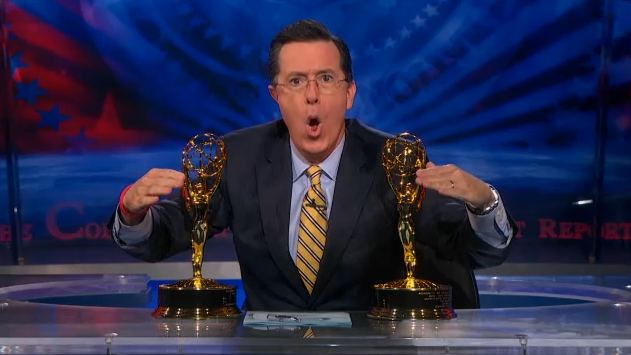 I bet that, if either one of them guest anchored the CBS Evenings News for one week during November sweeps, its ratings would increase big time.  The ratings would top what CBS anchor, Scott Pelley, gets.  Just my opinion. 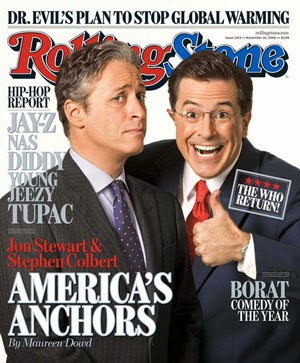 We look to fake newsmen to get more fulfilling news reports.  They rant in a way that touches our wounded hearts and minds in the same way Howard Beale's "I'm as mad as hell" declaration connected with his national TV viewers.  And I can understand why.  Stewart and Colbert do incisive, intelligent, provocative, bold and compassionate work.  They make you think.  They make you laugh.  And they make you cheer.  Theirs are the reports folks talk about the next day.  Theirs are the reports that get posted on Facebook and Twitter.  Just like in Network, viewers turn to a news show with a studio audience and an untraditional format.  Life has imitated art.

I thought of all that when I saw this billboard in the cineplex lobby.  It was full of rave reviews for a new political drama, directed and written by Jon Stewart.  Notice the words "the world's leading fake newscaster." 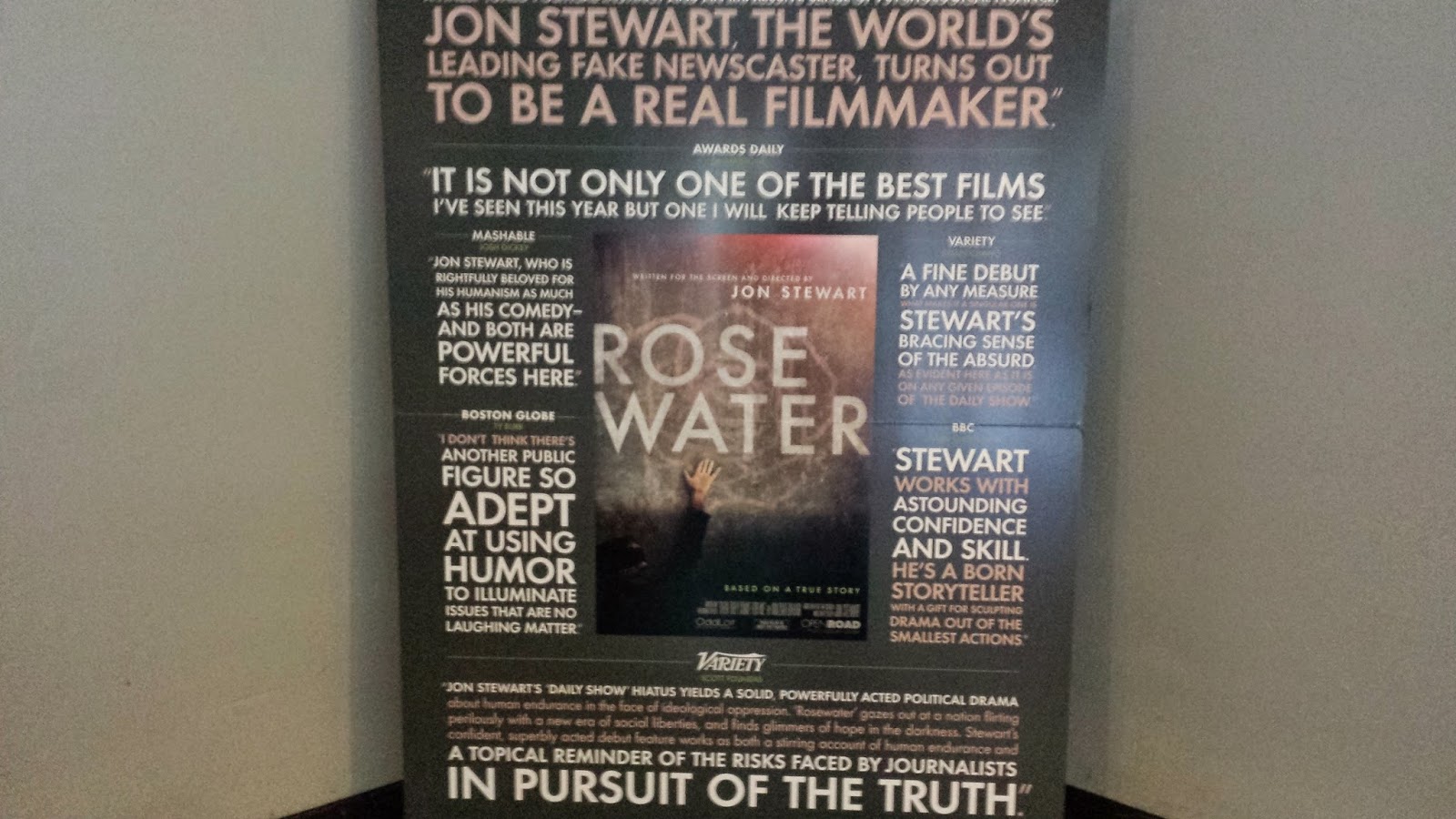 I wish Paddy Chayefsky had lived long enough to be a guest on The Daily Show with Jon Stewart to discuss the state of TV journalism today.  That interview would rock and folks would definitely talk about the following day.