"It's a hard world for little things."  ~Lillian Gish as Rachel Cooper in 1955's The Night of the Hunter 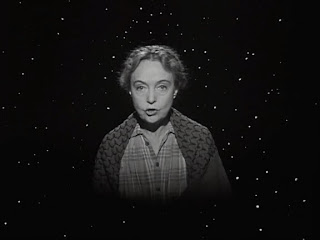 That chilly, clear Friday morning was a happy one for me.  Unexpectedly, I was back in New York City during the Christmas season for a few days of freelance work.  I felt as though my too-long bad dream of unemployment was nearing an end.  I'd been contacted and hired to do a couple of a features in Manhattan for a national cable television show.  Our crew was setting up in Sotheby's Auction House when I logged on to the online edition of The Los Angeles Times and read that one person had been killed in a shooting at a school in Connecticut.  We had get to busy with our Sotheby's feature taping.  Two hours later, our audio man got a call asking if he could do audio for a German TV crew covering the story in Connecticut.  I logged on to The Los Angeles Times again after he hung up his cell phone.  We were all shocked to learn that the total dead was now 20.  Then more.  And most were youngsters.  I felt as though our too-long national nightmare was recurring.  A modern-day Norman Bates darkened the red, green, silver and gold of the holiday season with a sick crime.  I describe the young twisted man as a modern-day Norman Bates in Psycho because, like that famous Hitchcock movie character, he reportedly killed his mother and then killed the offspring of other mothers.  In 2012 alone, we lost too many children to madness with guns.  Trayvon Martin in Florida early this year.  A 6-year old child was one of the victims in the Aurora, Colorado movie theater shootings over the summer.  The grade schoolers in Connecticut last week.  I am not exactly what one would call a religious man but I was moved to stop by a Catholic church and pray for those children and their grieving families.  I also said prayers of thanks for all good, dedicated school teachers for they are America's other first responders.  Let us never forget those teachers who perished protecting children during that attack in Newtown, Connecticut.  May they all sleep in heavenly peace this Christmas.  May our nation wake up, take action and end this nightmare.  Rights must be rooted in responsibility.

Rachel Cooper was a teacher and a protector of children in The Night of the Hunter.  If you've never seen it, put this black and white cinematic gem on your holiday viewing list.  It's a Christmas tale -- and a Bible story.  Children are taught to beware of wolves in sheep's clothing.  False prophets.  The false prophet in this simple, powerful story is a psycho murderer pretending to be a preacher.  He quotes the Holy Book yet he kills and steals.  The religious fanatic is bloodthirsty for money two little children have. 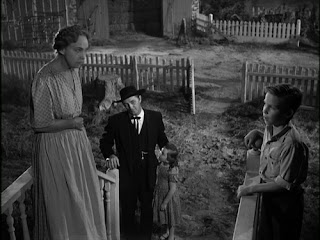 His wicked tricks are no match for the steely toughness Rachel Cooper summons up when protecting the Depression era country orphans who have her as a foster mother. 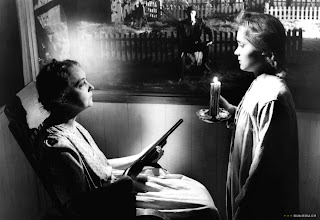 Robert Mitchum delivered one of the finest, most memorable performances of his film career as Harry Powell, the evil preacher.  Equally excellent was screen legend Lillian Gish, an actress who became a major movie star before the 1920s.  She starred in D. W. Griffith's Intolerance in 1916.  I first saw The Night of the Hunter on local television when I was in middle school.  I've loved it ever since.  It's one of my favorite films to rent during the Christmas season.

Rachel Cooper:  "A good tree cannot bring forth evil fruit.  Neither can a corrupt tree bring forth good fruit.  Wherefore by their fruits, ye shall know them." 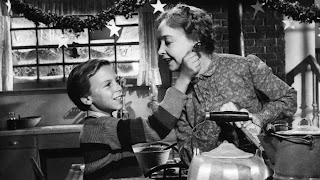 The Night of the Hunter, now considered a Hollywood classic, is the one and only film directed by Oscar-winning actor Charles Laughton (1935's Mutiny on the Bounty and Ruggles of Red Gap, 1939's The Hunchback of Notre Dame, The Canterville Ghost, Hobson's Choice, Billy Wilder's Witness for the Prosecution and Stanley Kubrick's Spartacus).  Most American movie critics didn't appreciate this 1955 feature.  Laughton was so crestfallen and disappointed that he didn't direct another film due to its tepid critical reception.  What a shame.  While I was in New York, I also met with the producers of the TV pilot that I taped a few months ago.  It's film-related -- and a show that would work to keep what discouraged Laughton from happening to other good directors in the future.  It's my way of making a positive contribution to society and supporting an art form that I love -- films.