When I was a kid in grade school, middle school or high school, I always loved those special moments when a favorite teacher of mine would beam with wonder and delight at a student's discovery.  A classmate could've made an inspired connection between to opposite points in culture or figured out a solution on his or her own.  What made those times so great was that the student wasn't simply repeating back information taught by the teacher -- like a parrot.  There was some originality of thought and self-discovery.  This always put a glow and amazement in teachers' eyes, causing them to look at a student as if they were looking at a magnificent fireworks display.  I had an experience like that this week with one of my nephews' best friends.  He took a break from playing with them, came over to me and asked, "Have you ever seen It's A Wonderful Life?" 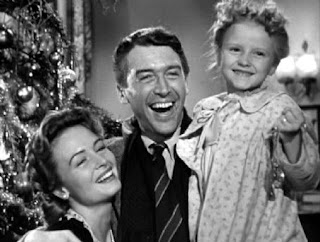 That question -- from a 9 year-old boy -- was like hearing church bells on Christmas morn.  "Yes," I enthusiastically answered, "I have seen It's A Wonderful Life.  I love that movie."

He smiled a big smile and said that he loved it too.  He added, "that movie is...heart-touching."  I had never, in my entire life, heard that word.  But, out of the mouths of babes, came a rich new adjective for that Frank Capra classic:  "heart-touching."  Wow.  Sometimes a moment is so magical that all one can say is "Wow."  I got a "magnificent fireworks display" feeling.  Although I'm not a teacher, I knew exactly how my favorite schoolteachers felt at such moments.  It got even better.  He made a connection between the Ghost of Christmas Past and the Ghost of Christmas Future in Dickens' A Christmas Carol and Clarence the Angel giving George Bailey a look at his past and future.  I know people almost thirty years older than Alex who haven't made that connection.  And some of them are entertainment reporters.  Then he talked about Stephen King movies.  Scary ones.  He wondered how King came up with those ideas.  I told him that I heard Stephen King in an interview say that he constantly visited the library when he was young and read a lot.  I also told Alex that not all his stories are scary.  In fact, Stand By Me -- a coming of age tale -- is a movie that he could probably watch at home with his parents.  Based on a Stephen King story, it's really good and exciting but not scary with any demonic creatures.

Alex is a great kid.  A down-to-earth little boy with a warm, golden spirit.  You can tell it's a shared light that comes from his parents because that bright, shiny apple has not fallen far from the tree.  He'd have been a memorable movie kid in a classics like The Yearling, Shane, Old Yeller, a Steven Spielberg movie like E.T the Extra-Terrestrial or, yes, Stand By Me directed by Rob Reiner. 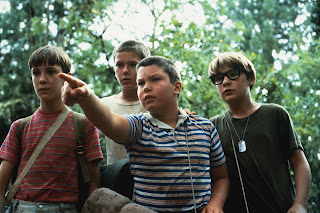 I went on to tell him that one of Stephen King's favorite writers was Mark Twain.

"Remember at the end of It's A Wonderful Life when George Bailey gets a book that was signed by Clarence the Angel?"

Alex remembered.  I told him "That book was The Adventures of Tom Sawyer written by Mark Twain." 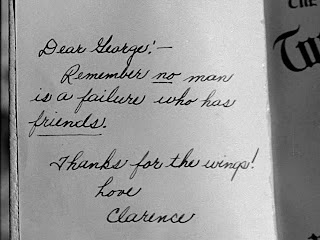 A youngster with an appreciation for a 1940s film in black and white.  A film that he finds "heart-touching."  To discover that someone so young has an affection for a classic contribution to the fine arts was a thrilling holiday highlight for me -- like George Bailey finding Zuzu's petals in his pocket.

What a wonderful experience thanks to It's A Wonderful Life.  Director Frank Capra would've loved it.