How I love this movie.  How I love the work of the man who wrote and directed it.  Wise and prophetic in presenting how TV journalism is packaged and delivered to us viewers, Broadcast News, written and directed by James L. Brooks, is now a Criterion Collection DVD.  Mr. Brooks was one of my favorite VH1 talk show guests when his film was new.  He told me that Hollywood great Jean Arthur was his muse when writing Jane Craig, the news producer richly played by Holly Hunter.  Hunter, William Hurt, Albert Brooks and James L. Brooks all scored Oscar nominations for this fine film. 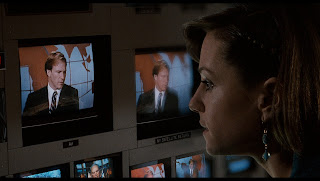 After my VH1 years, I practically ached to host another celebrity talk show. And to be offered the opportunity to host one.  If I had been successful in getting another show in the 1990s, I wanted to interview James L. Brooks again and get his current views on TV journalism.  I'd really like to talk to him about today's state of broadcast news.  His 1987 film was just as strong as Paddy Chayefsky's Network in 1976.  It's a solid, smart, substantial vision from someone who knows how television works. 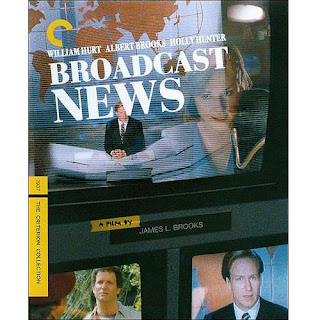 Jane Pauley was a co-host on NBC's Today show when Broadcast News came out.  I like Jane.  I remember a comment she made about Brooks' film.  She basically said that TV doesn't really work that way.  She was referring to the way William Hurt's character ascended to network news stardom without having had major hard news credentials.  In the early 1990s, I worked briefly with Matt Lauer.  We were new to WNBC local news.  Matt was anchoring newscasts.  I did entertainment features.  He didn't exactly get a warm embrace from most of the veteran male anchors.  He was considered a "pretty boy" who came from the programming side of television.  Definitely not a serious journalist.  Now Matt Lauer is a famous Today show co-host who makes at least $20 million as a star of NBC News.  Yes, I'd really love to talk to James L. Brooks again.  Many of us African-American TV viewers are very grateful to Brooks.  Before his Oscar victories for writing, directing and producing the 1983 Best Picture, Terms of Endearment... 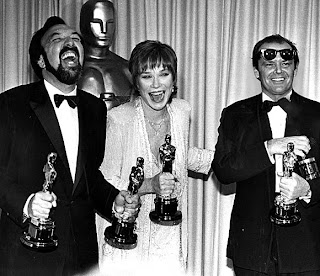 ....which also mined Hollywood gold for Shirley MacLaine and Jack Nicholson...before his Oscar nominations for Broadcast News...he gave television Room 222.  What a quality show!  I'd talk about episodes the next day with classmates when I was attending a high school in South Central Los Angeles.  The racial diversity of our classrooms and communities was reflected on that show.  It was reflected in the lead characters and supporting cast.  Created by Brooks, it premiered in 1969 and aired through 1974. 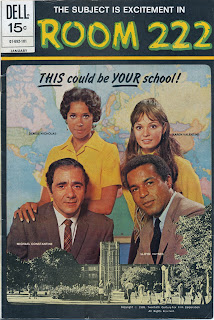 The diversity on this ABC series about a high school is still relevant.  Cut to the 1990s and popular shows set in New York City.  You wondered if the production team was aware that there had been a Civil Rights movement at all.  Not a black or Latino lead or supporting regular in the cast.  And the shows took place in Manhattan.  (Think Friends, Seinfeld, Sex and the City).  We loved Room 222.  Seeing Lloyd Haynes as History teacher Pete Dixon and Denise Nicholas as Miss McIntyre was so significant for us young black viewers.  We had black teachers.  I attended Catholic schools.  We had black and Latino priests as teachers.  By the way, how often to you see black Catholic priests portrayed on television today?  Rarely, if at all. 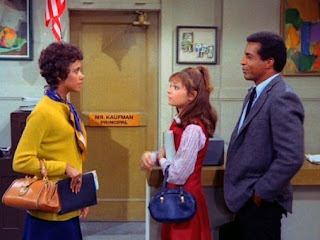 Brooks left that project to help shape a new one called The Mary Tyler Moore Show.  That too embraced diversity.  In the late 1960s and early '70s, if you saw a black man broadcasting on a local TV newscast, he was doing sports.  That's just the way it is was.  Los Angeles TV was no exception.  Brooks lampooned that by introducing Gordy Howard.  John Amos played Gordy.  Folks in the newsroom meet Gordy and assume he'll be doing sports.  Wrong.  He does weather.  I loved that hip in-gag in the first episode with Gordy.  In my home and in my neighborhood, we all got it.  We all appreciated it. 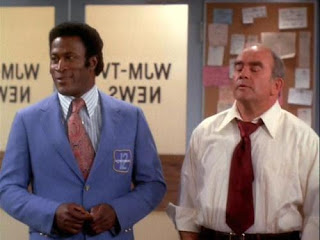 In Minneapolis, there was a black man on Mr. Grant's WJM news team in the first seasons of that classic sitcom.  Again...major diversity.  There were only two black people on the Today show in its first 50 years -- Bryant Gumble and Al Roker.  Half a century.  Only two.  In Manhattan.  James L. Brooks was a gracious, generous, witty and interesting guest on my VH1 talk show.  I'm in my research, I'd read that there was a gay male character in Broadcast News.  As respected and honest as Jane Craig, he's on to the hollowness of anchor-hopeful Tom Grunick before she is.  Brooks loved that character but had to cut that storyline out because it made the movie too long and altered the rhythm.  Brooks appreciated that I'd done my homework.  Apparently, there was juicy, telling scene in which the gay co-worker -- very influential with newsroom management -- casually flirts with Grunick knowing that he's straight.  He's not serious about the flirt but he detects that the ambitious on-air talent is fully aware of who can help advance his career and will use any opportunity to advance it. 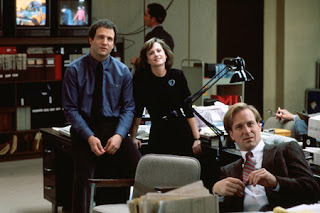 After our interview, Brooks told me that, if an agent or manager of mine ever wanted to set up a meeting with him, to contact him on the 20th Century Fox lot where he worked on The Simpsons.  I had a national talk show, but I did not have an agent.  After my VH1 contract expired, the record producer/manager who made Bobby McFerrin a Grammy winner for 1988's "Don't Worry, Be Happy" was interested in branching out to represent TV talent in addition to music talent.  The Universe sometimes works in wacky ways.  She and I both had to be in L.A. at the same time for different things.  I was shooting an infomercial.  I told her about Brooks and she contacted his office to request a meeting.  We thought, if we hear anything, we'd hear back in a couple of days.  She heard back within the hour.  James L. Brooks was a man of his word.  We booked an appointment.  We rehearsed what we'd say so we'd not waste his time.  We could get in and be done in 15-20 minutes.  Brooks gave us nearly one hour of his time and told her how to package and re-pitch me.  Sage advice from a man with Emmys and Oscars on his shelves. He liked my host work and said I should do another talk show.  He mentioned to Linda that there was definitely room for and a need for another black person to do an entertainment talk show.  He warned that unimaginative execs might want me to be "more like Arsenio."  He said that Arsenio Hall and I are two different types and there's room for us both.  Linda Goldstein and I were thrilled to have had that meeting.

She was pregnant with her first child then.  After her baby was born, she decided to focus more on being a mother to that beautiful child and not take on any more clients.  Lucky for the baby.  Unlucky for me.  But I totally understood.  I never got packaged and re-pitched to Brooks. I had no representation.  However, to this day, I'm grateful for the time he gave me -- and for the upscale, inspired racial images he gave minorities on television.  By the way, long before Will & Grace, Rhoda Morgenstern had a great time dating a gay guy, someone related to another character on The Mary Tyler Moore Show.  Here's one more thing I'd bring up to Brooks if we could chat again about Broadcast News: 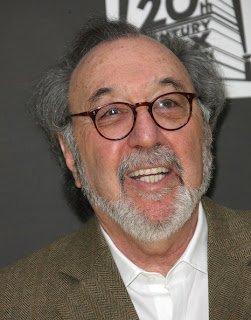 A little bit like the last episode of The Mary Tyler Moore Show, new management came into position at VH1.  A lot of us didn't get our contracts renewed or were otherwise laid off.  On our team of veejays, there was one who spent less time in taping her work than the rest of us did.  A lovely blonde Christian from Texas who liked cute boys and soap operas on daytime TV -- so she told us -- she would basically say "Coming up next, Fine Young Cannibals" and could tape two days worth of veejay segments within an hour.  She was so Christian that she wouldn't tape her veejay segments on the set at Christmastime until the menorah was removed from the "celebrate everybody" holiday theme. We always had several newspapers in our studio and CNN played constantly on a monitor.  She never watched the news.  Never read the papers.  She read soap opera fan magazines.  After we on-air talents were notified that we'd been laid off, she was the first one who proudly announced that she'd gotten a job.  She'd be a news anchor in Pennsylvania.  One of the other veejays half-teasingly said, "How are you going to anchor a newscast? You never watch the news and you never read a newspaper?"  She tilted her pretty head to one side, smiled and said, "They'll tell me what I need to know."

In time, she became a high profile network anchor on Fox News.  I kid you not.