There I was, having a little snack and listening to yuletide cuts on my Billie Holiday Christmas CD -- "Gimme a Sleigh Ride and a Bottle of Beer," "Rudolph Sings the Blues," "Gloomy Santa" and the haunting "Strange Fruitcake" -- when it happened.  I was contacted to speak with a TV producer and that very same producer offered me a few days freelance TV work -- paid work -- back on the original Island of Misfit Toys.  Some of you call it Manhattan.  I don't know how that executive producer found me but I'm glad he did.  I am so grateful for this great opportunity. A brief return to New York City. Wow. 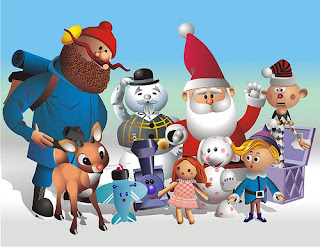 Last year at this time was quite financially and emotionally rough.  This year's been financially rough too but family drew closer and there were other good things.  I did a TV pilot.  I'm quite proud of that show, my co-host and my producers.  I pray the show gets picked up.  I had a pitch meeting with a TV exec.  OK, let's face it.  Some hit shows on TV right now are not exactly "Masterpiece Theater."  With that in mind, I came up with ideas that would be high on mainstream entertainment but not intellectually intimidating.  To cable's TBS, I pitched a Harlem beauty parlor sitcom called "Weave Only Just Begun," another one about a wacky crew of predominantly black firefighters called "Where My Hose At?" and a third to star Tia and Tamera Mowry as black Mormon brides new to Salt Lake City in "Sister, Sister Wives."  Remember them?  They're all grown up now.

Well...TBS is very, very busy with the Tyler Perry productions.  But I didn't give up.  Maybe that was the lesson I learned the most this year.  Don't give up, be willing to reinvent yourself and keep a positive attitude -- even though that may be the biggest challenge of all.  I haven't had steady work in two years.  Like millions of other Americans who were getting by, living within their means and even helping relatives, I fell below the poverty line because of job layoffs and this recession.  But family took me in.  I have a place to stay while I start over.  Last December, I almost lost my mother.  My sister literally saved her life the day after Christmas.  This December, on the phone, Mom has made me laugh so hard I cried.  Tears of joy are so much better than what could have been.  So, yes, I'm still flat broke.  But I'm counting my blessings.  And I've got a couple of days paid employment coming up.  I'd really like a new TV gig and a book deal.  I think I've got good lessons and observations to share.  Two years ago, I lost my modest longtime apartment in New York City.  In all the turbulence and humiliation that followed, I really found a new part of myself.  Does that make sense?

Anyway, I'll be off blog for a week or so while I gratefully rejoin the workforce for a few days.  Until I return, I truly...madly...deeply wish you a wonderful holiday season.  May your most special wish be granted.  Thanks for the pleasure of your company.