Love in TO KILL A MOCKINGBIRD

I love being an uncle.  I have two nephews.  One is 9.  The other is 12.  One evening last month, that great movie, To Kill A Mockingbird, aired on TCM (Turner Classic Movies).  I told that boys that it's based on one of my favorite books, a book they should read one day.  Slowly, gently, I'm trying to introduce them to classic films and lead to them to discover that film is not just entertainment.  It's a fine art.  It's a source of communication.  It can bring people together and add cultural light in shadows of the mind.  Movies can educate.  Movies have their own literature.  It's in the visual details.  We know from the beginning that To Kill A Mockingbird will present a child's view of the world.  How do we know this?  The opening credits with the cigar box.  What once held smoking items for a grown man became a mini-treasure chest for youngsters. I had one in parochial school.   As it opens to show us what's inside, that's the clue that director Robert Mulligan will be taking us into a special world of children.  Harper Lee's Pulitzer Prize winning novel was adapted into a screenplay by Horton Foote.  He won an Academy Award for this work. 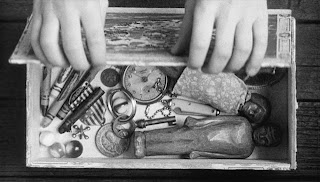 We know that the youngsters are Jem and his sister, nicknamed Scout.  They're the children of a Atticus Finch, a widower and a good lawyer.  Good in that he is committed to justice and shouting down intolerance.  ("Atticus says cheating a black man is ten times worse than cheating a white.")  Atticus will shout down intolerance even if it makes him unpopular in town, as his children will learn when their father defends Tom Robinson, an innocent black man accused of raping a white woman.  They live in tired old Southern town in the early 1930s. Gregory Peck won the Best Actor Oscar for this classic. 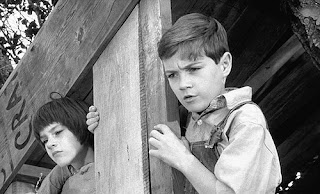 Scout was so young when their mother died that she can't remember as much about her as her big brother does.  Was Mama pretty?  Was she nice?  When Atticus hears his children talk about the late Mrs. Finch, you can tell how deeply in love with her he was.  Her death left a space that no other woman has filled by his side.  On the front porch swing, Atticus always sits to the left corner of it.  You just know that Mrs. Finch always sat on the right side.  In the heart of single father Atticus Finch, she still occupies that space. 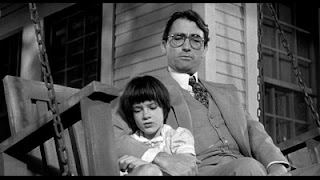 What about you?  You've seen To Kill A Mockingbird.  What did Mrs. Finch look like?  If we pay attention to the art direction, the literature of this film, we may see her likeness.  The placement and attitude of a certain likeness is no coincidence.  Jem and Scout were attacked on their way home from a Halloween pageant at school one evening.  Scout was dressed as a ham.  They were attacked and mysteriously saved.  "Someone's been after my kids," Atticus tells Sheriff Tate on the phone while Scout assures him the she's okay.  Jem is on a bed.  He's fine.  Scout, a faithful sister, is beside her brother.  Sheriff Tate enters his room and stands at the foot of the bed.  Look behind Sheriff Tate.  On the mantlepiece.  There's a framed photograph of a young woman with a sweet countenance and long hair.  With the angle of its placement,  the woman seems to be smiling at the two youngsters.  Who do you think that is?  I think it's the late Mrs. Finch.  Notice the presence of this photo after Scout spots another person in the room.  He's hiding.  He's afraid.  He's harmless.  Scout says, "Hey, Boo." (Robert Duvall in his film debut) 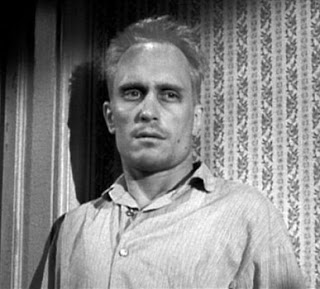 Boo Radley.  The poor, disabled, misunderstood and shy soul is their rescuer.  As little Scout extends her hand in kindness, reaching out to bring Boo from a dark corner into a comfortable and welcoming place, the gentle face in the framed photograph oversees the action.  I have long had the feeling hers is the face of Jem and Scout's mother.  It's as if Mrs. Finch is smiling from Heaven and saying, "I'm so proud...so very, very proud of my little girl.  What goodness I left behind.  I'm so proud."  We don't often notice that framed picture.  But it's there -- and there for a reason.  It tells us something about the scene and the characters.  I love that one detail.  At the end, because of it, I feel as if Jem, Scout, Atticus and Mrs. Finch are together again in spirit as Older Scout narrates: 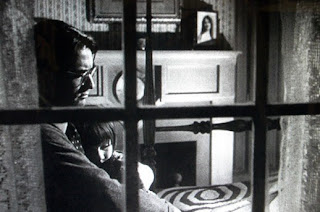 "I was to think of those days many times.  Of Jem and Dill and Boo Radley and Tom Robinson.  And Atticus.  He would be in Jem's room all night, and he would be there when Jem waked up in the morning."

That framed photograph on the mantle.  What a lovely little detail.
at December 02, 2012