Cliff Osmond passed away this week.  He was a Wilder actor -- a Billy Wilder actor.  This piece will be about him and about New York comedian/actor Anthony DeVito. Osmond added extra spark to Billy Wilder's Irma La Douce starring Jack Lemmon and Shirley MacLaine, Kiss Me, Stupid with Dean Martin and Kim Novak, The Fortune Cookie and Wilder's remake of The Front Page.  You may not have known his name, but he was one of those supporting actors who presence got a "Oh, there's that guy!" kind of reaction from viewers.  My favorite Osmond movie performance was his work as Chester the insurance investigator in Wilder's under-appreciated look at 1960s race relations above the Mason-Dixon Line, The Fortune Cookie. 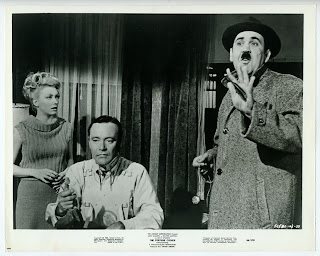 A full-figured, moon-faced man often seen with a mustache, Cliff Osmond seemed to be in action even when he was standing still.  He was always thinking -- and that played so well on film.  The Fortune Cookie is famous today as the first film to team Jack Lemmon and Walter Matthau.  Matthau won a Best Supporting Actor of 1966 Academy Award as the dishonest lawyer who sees a sports TV cameraman's injury as a potential financial bonanza.  The Double Indemnity director returns to the insurance game, this time for a comic look at greed.  The TV cameraman was accidentally tackled during the live network telecast of a pro football game.  He'll recover but the shady brother-in-law, known to some as "Whiplash Willie," smells big money if the cameraman pretends to be paralyzed.  Harry Hinkle (Lemmon) gets suckered into the scheme because of a possible reunion with his gorgeous  blonde ex-wife.  He's still in love with her but is totally clueless to the fact that she's been tackled by a few hot guys herself.  Her bedroom is a wide receiver. 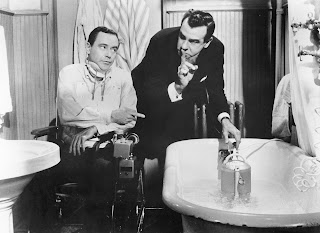 Harry is basically an honest man -- a man who believes in equality and fair play in the game of life.  The NFL star who accidentally injured him during the game is black.  As Luther "Boom Boom" Jackson, Ron Rich wasn't as strong an actor as Lemmon, Matthau and Osmond, but he sure did have leading man movie star looks and carriage.  Jackson and Harry become friends.  Jackson was an upscale black character in a major Civil Rights era motion picture from an acclaimed filmmaker.  Jackson could've left the football field and fit in well as a contributor on the Today show -- if minorities had been contributors on network news programs back then.  This was an important element. 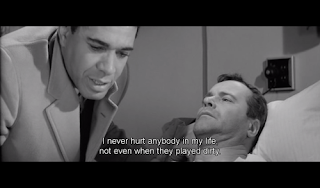 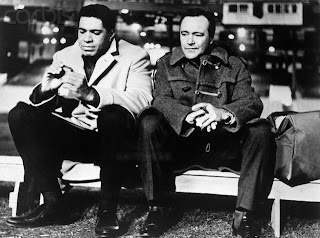 Cliff Osmond's character is shrewd.  He knows that corporate dishonesty, financial greed and racial discrimination can sit side-by-side on the same shelf.  Racism doesn't sit well with Harry Hinkle.  In Hollywood movies, the Deep South is the go-to setting when liberal Hollywood wants to show the evils of racism.  In the Heat of the Night, Mississippi Burning, The Long Walk Home, Driving Miss Daisy, The Color Purple, The Help and the new film Django Unchained (which I haven't seen), all give us Southern-fried bigotry.  Besides the young white woman writing the book about domestics in The Help, who was unquestionably the other full-out white liberal?  The publishing executive in New York City played by Mary Steenburgen.  As Northern moviegoers, we're beguiled into a sense of "Racism -- that can't happen here.  We don't have a Klan here.  We're not like they are down South.  We're better than that.  We get it."  Wilder showed that racism doesn't discriminate when it comes to location.  It just takes on a different attitude and wording.  Jackson, as a  favor, goes to pick up Harry's ex-wife at the airport.  He's dressed as if he's on a page in Esquire magazine.  She assumes he's a chauffeur because he's black.  Then there are comments about black people not being trustworthy, that they're second class citizens.  Wilder nails that subtle Northern form of racism.  He nails it harder with the help of Cliff Osmond's sharp, honest character.  The movie had to shut down for a few weeks while star Walter Matthau recuperated from a heart attack.  Osmond did another Wilder comedy also affected by a heart attack.  In the 1964 sexual farce, Kiss Me, Stupid, Ray Walston replaced Peter Sellers after the British actor was felled with a heart problem.  Osmond played half of an amateur songwriting team in Nevada hoping to get Vegas headliner Dean Martin to listen to and -- if they're lucky -- record one of their songs.

Barney (Osmond) cooks up a scheme to win Dino's attention.  He and his partner will attract the Rat Pack swinger's interest with the help of a local barmaid, Polly the Pistol.  She's a part-time unhappy hooker who dreams of being a plain happy housewife.

When this comedy came out, the Vatican announced that Catholics were forbidden to see it.  As far as the Vatican was concerned, seeing this Billy Wilder movie was in the same category as taking a blowtorch to your grandmother.  Why?  Because it was about sexual and show biz fantasies.  Everybody's fantasy was realized.  No one got hurt.  There was a happy ending.  That was the big threat to the Vatican's archaic views on morality and sex.  Incidentally, the Church denied Catholics seeing Dean Martin in peak form doing a satire on himself.  Kim Novak, whom I'd long been pretty much cold to except in Vertigo, Picnic and Pal Joey, was a big surprise giving a warm, relaxed, touching, funny performance -- one of the best of her film career.  She's a delight as dim-witted Polly.  As good a film as Some Like It Hot?  No.  Hardly.  But Novak's character comedy work is a highlight. 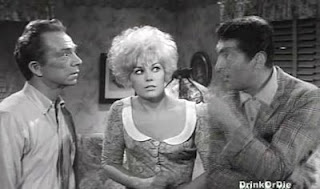 Wilder gave us one of Kim Novak's kookiest and most lovable screen characters. 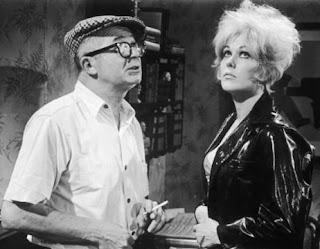 Cliff Osmond's final assignment for Billy Wilder was in the director's 1974 version of The Front Page which again teamed Jack Lemmon and Walter Matthau. 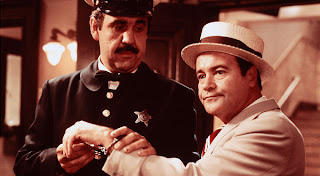 Osmond had extensive television work to his credits.  He could hold his own opposite big stars and make their scenes even better with his talents.  I have a cherished buddy named Anthony DeVito.  He's got solid skills as a comedian and actor.  If he'd been around in the 1960s, DeVito definitely would have been the kind of actor tapped to do supporting character work for Billy Wilder -- like the late Cliff Osmond did. 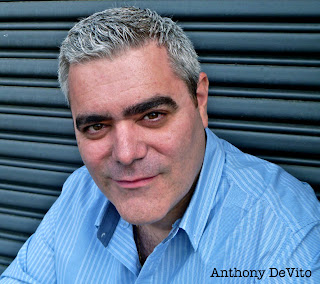 I've seen Anthony act.  He's got the kind of versatility, compassion and comedy skills that would've made him a perfect pick to be a Wilder man.  Honestly, I do not know if he has an agent or manager.  But, if he does, I hope he's being submitted for good featured roles back in New York City -- and not just being sent to play "Italian hood #3" because he's a big Italian guy from Brooklyn.  You may have seen Anthony's stand-up comedy.  You may have seen him act on TV's Rescue Me or Boardwalk Empire.  If Billy Wilder's The Fortune Cookie was being made today, he'd shine in the role of Chester the insurance investigator.  Today's movies need more of those charismatic supporting players that Hollywood had back in its golden era.  People like Eve Arden, Thelma Ritter, Mary Wickes, Phil Silvers, Keenan Wynn, Oscar Levant -- and Cliff Osmond.  Anthony DeVito, someone who gave me great advice and support years ago when I was at an emotional low point, is one who could carry on that tradition.