DJANGO UNCHAINED: Did You See It?

Controversy can often lead to added box office.  The new film from director/writer Quentin Tarantino  is Django Unchained starring Oscar winner Jamie Foxx as Django.  Reportedly, the N-word is used over 100 times in this movie.  Lord, have mercy. 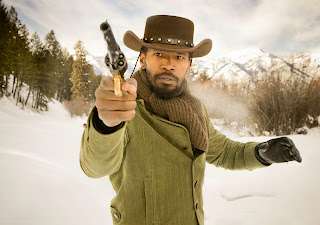 Mr. Tarantino wrote the screenplay.  Have I liked the filmmaker's work?  Yes.  Especially Pulp Fiction and his remake/revisioning of Inglourious Basterds.  However, I have found myself thinking two things as I sit through his films:  1) He could make the same point and have a tighter film at two hours.  It doesn't need to be this long.  2)  I'm really tired of him throwing around the N-word as much as he does.  The second point comes from a guy who grew up as a child of the Civil Rights Era and has felt that sting of that vile word hurled at me by white people.  I cannot comment on Django Unchained because I haven't seen it yet.  If you have, I'd like to read your comments on the film.  Spike Lee, another director/writer who -- like Mr. Tarantino -- has acted in his own films -- had some angry comments about it.  Apparently, Tarantino (who references past movie genres in his productions) borrowed from the 1970s "spaghetti westerns," westerns made in Italy that became popular here in the States.  When Spike on Twitter wrote "American slavery was not a Sergio Leone spaghetti western" and declared Django Unchained "disrespectful to my ancestors," he'd not seen the film.  I sat through Spike Lee's new movie, Red Hook Summer, over the summer.  Oy.  The minutes flew by like hours.  The N-word is tossed about in that one.  A slight follow-up to 1989's Do The Right Thing, we see an older Mookie (Lee) from that movie still delivering pizzas in Brooklyn.  Mookie didn't even move up to a management position.  He's still delivering pizzas and now has hair like Morgan Freeman.  Not one of Lee's best.  On Twitter, I noticed that the folks angered by Tarantino's thrill ride use of the N-word in Django Unchained are black.  I've read six reviews of the film by nationally recognized critics and the overall rating for this slavery western was "very good" to "masterpiece."  These were critics with Entertainment Weekly magazine, The New York Daily News, The New York Times, The Los Angeles Times, National Public Radio and, formerly of TV's Entertainment Tonight, there was Leonard Maltin. Very interesting.  All these critics are white.  Not a one, I'm assuming, ever has been called the N-word or otherwise personally felt the sting of it.  Having a more racially diverse group of nationally recognized weekly film critics would make for juicier film talk.  The dialogue could provide the Hollywood entertainment industry and filmmakers with stuff they need to hear.  There could be viewpoints Quentin Tarantino needs to hear. 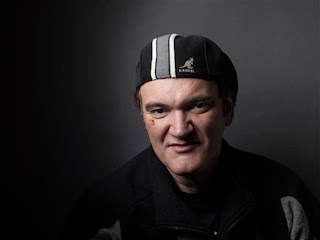 As I've blogged before, there are very few -- if any -- black film critics that American TV viewers can name.  We're over a decade into the 21st century and, still, black film critics are rarely seen on network morning news shows like CBS Sunday Morning where David Edelstein does reviews.  The weekday network morning shows seemed to drop weekly film journalism when networks became wedded to film studios -- like Disney with ABC and Universal with NBC.  But, when they did have film critics, we saw:  Gene Shalit on NBC, the late Gene Siskel on CBS, the late Joel Siegel on ABC.  Siskel & Ebert were in syndication.  After Gene's death, we saw Roger Ebert with Richard Roeper.  Then we saw Ben Mankiewicz and Ben Lyons as a national movie critic duo.  That's pretty much a white boys' club.  I'm positive I wasn't the only black broadcaster who tried for a long time to integrate that field.  I was the weekly movie critic on the ABC affiliate in Milwaukee in 1981, the year Ben Lyons was born.  I was in my second year on the job.  A few summers ago, NBC let Kathie Lee Gifford's son, Cody, do film reviews in the last hour of Today.  He's younger than Ben Lyons.  Full disclosure:  I lobbied to do regular film reviews when I worked for WNBC in the early 1990s.  No luck despite my years of TV and print experience.  From The Color Purple to Do The Right Thing to Hustle & Flow to The Help and now Django Unchained, whenever a film with heavy duty content about black folks opens, it's Caucasian critics telling us minority moviegoers why we need to see it.  On the network morning shows, the contributors talking about film and film-related topics such as forecasting Oscar nominations are usually Caucasian.  Throw some color into the mix.  The arts demand diversity.  Do you know who this man being applauded is? 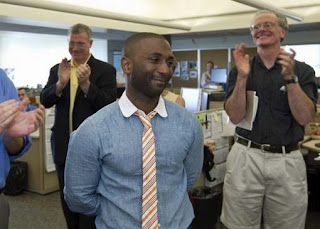 He's not as recognizable to TV viewers as Leonard Maltin, Roger Ebert or even Ben Lyons from E! Entertainment Television.  But Wesley Morris won the 2012 Pulitzer Prize for film criticism. The journalist for The Boston Globe follows Ebert as a recipient of that prestigious award.  Trust me on this, there are many many black film critics in the country who would love the opportunity to be on TV other than Black History Month.  We need to hear some black film critics give us their opinions of Django Unchained.  How did they feel hearing "n****r" onscreen over 100 times?  Is Tarantino helping or hurting?  Did he screen the film for black critics or black audiences for feedback before it was released? 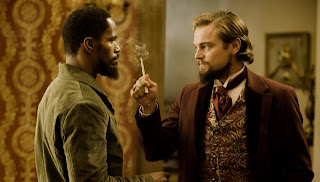 Leonardo DiCaprio is opposite Jamie Foxx in the above photo.  The slave revenge western also stars the actor who was so brilliant as the Nazi officer in Tarantino's Inglourious Basterds. 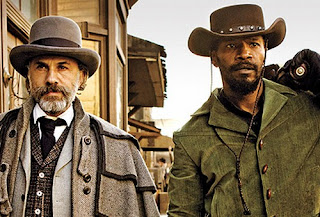 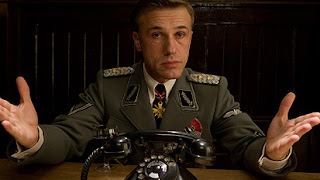 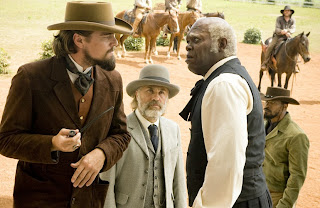 On her internationally-famous daytime talk show, Oprah predicted DiCaprio would win the Best Actor Oscar for his performance as Howard Hughes in The Aviator.  Her prediction came with the grandly dramatic proclamation, "Go get your Oscar, Leo!" when he was a guest on her show.  He lost to Jamie Foxx who amazingly channeled Ray Charles in Ray.  I have a feeling Leo will get his some Hollywood gold of his own one day.  Not to worry. 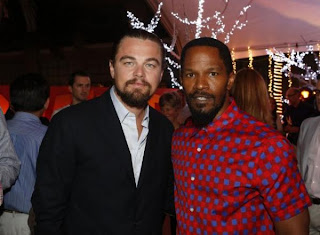 If you saw them in Django Unchained, what did you think?  What point does the director strive to make with it?  Is it socially relevant or just a wild western, Tarantino style?  Please, leave me some comments.  By the way, I respect Spike Lee, but I would not publicly condemn a film that I had not yet seen.  That wouldn't feel like fair play to me.