My love for dancer, singer, actress Ann Miller began when I was in elementary school in Southern California. I was watching EASTER PARADE on local Los Angeles television one day and saw her do the "Shakin' the Blues Away" number. I gasped and said to myself "I want to be her when I grow up." 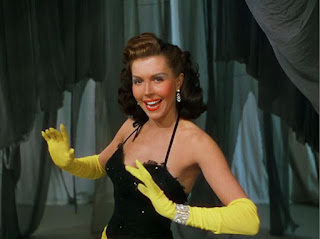 I loved seeing her as a guest on talk shows and hearing colorful stories about her from friend and former co-workers. Back in the 1980s, when I was just starting my TV career as an entertainment reporter and celebrity interviewer, I worked on the ABC affiliate in Milwaukee. I got invited to participate in movie press junkets. Movie companies would fly press people into New York City or Los Angeles to see a movie and then interview some of those involved in making the movie -- actors, the director, the screenwriters and such. On those trips, I got acquainted with a Florida entertainment news reporter named Don Stoddard. Don was married to a former Broadway chorus dancer. A cherished highlight of her dance career was being in the chorus of MAME when Ann Miller had followed Angela Lansbury in the role for that hit Broadway musical version of AUNTIE MAME.. She loved Miller and, according to what Don said, the dancers loved kooky, down-to-earth Ann right back. His wife said that Ann had little gifts for the dancers come the holiday season. Don's wife kept the card -- because Ann had signed the cards "Love, Maim."

Here's a tip on an enjoyable, juicy and revealing celebrity memoir. Recently, I finished reading RITA MORENO: A MEMOIR. 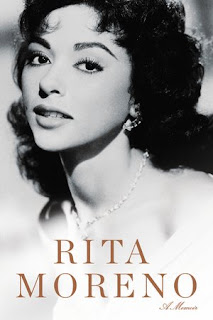 What a hoot it was to read about an experience she had in her MGM contract days with Ann Miller. Rita wrote: "No one was leggier than Ann Miller. Her legs were so long that they were the reason panty hose were invented.

Rita and Ann were assigned to do a 4-day publicity trip in Palm Beach, Florida. There in Palm Beach, both of them gussied up to represent MGM glamour, Rita wrote that they encountered "a number of rich old roosters..." Rita adored Ann and was surprised to learn that Annie could cuss like a construction worker. The pages about them bonding, dodging the "rich old roosters" on the make, and the mischief they got into  snooping around some wealthy homes reads like a cross between episodes of LAVERNE & SHIRLEY and THE GOLDEN GIRLS (when the girls were young.)

I still feel that Ann Miller's talents were under-utilized at MGM. It's rarely mentioned, but she was truly a triple threat star. She could dance, she could belt out a tune and she could act. She was a babe with a saucy personality. In the 1950s, when MGM was remaking some of it's earlier classics like THE WOMEN, THE BARRETTS OF WIMPOLE STREET and WATERLOO BRIDGE, it should've remade the 1933 Jean Harlow comedy, BOMBSHELL, as a musical starring Ann Miller as the overwhelmed Hollywood star trying to take care of her career and her freeloading, goofy relatives.

If you're up for a good celebrity memoir, remember to check out the one by Rita Moreno. Till next time, I leave you to enjoy some Ann Miller -- on tap. This is from MGM's 1953 movie, SMALL TOWN GIRL.