There's a new documentary on Netflix that focuses on the fascinating life of screen legend and fashion icon Audrey Hepburn. The documentary is entitled AUDREY. After an oddly amateurish opening, the documentary picks up polish. I read a couple of reviews by nationally known critics who wrote that we really don't learn anything new about the late actress. I don't agree. She was one of my favorite stars. There were elements of this documentary that I found revealing and surprising. In her youth overseas during World War 2, she knew poverty and hunger, her father abandoned the family and two of her relatives were killed by Nazis. She went on to become a radiant movie symbol of -- as Fred Astaire's fashion photographer character says in 1957's FUNNY FACE -- "....a girl who has character, spirit and intelligence." And I might add, elegance. 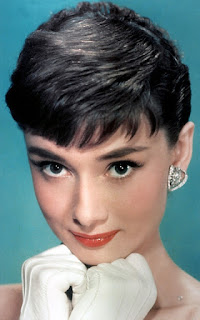 The first seven minutes of this documentary are awkward. We see a ballerina alone on a stage looking pensive. She starts to dance. We hear the voice of Audrey Hepburn telling us that ballet was her big love. She wanted to be a ballet dancer. She knew nothing about acting. We hear a voice at the Academy Awards about to announce the winner for Best Actress of 1953. The winner is Audrey Hepburn for William Wyler's ROMAN HOLIDAY. We see footage of her making her charming acceptance speech. I recognized the male voice announcing the winner as the voice of SINGIN' IN THE RAIN star Donald O'Connor. This is followed by several voices giving us flattering comments about Hepburn. I recognized one as belongin to the marvelous Molly Haskell, film critic.

Audrey Hepburn danced in FUNNY FACE and 1964's MY FAIR LADY. But no film showed us her skill as a classically trained ballerina more than the 1952 British spy thriller, SECRET PEOPLE. Had I made the documentary, I would've opened with one of Audrey Hepburn's ballet numbers in SECRET PEOPLE coupled with her voiceovers about her love of ballet. That would've been stronger than the anonymous ballerina we first see. Also, on the lower portion of the screen, I would've had graphics identifying the people off-camera who gave comments about Audrey and one identifying Donald O'Connor.

Seven minutes into the documentary, the presentation is more polished. Relatives, former Hepburn co-workers and journalists speak and screen graphics identity who they are. What I learned from the documentary was that Hepburn was working in London -- getting bit parts in films solely for the money -- and met Colette, author of GIGI. With Colette's support, Hepburn played GIGI onstage. During that time, William Wyler held a talent search in London as he sought a fresh fare to star in ROMAN HOLIDAY. Audrey Hepburn landed the lead role. This rest is movie history. One segment I found interesting was the detail on her first, long marriage to actor Mel Ferrer. Actress Leslie Caron played GIGI in the Oscar-winning Vincente Minnelli original screen musical based on Colette's work. Before that, she starred opposite Mel Ferrer in MGM's LILI. Ferrer played the stern puppeteer in that musical. We know more about Hepburn than we do about Ferrer, who was a positive engine to Hepburn's career during the early part of their marriage. They divorced. Her second marriage started off well, but he turned out to be a dog. Her third relationship -- not a marriage -- was wonderful. During that union, she embarked on her magnificent work with UNICEF.

We do get insight into how seriously she took her craft. Also, her relationship with famed designer Hubert de Givenchy displayed her gift for realizing the synergy between high fashion and film. She incorporated his work in SABRINA, FUNNY FACE and BREAKFAST AT TIFFANY'S. The latter film showed a bravery and brilliance in challenging herself as an actress. A template of Hepburn films was her finding romantic happiness and regard for her smartness and spirit in an older male. The young men were not emotionally her equals. So, in SABRINA, she fell for the older Humphrey Bogart character instead of his younger playboy brother. In FUNNY FACE, she went for Fred Astaire. LOVE IN THE AFTERNOON had her falling in love with Gary Cooper. Later, she'd bond with Rex Harrison in MY FAIR LADY and Cary Grant in CHARADE. With BREAKFAST AT TIFFANY'S, she flipped the script on that format. Truman Capote's novella, it's been noted, had Marilyn Monroe as the inspiration for Holly Golightly. The 1961 film was released two years after Monroe's big success in Billy Wilder's SOME LIKE IT HOT. The movie gives us a different Holly than the novella does. The screenplay has a warmer, more sympathetic feeling towards her. She is still that country girl who, like millions of us, headed to New York City to reinvent herself and find a new life. Holly, in the film, left a poor farm where she was known for "stealing turkey eggs" and headed in a hipster life in Manhattan wherein she took cash from older men for sexual favors. In Blake Edwards' BREAKFAST AT TIFFANYS, it's the older man who leads the young woman astray and escorts her further into a life of no substance. It's the young man, one in her own age category, who will be her salvation. That was a major switch from the previous Hepburn template. In the opening scene, looking like a high fashion model who just stepped off a Parisian runway in an Hubert de Givenchy original, she shows her attention to detail. She's alone on Fifth Avenue at daybreak, with a deli purchase of coffee in a paper cup and a pastry. With the wistful harmonica music playing "Moon River," she approached the window at Tiffany's. Notice her walk, her carriage, her style. For the country girl who once stole turkey eggs, she has put a lot of work into her reinvention. It's a studied, calculated elegance that covers loneliness.

In the last act of the documentary, the one showing much footage of her UNICEF work, I did feel there was a missed opportunity of "life imitates art." I love Audrey Hepburn's masterful performance in Fred Zinnemann's THE NUN'S STORY. The 1959 film, based on a true story, reflected some of the actress' real life. Her character was Belgian and her family was seriously affected by Nazism in World War 2. Hepburn played a woman who longs to be a nun. She's the daughter of a renowned surgeon and she is as medically brilliant as her loving father. He sees and respects her independent spirits and wonders if the strict rules of a convent are ready for her feminist independence. Sister Luke (Hepburn) burns with a desire to go to the Congo and help the poor and sick there. She gets there and improves lives. Hepburn went to Africa to do work for UNICEF. She didn't make red carpet-like celebrity appearances. She wore ordinary clothes, sat on the ground, helped and fed poor Black children. She went into huts. She utilized her stardom to help the less fortunate.
In interviews, we hear Hepburn speak frankly about her career, her marriages, miscarriage and divorces. We hear from friends and relatives how much she was loved. She made the world around her a better place. I just wish this Netflix documentary, loving as it is, had been a little more special. She deserved that. Filmmaker Helena Coan gave us this feature on the film star, fashion icon and tireless humanitarian. And now, from one of my favorite Hepburn films, here's a number from her musical with Fred Astaire, FUNNY FACE. It's the sublime "He Loves and She Loves" dance.
AUDREY on Netflix runs 1 hour 40 minutes.
at March 26, 2021