Anthony Hopkins as THE FATHER

As I watched this film, it hit me how long I've been an Anthony Hopkins fan. The first movie of his that I saw in theatrical release was the engrossing 1978 thriller called MAGIC. In that, Hopkins played a second-rate magician who flops onstage. It's suggested that he get a gimmick to save his act. He gets a dummy and puts his ventriloquist skills to use. That does the trick. The foul-mouthed dummy is a hit for the performer who secretly has mental issues. The dummy's strong personality begins to control the ventriloquist's life. The dummy orders him to commit a crime. Hopkins' performance as the demented man made me an instant fan.  The actor now plays an elderly British parent whose bouts of dementia are exhausting family members. The movie is called THE FATHER.

I read  review that said the Anthony Hopkins performance in THE FATHER is "astonishing." I agree. Now in his 80s, Hopkins delivers one of the best performances of his long film career. Hopkins gets raw in a mirth-free movie that's creatively done. He plays Anthony, a man who we see living in a nice flat in London. As the film opens, a woman walks to the building and lets herself inside. She has keys to the apartment and announces "Dad? It's me." She's his grown, married daughter Anne. Played by Olivia Colman, we'll see how Anthony's memory deterioration, his refusal to accept help, wears on her emotional state and causes her marriage to fray a bit. 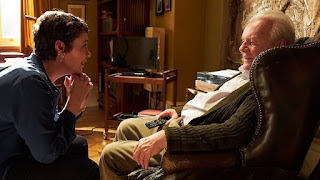 Anthony can be cordial one moment and caustic the next. He bellows "I don't need anyone" like King Lear and then he whines to his grown daughter "You're abandoning me." If you've seen Anthony Hopkins' video tweets on Twitter, you've seen how jovial and jaunty he is. That makes his physicality as a character losing his selfhood to the infirmities of old age even more impressive. Production wise, the editing by Yorgos Lamprinos is masterful. Anthony criticizes his daughter, her husband and he physically threated a caregiver. When we see shots of Anthony alone, he's surrounded by a darkness in the room. When the talks to someone, we're not sure if the interaction is really happening or if it's one of his hallucinations. But all will become clear. THE FATHER makes you appreciate your faculties, your functioning senses.
Do not be surprised if Anthony Hopkins gets a Best Actor Oscar nomination come Monday, March 15th. He's that good in THE FATHER. It was directed by France's Florian Zeller and the film is based on a play he wrote.