Back to TED LASSO

A few days ago, I blogged about the new sitcom, TED LASSO. Scroll down or log onto my March 10th "Have You Seen TED LASSO?" post and read it, if you please. Jason Sudeikis, formerly of SATURDAY NIGHT LIVE, won a Golden Globe and the Critics Choice award for Best Actor in a TV comedy. It's a fish-out-of-water sitcom. He coached college football in Kansas and accepts a job to coach a professional soccer team in London. He knows nothing about soccer, but he's got a steely enthusiasm and a shatter-proof optimism that help him as he attempts to be a good, new coach. I watched the first 3 episodes and laughed a lot. I just watched episodes #4 and #5. I laughed -- and I cried. I saw why Sudeikis won those awards. 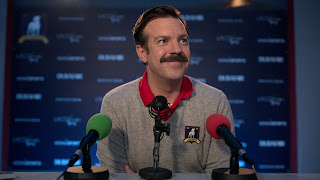 Episode #4 is about accountability. There's a posh benefit to raise funds for needy children. Popular members of the soccer team are up for auction as dates. Ted's statuesque, no-nonsense, calculating and often stern boss has to emcee. Her ex-husband, the former owner of the soccer team that she now owns as part of their divorce settlement, used to emcee and the crowd always loved him. We see a more vulnerable side of Rebecca, Ted's boss, as she prepares for the event. Rebecca is insecure about her middle-aged looks. She's insecure about how the benefit audience will accept her. 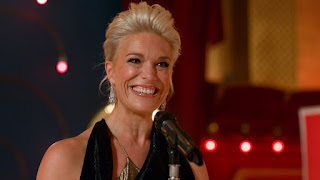 Ted, whom she pretended to like more than she really did to the press and to Ted himself, gives her strong, sincere encouragement. Encouragement is what Rebecca needs. As she's hosting the benefit, her wanker ex-husband appears and takes the stage with her. Ted gives her heart-felt support and he inspires two rival members of the soccer team, both up for auction at the benefit, to put their differences aside and truly act like teammates.

In Episode #5, we learn that Ted loves Broadway musicals. And Ted's wife and child fly to London to visit him. You can tell that they are the greatest loves in his life. His wife is glad to see him. However, there is dissonance in their marriage. They'd been seeing a marriage therapist in Kansas.  Michelle, Ted's wife, said that his "constant optimism is too much." Her unhappiness weighs on his mind as she and their little boy are in the stands watching one of Ted's televised soccer matches.

My partner died of AIDS in the spring of 1994. He was a wonderful guy. I loved him and he loved me. He changed my life. In the following years, I was romantically interested in a few fellows, but the interest was never mutual. And online dating after the age of 40 is like hitting yourself on the head with a stick. It feels so good when you stop. My willingness to love and commit again to a man were treated like an inconvenience. After a while, I took my feelings, boxed them up, put them in a little space in my heart and closed the door. I didn't lock the door. I just closed it. 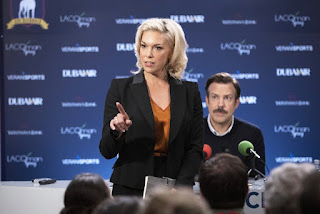 So...the final scene of Episode #5 with Ted and his wife made my cry. TED LASSO is a good series. Standouts in the solid ensemble cast are Hannah Waddingham (above) as Rebecca, Nick Mohammed as Nathan the bullied locker room attendant, Brett Goldstein as Roy, the short-tempered and hairy-chested older soccer team member and Phil Dunster as his popular young rival, Jamie. You can see the series on Apple TV/
at March 14, 2021