About DICK JOHNSON IS DEAD

If there is any current production that reaffirms what a precious thing life is and tenderly reminds us of how important it is to remind the loved ones in our lives how much they are loved, it's DICK JOHNSON IS DEAD. It's an original Netflix documentary. The documentary opens with an older gentleman playing with little kids. It's obvious that he's very special to them. He's sort of like a big kid himself. In a voiceover, we hear Kirsten Johnson, his daughter, speak. She tells us that he's "an open, accepting person." He's in his 80s, a widower, and experiencing a few memory problems. He's nearing the end of his life and Kirsten says "we're not accepting it." 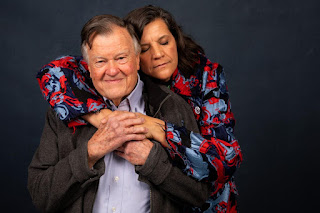 The story starts in Seattle, takes us to New York City and then to Loma Linda, California. Dick Johnson is a psychiatrist. A psychiatrist with an odd-looking set of toes on one foot. His daughter is a cameraperson. She's making a movie about his death. One scene will focus on his odd-looking set of toes on one foot. Her dad has stuntmen because we see different versions of his demise. Some are accidental. Like an air condition falling on his head while he walks down a city sidewalk. We also see his arrival into Heaven. This is a rather Monty Python-meets-GROUNDHOG DAY project and Dick Johnson is a natural, funny actor. He is an absolutely huggable and engaging person. One thing that gives this documentary such a heart and makes it watchable is the radiant love father and daughter have for each other. In Dick's movie performance, he seems to be in a state of pure glee because Heaven has a chocolate fountain. Dick loves chocolate.

The family was raised as Seventh Day Adventists. This meant no alcohol, no dancing, no movies. However, when he took little Kirsten to see Mel Brooks' YOUNG FRANKENSTEIN, she was thrilled. It changed her life. Dad lived outside of the weird confines of an organized religion. You'll like Dick Johnson. Here's a taste of the father/daughter chemistry.

A loopy elegy. While he's still alive, Dick Johnson is made aware, via a movie he's making, of how much he's loved. Finding out how much you are loved while you're still alive -- what a wonderful thing. DICK JOHNSON IS DEAD is on Netflix and runs about 90 minutes.