This is my opinion on the criticism of a Fred Astaire number in one of my favorite films, the 1936 RKO musical, SWING TIME. It's one of the brightest gems in the crown of original RKO musicals starring Fred Astaire and Ginger Rogers. SWING TIME was directed by George Stevens.

The controversial number is the "Bojangles of Harlem" number which Astaire does in blackface. I've seen a clip of this number highlighted in TV news show pieces about blackface in old films. Author and Black film historian Donald Bogle has talked about it on TCM. Currently on TCM, there's a featurette about the history of blackface in films. Again, a clip of that Astaire number is shown up front with Donald Bogle and TCM host, Jacqueline Stewart, in place to comment on it. 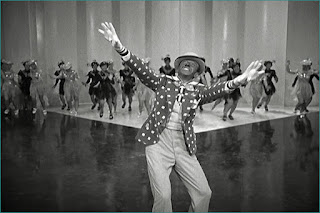 TCM now has a series called "Reframed: Classic Films in the Rearview Mirror." TCM hosts will discuss problematic aspects in some classic films. The first film was GONE WITH THE WIND. The hosts discussed the racial images. A few other films up for discussion will be BREAKFAST AT TIFFANY'S, THE SEARCHERS, MY FAIR LADY and GUESS WHO'S COMING TO DINNER. And SWING TIME.

If you read Astaire's 1959 autobiography, STEPS IN TIME, you will learn that when Astaire was a teen star on Broadway with his sister, his idol was Bill "Bojangles" Robinson. Astaire meant that number as a tribute to his idol. He met Robinson during his Broadway years. Robinson taught young Fred Astaire how to shoot pool. As for the cosmetics in the "Bojangles of Harlem" number, notice that Astaire's "blackface" is a lighter tone. It's not the coal black make-up that Al Jolson wore nor did Astaire wear a nappy wig like Jolson did. He sported his own hair. His outfit is a bit loud, but he did not design it. Eleanor Powell wore a dapper suit when she danced her salute to Bill Robinson in MGM's 1939 musical comedy, HONOLULU. In her number, Powell wore coal black make-up.

Fred Astaire did one blackface number in his long film career. After SWING TIME, he never did another. Reportedly, he never did another blackface number when he learned that many folks found blackface disrespectful. In 1959, he did the first of several multi-Emmy winning music variety specials for NBC. At a time when network TV was not exactly racially inclusive, Astaire booked Black talent to guest star on his show and danced to Black music with his partner, Barrie Chase.

Instead of rehashing Astaire's 1936 "Bojangles of Harlem" number, perhaps they could mention other blackface moments -- like the Chester Morris blackface maid bit when he played a detective in BOSTON BLACKIE'S RENDEZVOUS (1945), Eddie Cantor musical numbers in ROMAN SCANDALS (1933) and KID MILLIONS (1934), the William Holden blackface number in the first 10 minutes of 1950's FATHER IS A BACHELOR or the deluxe blackface production number in 1945's THE DOLLY SISTERS with showgirls in blackface plus stars Betty Grable and June Haver also in blackface and wearing pickaninny attire. Even Doris Day did a blackface number in 1951's I'LL SEE YOU IN MY DREAMS.

Now compare Astaire to his 1940s movie co-star Bing Crosby. Astaire did one blackface number in 1936.  In the Astaire/Crosby 1942 musical comedy, HOLIDAY INN, Crosby is in blackface as he sings Irving Berlin's "Abraham," a salute Lincoln's Day. In 1943, Crosby starred in the pre-Civil War musical, DIXIE, which put him in blackface again because the story was basically a salute to minstrel shows.

"Accentuate The Positive" is a popular, classic tune from the Johnny Mercer songbook. Crosby introduced the song in the 1944 Paramount modern-day musical comedy, HERE COME THE WAVES. Why don't we see clips of Crosby singing it? Because he sang it in blackface at a time when Black men were serving in the segregated troops of WW2. My late dad was one of those soldiers. To me, those three films with Bing Crosby blackface numbers in the 1940s eclipse Astaire's one and only blackface number in 1936.

For a far more problematic film to discuss in the TCM Reframed series, I'd select the 1945 Warner Bros. romantic drama, SARATOGA TRUNK, starring Ingrid Bergman, Gary Cooper and Flora Robson. This is a costume drama that takes place in 1875 and I saw it on TCM. Caucasian British actress, Flora Robson, played the housekeeper/narrator in 1939's WUTHERING HEIGHTS, Queen Elizabeth I in the 1940 historical adventure, THE SEA HAWK, and one of the nuns in 1946's BLACK NARCISSUS. 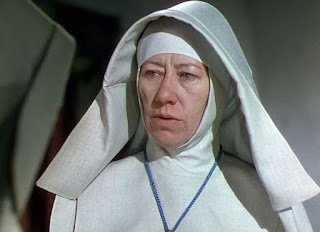 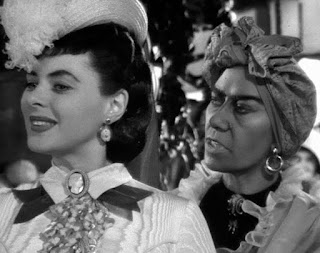 If the part was good enough to get an actress an Oscar nomination, why didn't Warner Bros. let a Black woman play that Black character?

All that is why I feel it's time to move on from singling out Astaire's one blackface number yet again for criticism/discussion. It's been done.