I've got some Broadway show tunes for you to hear. In the 1950s through the 1960s, Hollywood scooped up several Broadway musicals and adapted them into big screen movies. We saw the Rodgers & Hammerstein musicals transferred to film -- OKLAHOMA!, THE KING AND I, SOUTH PACIFIC and FLOWER DRUM SONG. We also saw THE PAJAMA GAME, DAMN YANKEES, WEST SIDE STORY, GYPSY, A FUNNY THING HAPPENED ON THE WAY TO THE FORUM, HOW TO SUCCEED IN BUSINESS WITHOUT REALLY TRYING, MY FAIR LADY, FIDDLER ON THE ROOF, OLIVER!, CABARET, BYE BYE BIRDIE, HELLO DOLLY!, FUNNY GIRL, ON A CLEAR DAY YOU CAN SEE FOREVER and SWEET CHARITY. All those Broadway musicals of the 50s and 60s were made into movies. But Hollywood turned its back on  Tony-nominated Broadway musicals that starred Black talent. 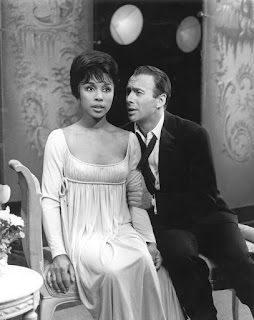 Audrey Hepburn played a new high fashion model working for a prestigious fashion magazine in the fabulous 1957 musical, FUNNY FACE, also starring Fred Astaire. The model and the magazine crew go to Paris for a special shoot. The fashions and the locations made for wonderful viewing. Diahann Carroll and Richard Kiley starred on Broadway in NO STRINGS as two Americans in Paris. The entire score of this musical came from the famed Richard Rodgers (Hammerstein had passed away). Carroll played a high fashion model who faces far less discrimination in France than she would back in the States. Kiley played an acclaimed author who's hit with a case of writer's block -- until me meets the fashion model. This 1962 production was the first Broadway musical to focus on an interracial romance. The book was done by playwright Samuel L. Taylor, the man who also wrote SABRINA FAIR. That play was turned into the Billy Wilder classic, SABRINA, starring Audrey Hepburn. For her work, Diahann Carroll became the first Black woman to win the Tony Award for Best Actress in a musical. But, with all that going for it, Hollywood wasn't interested. Here's Diahann Carroll and Richard Kiley singing "Look No Further" from NO STRINGS. For the two lead characters, friendship has grown into love.

The two characters seriously wonder if the freedom of their romance that they experience in Paris can survive if they return to America. They both realize that it couldn't. He must return to the U.S. to work. They must part. The stars introduced this song -- the most popular one from NO STRINGS.

GOLDEN BOY was a Broadway drama. The 1939 movie version starred William Holden as the prizefighter and Barbara Stanwyck as his boxing manager's girlfriend. The Golden Boy, Joe, falls for his manager's hard-shelled girlfriend, Lorna. There was a 1964 Broadway musical. It raised the stakes on the drama by making Joe a Harlem prizefighter who falls for the White Lorna. This musical starred Sammy Davis, Jr. and was directed by Arthur Penn. Penn directed the films THE MIRACLE WORKER, ALICE'S RESTAURANT and BONNIE AND CLYDE. Here's Sammy singing "Night Song" from GOLDEN BOY.

Sammy Davis, Jr. and Paula Wayne as Joe and Lorna sing "I Want To Be With You" from GOLDEN BOY. Davis was a Tony nominee for Best Actor in a Broadway musical.
Hollywood wasn't interested in that one either.
1967's HALLELUJAH, BABY made a Broadway star of Leslie Uggams. It won the Tony Award for Best Broadway musical. She won the Tony Award for Best Actress in a Musical. To tell a story of the African American struggle for equality in the 20th Century, it focuses on a young, talented and ambitious Black woman determined to overcome obstacles and make it in show business. We follow her from her girlhood during the Great Depression, through the World War 2 years, up to the beginning of the Civil Rights movement. 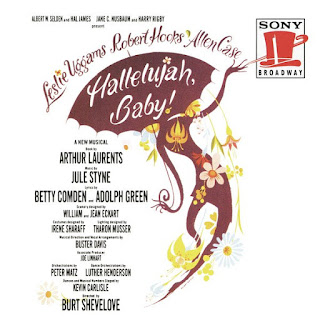 Here's Leslie Uggams on THE ED SULLIVAN SHOW singing "Being Good" from HALLELUJAH, BABY.
Hollywood ignored that Broadway musical too despite all the major talents involved. Read the cover of the original Broadway cast album above Leslie's number. Shame on Hollywood. I bet thousands of young moviegoers who loved Leslie Uggams as Blind Al in 2016's DEADPOOL don't even know she can sing.