Doris Day, like Judy Garland, truly was a triple threat film star. She could sing, she could dance and she could act. If you get TCM (cable's Turner Classic Movies), Doris Day has been the Star of the Month. This coming Monday (March 22nd), starting at 8p Eastern, you can enjoy a few of her movies. The first one up is PILLOW TALK, the 1959 romantic comedy that got her an Oscar nomination for Best Actress. Her excellent leading man is Rock Hudson. 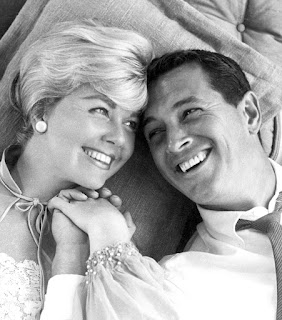 Doris was a master at screen comedy. PILLOW TALK is worth watching when you consider that Doris never took acting lessons. She had a natural talent, an actor's instinct, that awed such male co-stars as James Cagney, James Garner and Tony Randall. Cagney praised her impressive natural talents in his autobiography. I mentioned Judy Garland, a Doris Day buddy. Doris was rather like Judy Garland's Esther Blodgett character in the 1954 remake of A STAR IS BORN. Doris, like Esther who was renamed Vicki Lester, was a singer with a band. She was discovered by Hollywood figures who took a chance on the newcomer and cast her in a musical when the intended star turned out to be unavailable. Esther (Doris) makes her movie debut. She's a hit and, within five years, is one of the biggest stars at the studio. Doris Day replaced Betty Hutton in Warner Bros. 1948 release, ROMANCE ON THE HIGH SEAS. She introduced the song "It's Magic" which became a hit record and one of her signature tunes. It was an Oscar nominee for Best Song.
By the time she made the original screen musical, 1953's CALAMITY JANE, her name appeared before the title. She was a top star on the Warner Bros. lot. After LOVE ME OR LEAVE ME, the 1955 biopic drama for MGM co-starring James Cagney, a film that should've brought Doris her first Oscar nomination for Best Actress, she didn't do so much dancing in her movies -- but dance she could. Here she is with Gene Nelson in the Warner Bros. 1950 musical, TEA FOR TWO.

In the 1955 movie, LOVE ME OR LEAVE ME, Doris flipped the script on her sunny, ambitious All-American Girl image and played the dark side of it. As real-life singer Ruth Etting, she becomes a hit with the help of her hoodlum/manager husband played by James Cagney. This film brought Cagney a Best Actor Oscar nomination. It should've brought Doris her first Best Actress Oscar nomination.

One of my favorite Doris Day films during her Warner Bros. years is 1954's drama with music, YOUNG AT HEART. Doris stars opposite Frank Sinatra who plays a hard luck singer/songwriter. His luck will change as he falls in love with Doris' character. Here, you have two former band singers who became movie stars and eventually got Oscar nominations. I love this closing number Doris Day and Frank Sinatra have in YOUNG AT HEART.

Besides being a top ten box office star, Doris Day also had hit records. Two of her hit records were tunes she sang to Best Song Oscar wins -- "Secret Love" from CALAMITY JANE and "Que Sara. Sara" (Whatever Will Be, Will Be)" from THE MAN WHO KNEW TOO MUCH. I totally dig the jazz album she cut with Andre Previn. Here's a taste.