My Time with Spalding Gray

"I'm rather a chaos person." That he was. Spalding Gray was a most brave, bold and influential monologist who started on the New York City downtown scene, motivated and helped by the Wooster Group. He talked about loved ones, agents, therapists, medical workers, his father, his mother's suicide, his heterosexual sex life and a same-sex encounter. Oh, yes. He also talked about himself. When I saw him in 1987's SWIMMING TO CAMBODIA, his one-man show that was filmed, I felt my skin and soul tingle. His observations were personal yet so very universal. To me, Spalding Gray was a brilliant monologist. Probably one of the best since Ruth Draper. Certainly one of the most celebrated. From monologist, he transferred over to acting. 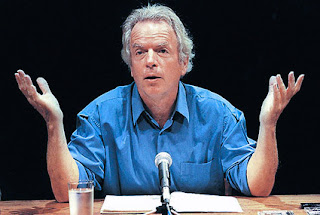 Today, I saw myself with Spalding Gray on the Criterion Channel.

Back in 2009, I'd been hit hard by the Recession. From 2006 to 2008, I worked with Whoopi Goldberg on her national live weekday morning show out of New York City. I was fulltime and my pay was $44,000. My longtime TV & Radio commercial agent had passed away. She was a great agent and a great friend. She kept me busy with side gigs -- commercials, many of which aired in other parts of the country. I'd get off the air from Whoopi's show and doggedly hunt for a new agent to represent me and get me auditions for employment. However, despite my years of national work, agents turned me down saying "I wouldn't know what to do with you."

I needed work. In Manhattan, $44,000 was not a sufficient income in a city with escalating rents. One day, I returned to my modest studio apartment to a message on my answering machine. A female voice said, "Hello, Bobby Rivers, I'm Amy Hobby calling from Steven Soderbergh's office. We'd like permission to use a clip of some of your work in a documentary we're doing." Of course, I tried to figure out which one of my friends was pranking me. None was. When I returned her phone call, I was told that Soderbergh was doing a documentary about the late Spalding Gray. Gray had been a wonderful guest on my late 1980s VH1 talk show. Soderbergh wanted to use a long clip from our interview. A VHS copy of my show with our interview was in Gray's personal belongings.

I was honored to be asked and touched that Gray had a copy of our show in his belongings. The documentary has no voiceovers, no narrator. It's clips of his work over the years, some home movie footage and TV interview clips from E!, MTV, CBS and The Charlie Rose Show -- and from VH1. We see him young, years before a serious car accident in Ireland, and we see him older after the accident. After his reported 2004 suicide, it was revealed that the car accident left him with slight brain damage, Here's a trailer for the documentary, AND EVERYTHING IS GOING FINE.

I never had a chance to see Soderbergh's 2010 feature until today.

AND EVERYTHING IS GOING FINE. You'll see Spalding and me about 50 minutes into the feature. It's available now on the Criterion Channel.