An L.A. Story from Ava DuVernay

I grew up in South Central Los Angeles -- on East 124th St. and Central Avenue. Compton was near our block and many of our best Rivers Family entertainment nights were spent seeing a double feature at the Compton Drive-In. When I was in middle school -- we called it junior high school then -- our family was in the curfew area during the Watts Riots of 1965. A few years later, when I was attending Verbum Dei High School in Watts, I made my first appearance on television. I was the youngest, at that time, contestant on a classic film trivia quiz show called THE MOVIE GAME. It was shot in Hollywood, hosted by Sonny Fox, there were celebrity teammates and the show was syndicated. My mom drove me to the studio and she sat in the audience for the taping. She watched me win. I loved growing up in South Central L.A. I have visited but have not lived in L.A. for a long time now. Seeing a new 13-minute documentary from executive producer Ava DuVernay was like a sweet trip back home. This short feature is a current Oscar nominee. It's entitled A CONCERTO IS A CONVERSATION.

The documentary opens by taking us to the Walt Disney Concert Hall in Los Angeles. We meet young, handsome African American composer, Kris Bowers. His work can be heard in the film THE UNITED STATES vs. BILLIE HOLIDAY and the hugely power Netflix series, BRIDGERTON. His work was also heard in the Best Picture Oscar winner, GREEN BOOK (2018). Kris wonders if he's supposed to be there at the concert hall because the building emits a vibe of having been designed and built for greatness. Kris' grandfather says "You wouldn't be there if you wasn't supposed to be there." That is the beginning of a truly heartwarming conversation in a living room with Kris, at a piano, and his grandfather. Horace is 91. 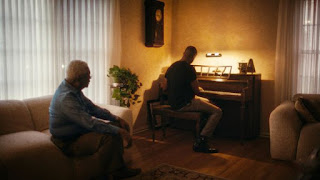 Kris' grandfather grew up in Florida. There were 13 members of the family in a 2-room home. When Horace was young and saw a grown Black man have to call a boy "Sir" because that was the oppressive racial atmosphere of the time, he was determined to leave Florida one day and settle someplace else. That someplace was Los Angeles. 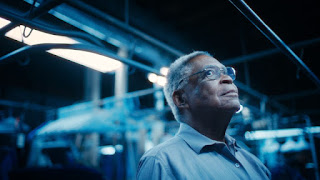 Not that Los Angeles was/is racism free. Let's just say that. in L.A., it's more passive aggressive than in Southern cities. When I won on the game show, we had to go to a store on Olympic Blvd to pick up one of my prizes. Olympic Blvd turned out to be a life-changing street for Kris' grandfather. He got a job working in a cleaners on Olympic Blvd and that was the beginning of a success story. He met a lovely lady and got married. Family followed. Kris' parents wanted him to be interested in the arts. He was. He took to playing piano in his boyhood. He even played piano at a Marie Callender's eatery in L.A. I new Marie Callender's had pies. I never knew it had a piano.

Kris seemed to yearn to see representations of himself in the arts scene. I understand that feeling. The main reasons I pushed to be a contestant on that game show were not for prizes. I wanted to show my parents that I was serious in my passion for film. Also, I wanted to show that Black people knew things about classic films. My parents did. So did our neighbors on the block and my teachers at school. In my boyhood, local TV rarely -- if ever -- covered the arts scene in the Black community before the Watts Riots. And you rarely saw a Black person anchor the local news on a network affiliate. If I couldn't be in the movies like Sidney Poitier, Harry Belafonte or Ossie Davis, then I would review them and interview actors and filmmakers on TV. Which I did in New York City.

Kris Bowers' bonding with his grandfather over music is a sweet composition of Black History and one family's loving success stories from the Jim Crow South to the Walt Disney Concert Hall. The short documentary was directed by Kris Bowers and Ben Proudfoot. 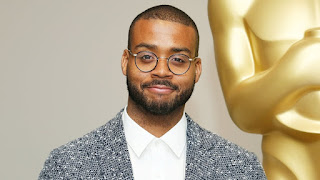 This documentary is shot with generous tight close-ups of the grandfather and Kris Bowers (above pic). The camera loves Kris' face. If I had dreamy brown eyes like his, I'd surely be romantically attached. A CONCERTO IS A CONVERSATION is now streaming on NYTIMES.com.