I felt like doing a blogpost on two fascinating show biz figures -- Josephine Baker and Lena Horne. Both were extraordinary entertainers. Both were Civil Rights activists. Baker grew up in St. Louis, Missouri. She married young and divorced young. She performed in vaudeville and eventually made it to New York. At age 19, she decided to sail to Paris where she would not be blocked by discrimination like Black people were in America. Nearly nude, this American in Paris become a show biz icon by dancing on stage with a strings of bananas around her waist as a costume. This was during the Jazz Age, the 1920s. Author Ernest Hemingway called her "the most sensational woman anyone ever saw." She was gorgeous and glamorous. Unlike in America, she could sit in any Parisian restaurant and be served. She didn't just danced. She sang too. She learned the language and sang in French. Her celebrated revue performances on stage, her stardom, led to French film work. 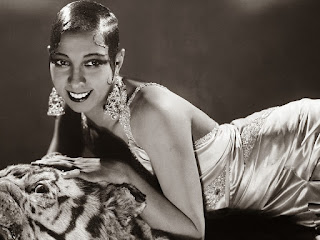 In France, she became a movie star. In the 1930s, when Hollywood limited Black actresses to playing maids or mammies, Josephine Baker was given star treatment in French films. Here's a clip from her 1935 French film entitled PRINCESS TAM TAM. Look at this number and compare it to the 1940s musical numbers Lena Horne did in MGM movies. Also gorgeous and glamorous, Horne was given the deluxe treatment in her musical numbers, but she was never incorporated into the action with her fellow A-list MGM talents who were White. Lena never got to do dialogue and a scene with Gene Kelly, Frank Sinatra, Fred Astaire, Judy Garland or Kathryn Grayson. They may have all been in the same movie, but Lena was separated from them. That was Hollywood in the 1940s. Josephine Baker could interact with the White actors in a way Lena Horne was not allowed to. Here's Baker in PRINCESS TAM TAM in the 1930s.
In 1934's ZOU ZOU, Josephine Baker sang "Haiti" which became one of her hit records.
Hollywood never extended an opportunity for the American in Paris to return home and do a guest number in one of its all-star 1940s musicals. Here's trailblazer Lena Horne in the 1948 all-star musical, WORDS AND MUSIC. It starred Mickey Rooney, Judy Garland, June Allyson, Gene Kelly, Janet Leigh and Tom Drake. Lena Horne was not seen in a scene with any one of them. Nonetheless, she was a highlight of the film singing "The Lady Is A Tramp."
Think about that the next time you see a 1940s MGM musical featuring Lena Horne. Both Lena Horne and Josephine Baker were present at Dr. Martin Luther King's 1963 March on Washington.
Actress Ruth Negga, a Best Actress Oscar nominee for 2016's biopic, LOVING, is slated to star as Josephine Baker in an ABC TV production. 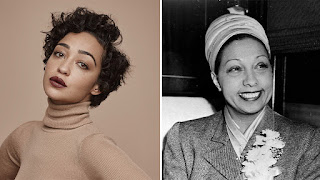