My Moment with Paul McCartney

It was one of the most exciting experiences of my TV career. There I was, a guy who grew up in South Central Los Angeles, on a plane flying to London where I would interview the legendary Paul McCartney. This was when I was an employee of MTV Networks. I worked on VH1, sort of the older sibling to MTV. MTV still gets attention. VH1 is like the overlooked child. But it was and is under the same Viacom/Paramount/CBS corporate umbrella as MTV. I absolutely loved working for VH1 as a veejay and celebrity talk show host. I worked on VH1 from 1987 to 1990, three of the happiest years of my life. Paul McCartney was promoting a new album he'd recorded with Elvis Costello. My interview would be a one-hour special to air on VH1. Of course, one of my goals was to get something from the famous former member of The Beatles that we had not previously heard. 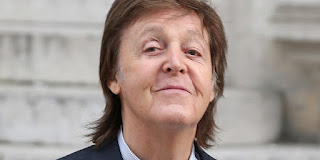 Here's one of my favorite bits from the interview. My goal was accomplished.

On March 4th in 1968, Franco Zeffirelli's ROMEO AND JULIET had a Royal premiere in London attended by Queen Elizabeth II and international stars. The Paramount release was huge hit here in the States. Even the soundtrack was a top seller. Here's a clip from the film that could've starred Paul McCartney -- in tights. The stars are Leonard Whiting and Olivia Hussey.

At that interview moment with Paul McCartney, I thought of my high school -- Verbum Dei High School in the Watts sections of South Central L.A. The all-boys Catholic high school is still in operation. Our teachers didn't have the big fine arts budget that schools in the then-predominantly white areas did. So our teachers took advantage of special school discount group rate tickets to screenings of new, prestigious films in Hollywood. Those films could help us with our studies. We got on buses for field trips to Hollywood to see ROMEO AND JULIET, A MAN FOR ALL SEASONS, FAR FROM THE MADDING CROWD and the long, brilliant late 1960s epic foreign film adaptation of WAR AND PEACE directed by cast member Sergei Bondarchuk. Yes, those were films seen by African American and Mexican American teen boys from a high school in Watts. I am still grateful to those teachers for using classic films as educational tools. They did help me in my English Lit. classes. They also helped me in my TV career as an interviewer.

About McCartney: I was working with a British TV crew. A terrific crew. Being that Paul McCartney is an international star, we were all prepared to tape as soon as he arrived and expected him to be late because he surely had a packed schedule. Well, we were all pleasantly surprised. Paul McCartney showed up early, alone -- without entourage or publicist -- and was extremely gracious and charming and thanked all of us on the crew. A lovely man.