Regina King is a queen in the film industry. That is my opinion as a loyal follower. I first really noticed her in the John Singleton movies, starting with 1991's BOYZ N THE HOOD. Regina King was just like the women on my block in South Central Los Angeles and girls who were my classmates. She was that real in her performances. Then came the 1996 hit, JERRY MAGUIRE. She was a dramatic standout as one of Ray Charles' women in 2004 RAY starring Jamie Foxx. Her turn as the matchmaking best friend in 2007's comedy/drama YEAR OF THE DOG was a delight. Regina King was sensational in the under-promoted, under-appreciated NBC series, SOUTHLAND, about L.A.P.D. members. She played the whip-smart and respected Detective Lydia Adams in that 2009 series. If you can find episodes of that series online, I highly recommend you watch them. Det. Lydia works hard to balance her career with being a good, attentive daughter as she lives with her aging mother. Then came the rich role of Sharon Rivers in the Barry Jenkins' adaptation of James Baldwin's IF BEALE STREET COULD TALK. I jumped for joy when her performance brought her the Oscar for Best Supporting Actress of 2018. 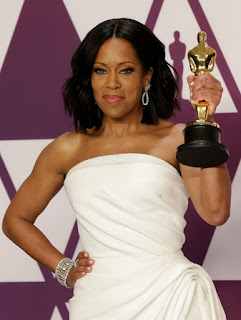 Regina King has made her directorial feature film debut with ONE NIGHT IN MIAMI. It's directed with such skill, style, intelligence and confidence that you'd never guess it marks her first time in the director's chair for a feature film. The story is the fictional tale of the night four formidable and famous Black men get together to discuss their roles and responsibilities in the Civil Rights movement of the 1960s. 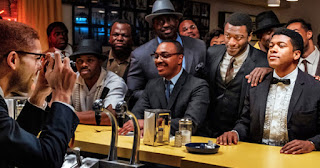 This is a dialogue-driven film that pops with energy, tension and relevance. You have to see the performances director Regina King drew from the four male lead actors. Leslie Odom Jr., a graduate of Broadway's original HAMILTON cast, is ripe for a Best Supporting Actor Oscar nomination for his work as the outspoken and reluctant singer Sam Cooke. Kingsley Ben-Adir plays Malcolm X. Malcolm will constantly challenge Cooke who seems reluctant to go vocal on the need for Civil Rights. The actor plays Malcolm X with a subtle steeliness and a sense that he knows he won't live to be an old man. Ironically, both Malcolm X and singer Sam Cooke were shot to death. Aldis Hodge is very strong as NFL star Jim Brown. The opening scene shows that even celebrated Black professional sports greats are not free from blunt racism. Eli Goree plays the young, loud and proud boxer Cassius Clay on the brink of transforming into Muhammad Ali. Here's a trailer.
Brava to Regina King. She did a wonderful job. Look for ONE NIGHT IN MIAMI to stream on Amazon Prime come January 15th.