On SET FIRE TO THE STARS

If I used an elevator pitch style to recommend this story of two writers as a DVD rental, I'd say "It's like MY FAVORITE YEAR meets SIDEWAYS only it's a drama based on a real-life story about a famous writer and photographed in black and white." The 2014 release is SET FIRE TO THE STARS. The known Hollywood star in it is Elijah Wood and he's the reason why I watched it the first time. I wanted to review it on a film review show that aired on national cable TV at the time. I suppose that THE LORD OF THE RINGS and all its sequel/prequel adventures featuring Elijah Wood as Frodo contain his most famous film role. I'm a big Wood fan in and outside of THE LORD OF THE RINGS. I love his willingness occasionally to seek out roles in productions that may not be mass market movie hits that sell lots of popcorn at the concession stands like those fantasy adventures did. They may not attract millions of viewers, but those roles challenge him as an actor.  EVERYTHING IS ILLUMINATED is an example. That film had him as the young Jewish guy out to find the woman who saved his grandfather. His grandfather was in a Ukrainian village during World War 2, a village overtaken by Nazis. I loved Wood in the American version of the Australian TV series, WILFRED. In that, he played a lovable yet depressed guy who, for reasons unexplained, sees his neighbor's dog as a grown man in a dog suit -- and they talk to each other. The dog is randy and rude but exactly what the young man needs to shake him out of his depression. SET FIRE TO THE STARS has what's been added to the list of my favorite Elijah Wood performances.  "How much trouble can one poet be?" The man Wood plays in this drama will learn the answer to his question when he becomes chaperone, wrangler and guardian to the hard-drinking Dylan Thomas during a speaking engagement in New York and Connecticut. 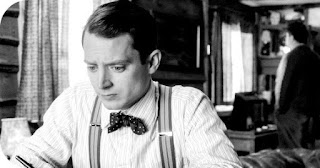 We go back in time to New York City in 1950. Elijah Wood plays the nervous aspiring poet John M. Brinnin. He's a Harvard graduate who bring in his idol, Dylan Thomas, for a week-long speaking engagement. Says Brinnin about the Welsh poet, "I believe him to be the purest lyrical poet in the English speaking world." But after Thomas hits a Manhattan apartment party like a hyper sheepdog in a fine china shop, Brinnin realizes he's got some heavy duty on his hands as a week-long caretaker to the famous poet. Brinnin chats with Thomas and tells him he needs to behave in his hotel room. He tells Thomas this as the poet relaxes in a bathtub with water up to his chest. Dylan Thomas was in the bathtub fully-dressed as Brinnin spoke to him. 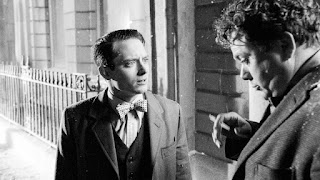 See what I mean about a similarity to MY FAVORITE YEAR? In that film, a young comedy writer works on a network TV comedy show in the 1950s. His movie idol, the boozing and charming ladies' man/ageing action movie hero, is booked on the show and he's the young writer's responsibility. The actor is still charismatic, still unreliable. But the two men have a need for each other in a certain situation. In SIDEWAYS, two grown male friends appreciate good wines and a road trip as one's wedding approaches. There will be a disruption and the two men will need each other in a certain situation. 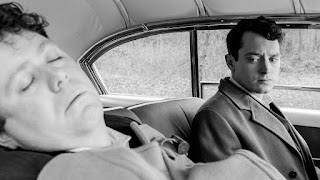 In SET FIRE TO THE STARS, Dylan Thomas is portrayed by the attractive, talented and burly actor, Celyn Jones (pronounced Kellin). He co-wrote the screenplay with first time director, Andy Goddard. The movie was shot in 18 days. When it was released in 2014, I watched it twice in the same weekend because of the magnetism between the two male leads. It's as if they artistically fell in love with each other and used that emotion to inform their performances. The aspiring poet, taxed by trying to keep Dylan Thomas from drinking and wrecking things, is attached to him because he wants to learn the secret to his gift. There's a rowboat scene in which hellraiser Thomas challenges boyish Brinnin and blurts "It's about feeling something." Celyn Jones shows us the lyrical poet in the man, the vulgar side that erupts when confronted with pomposity and the heartbroken, vulnerable, irresponsible man-child who cries out "I'm a drunk!" 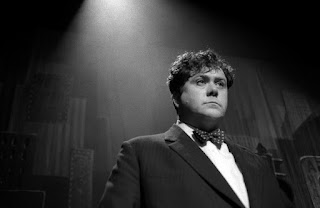 The movie has a 1950s jazz score. The black and white cinematography is perfect for this story and its look at a bygone New York City. There's a minimal richness to the art direction and the set decoration. The look of the set and the looks of the character actors as diners are perfect. This was a praiseworthy accomplishment. Not only was SET FIRE TO THE STARS shot in just 18 days, it was shot entirely overseas in Wales. Celyn Jones is a native of Wales in the United Kingdom. Wood had been in Wales shooting a previous project when he got the SET FIRE TO THE STARS script. 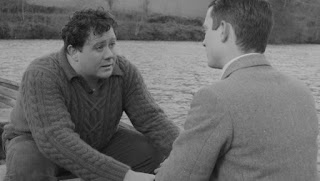 When this film opened in New York City, I think it played at one arthouse theater in the Greenwich Village section. Elijah Wood was a guest on THE VIEW around that time but the ladies didn't mention SET FIRE TO THE STARS at all. They mentioned another project of his. I do believe that, if the film had received more attention from entertainment reporters and movie-goers, actor Celyn Jones would've received Hollywood script offers. He's quite good. I'd love to see more of him. Had he been around back in the day, Celyn Jones would've been working with classic film directors such as David Lean, William Wyler and Fred Zinnemann. I'd pitch him for one of those big budget adventures from Steven Spielberg or Patty Jenkins so he gets introduced to a large nationwide audience.
There's a dinner party scene in SET FIRE TO THE STARS that borders on the Edward Albee-ish. Think WHO'S AFRAID OF VIRGINIA WOOLF? The actress seen as the wife, Shirley, is Shirley Henderson. She scored in another film based on the true events in the lives of real people. It too is a fine film. In 2018's STAN & OLLIE, we see Steve Coogan and John C. Reilly as the latter-day Stan Laurel and Oliver Hardy. Their loving wives, who constantly bicker with each other, are practically a comedy team themselves in the movie with their verbal tennis match of zingers. Shirley Henderson was a hoot as Mrs. Oliver Hardy.

SET FIRE TO THE STARS is a 95-minute biographical drama and a directorial debut that has some good things going for it. I watched it over the weekend and loved it for a third time. You can rent it on YouTube and Amazon Prime. 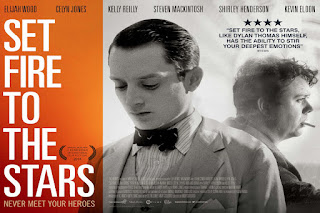