Those Who Left Us

We have reached that time of the year where we see In Memoriam shows and video features appearing on television.  TCM (Turner Classic Movies) has a poignant video, beautifully done, that is now airing.  It's a montage of film and film-related artists who passed away this year.  The touchstone TCM host, Robert Osborne is shown at the end of the video.  He left us too.  In the TCM package, I see people whose work not only moved me, entertained me and enlightened me, I see a few artists with whom I had personal contact.  They were celebrities I interviewed on TV.  In the case of Mary Tyler Moore, I not only interviewed her, I chatted with her on the phone a few times during my VH1 years.  In fact, when new management came in and took over VH1. it decided not to renew my 5-year contract at the end of its 3rd year.  So, I started seeking a new job while in the final months of that VH1 job I loved so much -- especially when the old management was in place.  I had no idea that I would be eligible for unemployment until Mary Tyler Moore told me so over the phone.  She'd heard from her production partner, a buddy of mine, that new management wasn't renewing any VH1 talent. Imagine that.  I learned that I could apply for unemployment in my TV career from "Mary Richards" herself when I returned a call to her production partner and she answered the phone. 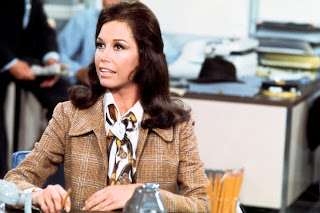 The TCM feature has three actors who were fabulous and memorable guests on my VH1 talk show -- the hysterically funny, wise and mothering Debbie Reynolds, the warm and chatty Martin Landau and the charming and huggable Adam West.  We taped the Adam West interview in L.A.  Earlier that day, we'd interviewed his former BATMAN co-star, Burt "Robin" Ward in his Century City office.  The most heartwarming element of that taping day was the discovering that, after all those years, those two former TV co-stars were essentially a couple for old working class buddies who'd kept in touch and loved being in each other's world. 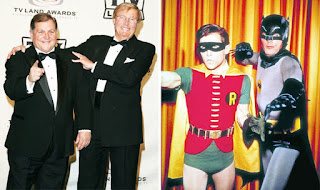 Robin Roberts presents her network special looking back at those who left us.  It airs tonight on ABC.  Her special, like the TCM video package, will show the late Glen Campbell. 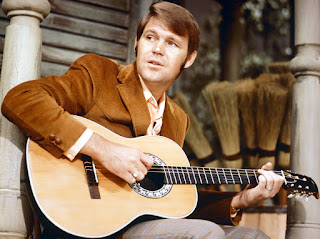 Ten of the happiest days of my life in 2006 were spent in Chicago.  I had host work for every day of the Windy City's "Tastes of Chicago" festival that, back then, started in late June and went through the 4th of July.  The weather was great and so were the people sharing the booth with me.  I loved that gig.  I had booked it because I still had some popularity as a Food Network show host.  While at the Chicago event, I was asked if I would introduced the musical guest at one of the event's other stages.  I was asked because the representative remembered my VH1 work and so would members of the audience. He said that the crowd would be mostly baby boomers, and he was positive I would know something about the artist and wouldn't need a lot of biographical info.

He was right.  The artist was singer/musician Glen Campbell.

I'm not what you'd call a typical country music fan, but there are quite a few country recordings and stars that thrill me going back to classics by Patsy Cline and Hank Williams to Garth Brooks.  I believe that Dolly Parton is one of the most brilliant songwriters alive today and her work has earned its place in the Great American Songbook.

Glen Campbell singing and playing "Wichita Lineman" is a work of art in my book.  "Gentle On My Mind" and "Rhinestone Cowboy" by Glen Campbell were also cuts I loved.  And, yes, I watched his CBS variety show just about every Sunday night it was on when I was a kid.

I did not get to meet Glen Campbell backstage.  But, for a brief moment, he stood next to me as he took his place at the microphone onstage.  I stood a few feet away and watched his act.  Wow.

He walked out with a look of total focus and concentration as he made his way to the microphone, his guitar strapped around him.  I'd given him an enthusiastic intro and the crowd was a joy.  We baby boomers gave him a loud, cheerful welcome.

He warmly greeted the crowd and launched right into his signature tunes.  There was no laziness about his vocals.  He performed all his old hits as if they were making a debut on a new album of his.  And his voice was rich.  He sounded so good, so much like he did on his old CBS show.  This was 2006.

On Netflix this year, I watched GLEN CAMPBELL...I'LL BE ME.  This 2014 documentary shows the entertainer being tested for and diagnosed with Alzheimer's disease.  He begins a farewell tour in the documentary.  Honestly, some parts were tough to watch.  You see him almost in a carefree state when he's being tested and we see that his memory has started to crack. Later, we see moments when he's mean and irritable with loved ones because the disease's destruction has spread within him.  The documentary is moving yet also jarring.

I am so lucky I had that sunny Chicago afternoon experience of seeing him perform in person before illness struck.  What a performer.  And I'm lucky I had that VH1 talk show.  Here's to all those who left us with great memories -- and great art.
at December 18, 2017