I've interviewed actor Michael Shannon a couple of times -- the two videos are posted on my YouTube page -- and, man, I sincerely hope I have the opportunity to talk to him again.  He's an absolutely fascinating, no-frills guy.  There's a lot of wit and wonder going on inside his head.  I love talking to actors who have something to say, actors who become something special in their profession yet never lost that sense of common clay that they came from when they started their career journey.  Michael Shannon plays a flat-out frightening racist who quotes the Bible in THE SHAPE OF WATER.  He's in a position of power for a government operation.

In Shannon's performance, he shows quick glimpses into the tainted soul of the character.  We see that this man could change, he could turn his soul towards the light if he chose to. 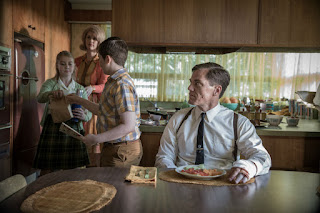 On Christmas Eve, Michael Shannon made me to a loud snort laugh as a good-hearted but slightly clueless small town shopkeeper named Maynard.  If you're up for a quirky comedy that runs only about 90 minutes long, has a Christmastime feel and a spirited cast, check out the Michael Shannon comedy film on Netflix.  It's called POTTERSVILLE.  Yes, just like the town of George Bailey's Twilight Zone-like experience in Frank Capra's IT'S A WONDERFUL LIFE.

POTTERSVILLE is in color, with very appealing production design and a steady tone of humor that is often outrageous but doesn't go too over the top wacky and take away from the message of the piece. POTTERSVILLE is ultimately about giving people hope.  It's the kind of project that, back in the early 90s, would have been a Hollywood studio release starring Bill Murray.

A rural town, Pottersville, was hit with Recession Era layoffs.  Folks are recovering but just getting by.  They may run short of cash making purchases or may be a little late paying a bill.  Maynard understands.  He's got a good heart.  But a relationship takes a sudden and unexpected disappointing turn.  To recover, he gets a little drunk, puts on a gorilla costume and romps through the woods one night. 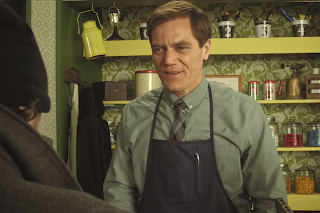 Well...somehow, he's sighted and mistaken for the mysterious and legendary Bigfoot.  Before you know it, the sighting has made news and a popular reality show host comes to town to get footage of Bigfoot in the woods for a major TV special.

Maynard has been such a good friend and neighbor that he's sort of blended into the background.  Residents have gotten used to his kindness and friendliness.  They've forgotten how helpful he's been in their lives.  Will they turn on him when it's discovered that he's really Bigfoot? 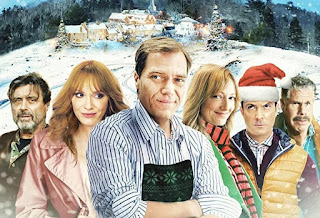 I was really in the mood for something off-beat, harmless and short like this.  POTTERSVILLE left me with a smile on my face.  The cast includes Ron Perlman, Christina Hendricks (formerly of MAD MEN), Thomas Lennon (formerly of RENO 911!) and Ian McShane.  McShane is the town macho hard drinker who uses the Bigfoot hunt to become like Quint, the Robert Shaw character in JAWS.  Michael Shannon has two Oscar nominations to his credit for performances in dramas -- REVOLUTIONARY ROAD (2009) and NOCTURNAL ANIMALS (2017).

POTTERSVILLE may not be a great Christmas classic like IT'S A WONDERFUL LIFE or MIRACLE ON 34th STREET, THE BISHOP'S WIFE, WHITE CHRISTMAS or even A CHARLIE BROWN CHRISTMAS, but -- unlike DIE HARD -- no one gets killed, there's no gunfire, nothing gets blown up and the language is pretty clean.  Also, it's good to be reminded that Michael Shannon is versatile and can also do comedy.
at December 27, 2017