You heard her silky voice sing at the open of Scorcese's 1974 film, ALICE DOESN'T LIVE HERE ANYMORE.  You hear the silky voice of the 20th Century Fox musical star, Alice Faye, again in a new film.  I just saw Guillermo del Toro's sci-fi fantasy thriller, THE SHAPE OF WATER.  I'll talk about this film, for sure, in a podcast episode with my pal, Keith Price.  I will tell you right here and now that I will not be surprised if there are Oscar nominations for actress Sally Hawkins and Octavia Spencer.  What outstanding performances they give!  I am such a fan of del Toro productions and this new one did not disappoint. 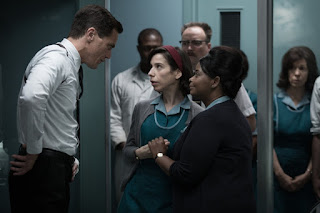 Such imagination. Such creativity. Such surprise. Such a beautiful alien creature. 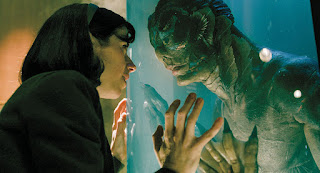 Here's a trailer for the movie.  Michael Shannon and Richard Jenkins also star in it.
Classic film fans may find it pretty cool to learn that a 1943 Fox musical in Technicolor contributes a very important item to THE SHAPE OF WATER.  The musical is HELLO, FRISCO, HELLO and it starred Alice Faye. 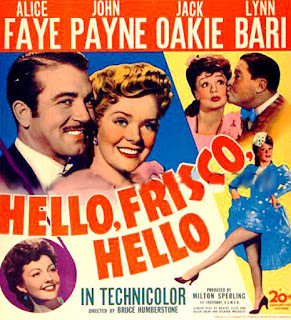 In that musical, she introduced the song "You'll Never Know."  She was one of Fox's top blonde musical stars of the 1930s and into the 1940s.  HELLO, FRISCO, HELLO came out during World War 2 and was a big hit with audiences.  "You'll Never Know" won the Oscar for Best Song and became one of the singer's signature tunes. 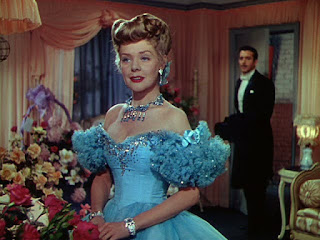 That song is important in THE SHAPE OF WATER.  I'll explain, delve into the social relevance of this stunning sea creature sci-fi movie and tell you a little story about the lovely time I hung out with Alice Faye when I was new to New York City.  All that's coming up on a future podcast. 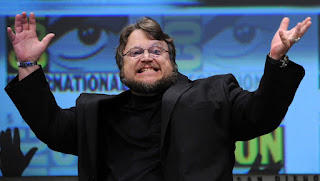 I would to interview "The Scare Bear" (my nickname for THE SHAPE OF WATER and PAN'S LABYRINTH director Guillermo del Toro) about his script and the choice of movie musical clips in THE SHAPE OF WATER.  In the tale of the supernatural amphibian sea creature from South American, now in U.S. government custody, we see clips of classic Fox musicals starring Shirley Temple and Betty Grable. Like Alice Faye, they were also top stars at Fox.  THE SHAPE OF WATER is a Fox Searchlight film.  Did del Toro have a deal to direct/produce a new film for Fox?  Warner Brothers has classic MGM musicals in its library.  If he had made this film for Warner Bros. release, would they have paid to use those Fox clips or would he have had to switch to movie musical clips of MGM stars such as Judy Garland, Gene Kelly and Esther Williams?  The old songs from movies are critical to revealing the sea creature's impact and powers.

You know what might be a good film to watch before you go see THE SHAPE OF WATER if you don't plan to head out to the movie theater right away?  GODS AND MONSTERS, the 1998 biopic that brought a Best Actor Oscar nomination to Ian McKellen.  McKellen played James Whale, the British director in Hollywood who made revolutionary, popular box office movies yet had to recover from hitting a wall of Hollywood homophobia.  He directed FRANKENSTEIN and BRIDE OF FRANKENSTEIN, two monster movies that changed the look and production game of monster movie-making.  The director was openly gay at a time when Hollywood may have seemed liberal but was really quite conservative.  At that time, it preferred its people to stay in the closet.

Director/co-writer Guillermo del Toro told writer Chris Azzopardi in the December 17th post on www.intomore.com that he based the gay character that Richard Jenkins plays in THE SHAPE OF WATER on the late horror film director, James Whale.

I'll talk more about that in the podcast too.  In the meantime, please check out and *like* current episodes of our podcast at www.MOCHAA.podomatic.com.