Billy on the Bus

Lord, have mercy! This news of Billy Bush vs. Trump and Matt Lauer's TV career experiencing G-force from its rapid descent is stuff even the late Jackie Collins could not have dreamed up for fictional broadcast characters in one of her racy novels.  Yes, I was shocked to read the graphic reports of Lauer's alleged sexual misconduct.  I was also stunned to read that he lives on a $33 million estate in the Hamptons and owns a $30 million estate in New Zealand.  One man.  I thought of all the 30 Rock NBC news workers in the past, the little people behind the scenes, who made way, way, way less money but were the first to be laid off when the company had to "tighten its belt."  As I've said on my podcast with Keith Price, I used to work on-air with Matt Lauer in 1992 on local WNBC News.  This was before his TODAY Show stardom. But you could tell that his star was definitely on the ascendant.  I worked part-time.  My salary was...well, nothing to brag about even though I was on one of the top stations in the city and I had years of national TV credits.  More about that later.  Billy Bush wrote (with help, I'm sure) an opinion piece that got printed in THE NEW YORK TIMES.  Trump, in a totally Trump-like move, has recently suggested that he really didn't say those sexually offensive things about women -- even though he apologized for them when the tape was leaked.  Billy Bush broke the news that, yes, Trump really did say those things.  Trump, in his THE APPRENTICE host days on NBC in 2005, was on an ACCESS HOLLYWOOD bus with ACCESS HOLLYWOOD host Billy Bush and engaged in lewd locker room talk while his mic was still hot.  Trump said the now infamous "...grab 'em by the pu$$y," but Billy got fired for it a year ago. Wah-Wah-Waaaaah. 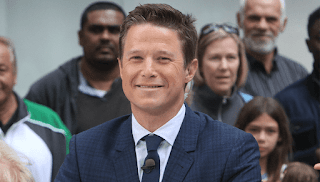 When the tape surfaced, Billy Bush had graduated from ACCESS HOLLYWOOD (an NBC production) to the TODAY Show.  He was co-host of the third hour of the show with Al Roker.  You got the feeling Al welcomed Billy the way you'd welcome ants to a picnic.  Then came the Rio Olympics.  Billy "broke" the news story that swimmer Ryan Lochte had been "robbed at gunpoint," according to Ryan Lochte.  Billy really didn't ask probing journalistic questions and we all later discovered that Lochte lied.  The racial undercurrent was that he blamed the crime -- a crime that did not happen -- basically on local minorities.  Poor brown people who live in the low-income neighborhood.  When Billy said on TODAY that Ryan was misunderstood, Al Roker charged in declaring "He lied!"  This was a rare case of Al getting loud and serious about something racially controversial. 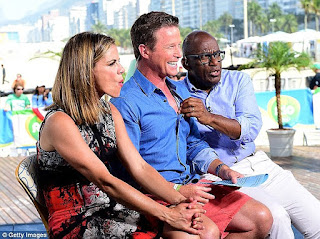 But Billy got canned for the ACCESS HOLLYWOOD tape leak.  I feel he was really canned for making NBC's favorite candidate look bad.  Just my opinion.  All of this seems to be playing out against a backdrop of white male privilege.  When Trump was an NBC show host, he repeatedly offended millions of us African Americans by tweeting and declaring that President Obama was not a real American.  He demanded to see his birth certificate.  Trump still kept his job.  Matt Lauer did extremely well financially working for NBC.  And so did former entertainment news host Billy Bush.

In his op-ed piece, Billy Bush wrote:  "The key to succeeding in my line of work was establishing a strong rapport with celebrities."

By the time I was approached to work on WNBC News, I had hosted my own weeknight celebrity talk show on VH1, I'd been invited by Lucille Ball to come over to her home for cocktails, I'd been taken out to dinner by Val Kilmer, I'd spoken to Mary Tyler Moore a few times on the phone, and I'd flown to London for an exclusive 1-hour VH1 interview with Paul McCartney.  Here's a short clip.
Now...about Billy Bush's success.  Maybe he wasn't hired solely because he's a member of the GOP Bush Family.  But I have a feeling it didn't hurt.  He was a DJ in Washington, DC on a rock morning radio show.  The show was called BILLY BUSH AND THE BUSH LEAGUE.  With no TV experience and no journalism background of any kind, he left that radio show and got hired by WNBC local news in New York.  I believe this was in the fall of 2001.  I watched his lifestyle features on the local morning news.  I'd worked for that same local TV news company.  In a Sunday section of THE NEW YORK TIMES, there was an article about the new dude on WNBC local news and a mention of the White House history in his family tree.  A few months after his local WNBC debut, Billy Bush was doing features on the TODAY Show.

By February 2003, Billy Bush was not only a regular on NBC's ACCESS HOLLYWOOD, he was hosting the Miss Universe pageant on national TV and he was promoting his primetime NBC revival of LET'S MAKE A DEAL.  He'd taped 5 episodes. 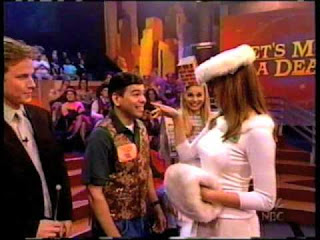 I started at WNBC in September 1992. A contract player.  My dream of the being one of the first Black people to do regular film reviews in the studio along with celebrity interviews was dashed when white producers -- my bosses -- kept commenting that they didn't think I had "the skills" to do that kind of thing.  I'd later learn that they'd never look at my resume or demo reels.  They ignored my history.  I was assigned to go out in the field and do funny live-shots at community events.  And I was told I should consider myself lucky to have that job.  I did get an occasional celebrity interview segment, but only after I fought for them.  I quit the show in January 1995 when I was told flat out by my boss that I would never be promoted to full-time and I would never advance to doing network features.

Billy Bush went network a year after he started on WNBC local and he went on to make millions.  He was advanced.  I don't think he had to fight for a promotion.  Not the way employees of color probably had to.  Still, his opinion piece brought up some good points.  And the writing was mature. I worked with Billy for one week.  New York City morning radio station, WPLJ, had its own version of AMERICAN IDOL for a week in 2003.  I was one of the guest judges.  Billy Bush was another one.  He struck me as an overaged, privileged frat boy who graduated without having studied much.

When Billy was fired from TODAY a year ago, leaving the show with only one contributor member of the Bush Family (Jenna Bush Hager), he was reportedly given a $9 million severance.  He's looking for work.  So am I.  I've been seeking steady work since 2011.

What a tale of three former NBC talents!  TODAY is erasing all memory of Matt Lauer and Billy Bush, related to two living former U.S. Republican presidents, is challenging Trump, our current Republican president.  If only NETWORK screenwriter Paddy Chayefsky had lived to see all this.

Here's some more of my VH1 history that WNBC local news bosses of mine ignored from 1992 to 1995.
My podcast can be heard at www.MOCHAA.podomatic.com.
at December 04, 2017