If you're a fan of the late, great queen of Broadway...that legendary belter, Ethel Merman, then be sure to watch Turner Classic Movies tonight.  You will see "The Merm" early in her career when her Broadway success made Hollywood take notice and put her in front of the cameras in the 1930s.  She was a babe who could belt out a tune and just about drown out the orchestra.  She's a supporting player tonight in my favorite Don Ameche musical.  Yes, Don Ameche.  I loved Don Ameche.  If you only know him from COCOON, the 1985 fantasy/comedy that brought him an Oscar for Best Supporting Actor, and TRADING PLACES with Eddie Murphy, catch tonight's TCM presentation of ALEXANDER'S RAGTIME BAND.  It airs at 10p Eastern.  Don Ameche had an excellent singing voice.  Don Ameche was an excellent all-around actor.  This 1938 Fox feature earned itself a Best Picture Oscar nomination along with five other nominations.  It's an Irving Berlin catalogue musical.  That means all the songs in it were written by Irving Berlin.  ALEXANDER'S RAGTIME BAND was tailor-made for its popular stars, Alice Faye and Tyrone Power. 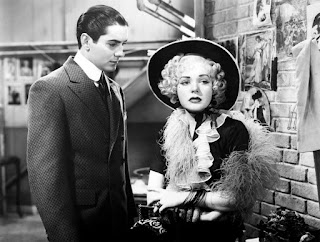 Berlin seems to have a pretty savvy businessman with Hollywood.  Whenever it made an Irving Berlin catalogue musical -- like 1942's HOLIDAY INN with Fred Astaire and Bing Crosby or 1948's EASTER PARADE with Fred Astaire and Judy Garland -- hits from the Irving Berlin songbook would be performed and Irving Berlin would write a couple of new songs for the production.  He did that with HOLIDAY INN.  He wrote Bing Crosby a new song called "White Christmas" and Berlin won the Oscar for Best Song of 1942.  He also gave Bing a hit song that made history in the record industry with its outstanding sales.  (Bing went on to sing it again in two other Irving Berlin catalogue musicals -- 1946's BLUES SKIES and 1954's WHITE CHRISTMAS.)  Here's the composer at the piano with Alice Faye, Tyrone Power and Don Ameche. 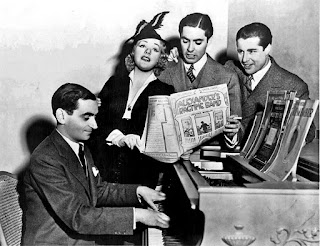 In ALEXANDER'S RAGTIME BAND, Don Ameche introduces a tasty new Irving Berlin love song called "Now It Can Be Told."  It gets a sweet reprise later done by the film's leading lady, Alice Faye. Maybe she didn't have the impressive acting chops of fellow singer Judy Garland, but her lush and lovely voice coupled with her glamorous looks and warm personality to match made her a Fox star. 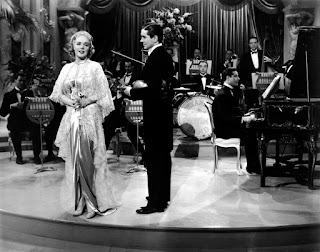 This is one of the Fox films that paired Alice Faye with the equally gorgeous Tyrone Power. 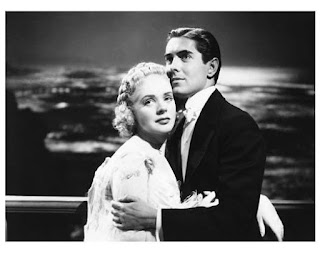 He plays Alexander.  He has a band.  The action starts in about 1915.  Alice plays a singer who's got a great voice but she's not at all refined.  He brings out the best in her voice.  They bicker but, musically, they're made for each other.  He's too refined and she teaches him how to make his highbrow music more accessible.  Don Ameche and Jack Haley play two guys in Alexander's band.  Of course, the two bickering characters become sweethearts and then break up before the happy ending.  During the break up, the band needs a new girl singer.  Enter Ethel.  Before she speaks one word of dialogue, she hits a note.  A loud note. 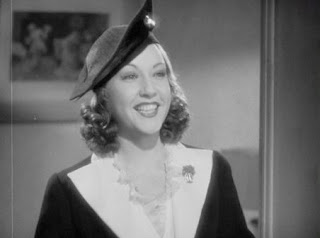 In true Golden Age Hollywood fashion, the story covers about 20 years...years that include World War I.  But none of the characters appears to age.  They look as young and fresh at the end as they did at the beginning. 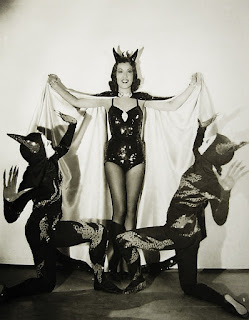 Ethel gets a medley that I absolutely love and she gets outfits that flatter her babe figure.  In the film's final number, she gets to belt out "Heat Wave," an Irving Berlin hit introduced on Broadway by another Ethel -- Ethel Waters. 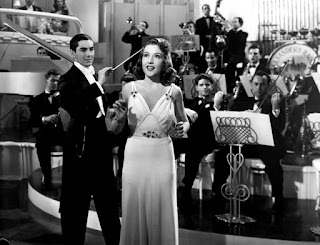 Here's why I continually give thanks for the career opportunities I've had while I seek new ones.  When I was new to New York City in the mid 1980s, hired by WPIX/Channel 11, I interviewed Alice Faye.  She was doing a special appearance at the time.  Oscar nominations had been announced and a friend of hers was a nominee.  We were taping the interview, but there was technical problem with the camera that had to be fixed.  Alice Faye and I retreated to a nearby room for 20 minutes and chatted like we were old buddies.  What kicked it off was my singing one of her old hits to her.  She said, "Kid, how do you know that song?!?!"  She started singing along to "Slumming on Park Avenue," an Irving Berlin song she sang in 1937's ON THE AVENUE.  Then we sang a couple of others.  When she realized that I knew her career and what she'd done, she got even friendlier and let her hair down.

You know the reports of sexual misconduct in Hollywood that we've gotten recently?  That kind of male misconduct was happening back in her heyday too.  She told me that her studio head boss, Darryl F. Zanuck, was constantly hitting on her to do the "grand horizontal."  Her made some of her time at Fox a little difficult because of her rejections.

Alice Faye said this to me off-camera about working for Darryl F. Zanuck:  "I had one prayer back then: 'Dear Lord, Please let me live long enough to see him die first.'"  The Lord answered Alice Faye's prayer.

When the camera was fixed, she made it a point of looking straight into the camera and saying to any Academy member who was watching, "You have got to give the Oscar to Don Ameche!"  She loved him so. 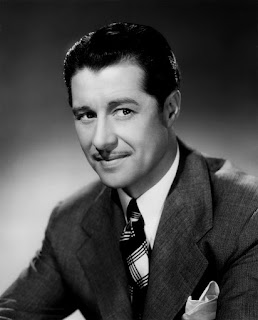 I left WPIX to accept a job offer from VH1.  During my wonderful time as a talk show host, one of my guests was Don Ameche.  The entire floor crew dug Don Ameche.  A handsome, trim, classy and grateful gent.  When I was a kid in L.A., his comedy albums would have me doubled over with laughter.  He and Frances Langford were "The Bickersons," a constantly arguing middle-aged couple.  Off-camera, I told him what Alice Faye had said about Zanuck and he broke out laughing.  "That's Alice," he replied.  Don Ameche was one of those performers who was so versatile and talented that it was almost subliminal.  He could do drama, thrillers, action movies, biographies, screwball comedies and musical comedies.  On Broadway, he starred in Cole Porter's SILK STOCKINGS.  In the film version, dance was added and his role went to Fred Astaire.

As for Don Ameche, he did get the Oscar for 1985's COCOON.  He was even better in the movie he was promoting on my talk show.  That film was 1988's THINGS CHANGE, a drama directed and co-written by David Mamet.  Wow, is Don Ameche excellent in that.  And what a wonderful guest he was.  I was so lucky.  I interviewed former Fox stars Alice Faye and Don Ameche in my TV career.  Color me grateful. 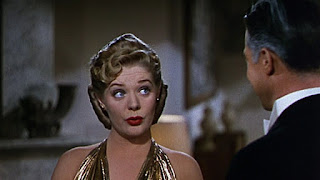 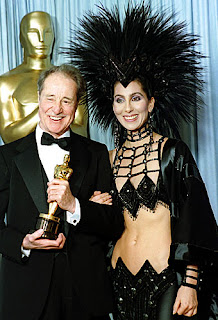 There you have it.  Crank up the volume for some early Ethel Merman.  Hear Don Ameche and Alice Faye sing "Now It Can Be Told," the number that brought Irving Berlin an Oscar nomination for Best Song.  The musical romance, ALEXANDER'S RAGTIME BAND, airs at 10p Eastern tonight -- December 14th -- on TCM.