I have a couple of recommendations for you if you're up for watching two classics that star a true icon from the Golden Age of Hollywood.  Fred Astaire was the epitome of poetry in motion in his classic movie musicals.  Several of his best were original movie musicals.  He danced, acted, choreographed and sang.  He introduced songs that are now part of our Great American Songbook.  Some are "Cheek to Cheek," "Pick Yourself Up," "The Way You Look Tonight," "Let's Call the Whole Thing Off," "One For My Baby," and "Something's Gotta Give."  Fred Astaire did extremely complicated, physically taxing and artistically challenging work.  He made that work -- his dance numbers -- look so easy that the Academy probably didn't realize how grueling it was.  Have you ever danced to an upbeat tune in a tuxedo at a party or a wedding reception?  You broke a bit of a sweat, didn't you?  Fred Astaire danced to fast tempos (look at his title tune number in 1935's TOP HAT with an original score by Irving Berlin), he lifted and twirled Ginger Rogers and he advanced the emotions of the scene in a tuxedo.  He advanced the art of the screen musical.  However, he never received an Oscar nomination for his work in a musical.  Why?  Because they were musical comedies and traditionally, for some reason, the Academy gives Oscars to performers to either die or cry ... or both ... in a musical with a severe heartbreak.  Yul Brynner in THE KING AND I (the king dies), George Chakiris in WEST SIDE STORY (the gang leader dies), Rita Moreno in WEST SIDE STORY (the gang leader's girlfriend cries after his tragic death), Barbra Streisand in FUNNY GIRL (Fanny Brice cries while singing "My Man" at the end because her husband wants  divorce), Anne Hathaway in LES MISERABLES (her character sings, cries and dies).  There are exceptions -- like Julie Andrews as MARY POPPINS and Rex Harrison in MY FAIR LADY.  In 1953, Fred Astaire delivered one of his finest screen performances in Vincente Minnelli's big gem of a movie musical comedy called THE BAND WAGON. 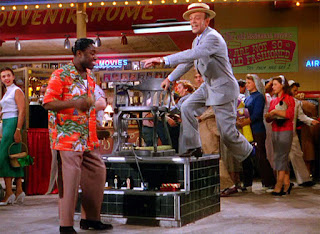 Here is Astaire playing a veteran Hollywood song and dance man who hasn't had a hit film in a few years.  Like Astaire, Tony Hunter's trademarks starting in the 1930s were a top hat, white tie and tails.  Now he has an offer to reinvent himself in a Broadway musical with numbers that will have a contemporary jazz beat.  He's insecure about his talents. relevance and height.  He starts to bicker with his gorgeous leading lady, a rising ballet star who appears to be a little taller than he is.  And she's years younger.  Fred Astaire and Cyd Charisse are magical in THE BAND WAGON.  Their dancing together is the stuff of Heaven. 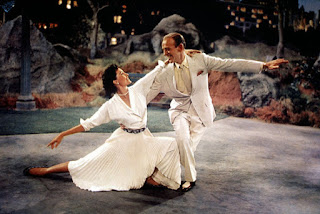 Astaire not only artistically challenged himself with a new style of jazz choreography in the celebrated finale, the complicated but fabulous choreography by Broadway's athletic Michael Kidd, Astaire also disrupted aging.  He made this musical when he was in his early 50s. 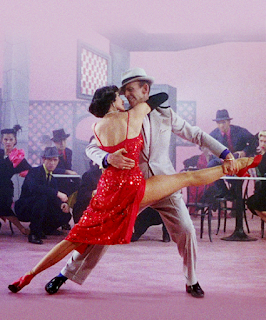 If Fred Astaire had ever received a Best Actor Oscar nomination for one of his musicals, it should have been for THE BAND WAGON.  He received an Honorary Oscar from the Academy in 1950. His one Oscar nomination came in the Best Supporting Actor category for 1974's THE TOWERING INFERNO.  In that all-star big box office champ of a disaster movie, he wore a tux and got really dirty as one of the high rise fire survivors.  For a few seconds in a gala dance floor party scene, he dances with Jennifer Jones.  The cast also included William Holden, Paul Newman, Steve McQueen, Faye Dunaway and O.J. Simpson.

That dramatic role as a classy con man was no where near as challenging or as well-written as his part in THE BAND WAGON...but there you have it.  Astaire simply made the dancing/acting art look too easy, I guess.  Here's the famous "Dancing in the Dark" number from THE BAND WAGON.  The two bickering artists have settled their differences and found a common rhythm while strolling through Central Park.
In the first 10 minutes of THE BAND WAGON, as the aging Hollywood star on a train to New York City, he arrives and thinks some press members have gathered to meet him at the train station and get a quick interview.  Wrong.  Ava Gardner, his pal, is one the same train and she's who the press guys want to see.  Astaire and Ava Gardner, in her cameo, have a brief scene together. 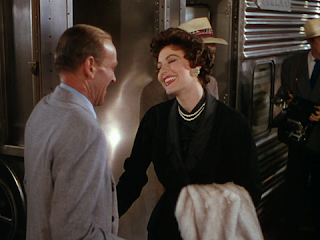 Fred Astaire's first dramatic role should have brought him a Best Supporting Actor Oscar nomination.  He's quite effective in a tough social commentary film.  1959's ON THE BEACH is a plea to post World War II mankind to stop the proliferation of nuclear weapons.  In the film, World War III has ended but the earth's atmosphere has been polluted with nuclear fallout.  There is no cure for the radiation sickness.  Populations of whole cities in various parts of the world will die in this apocalyptic tale.  Astaire plays a scientist named Julian Osborne.  He helped advance atomic power, never dreaming that mankind could do itself in with it.  Julian is brilliant and lonely.  There's no one special in his life as the crisis expands.  He has several scenes in ON THE BEACH with Ava Gardner as Moira, the beautiful mature woman who's survived a series of unfulfilling affairs with men.  She will find true love, at last, from Gregory Peck's character.  He plays the captain of the submarine that Julian's on as they head to Australia to test for fallout. 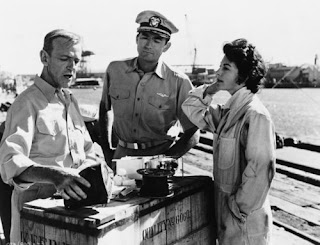 Astaire has some strong, good scenes with Ava Gardner, Gregory Peck and Anthony Perkins in this one.  You get the feeling that the performer personally agreed with Stanley Kramer's cautionary atomic age message. 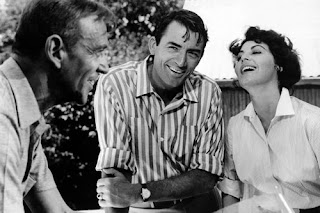 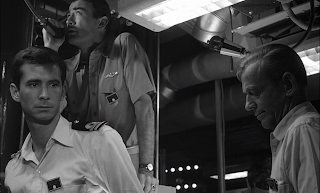 There you have it.  Fred Astaire with Ava Gardner in two of his best films -- films that didn't but should have brought him Oscar consideration.  See for yourself in 1959's ON THE BEACH and in the terrific 1953 classic musical, THE BAND WAGON. 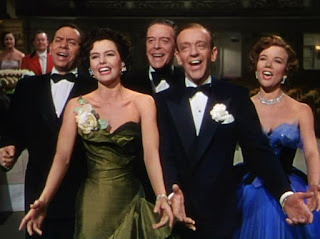