I may have written about this already.  I don't remember.  But, if I have and you read it, please pardon me while I write about the experience again.  Because... it was one of the most memorable, most thrilling, most awesome moments of my life.  And it happened because of my love for movies.  The experience involves the American legend who was born on this day in history -- Singer and Oscar-winning actor, Frank Sinatra. 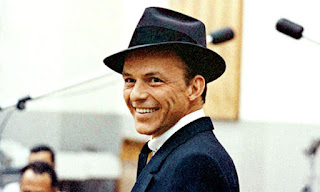 One morning, after I'd graduated from Marquette University in Milwaukee and was still living in an apartment on the campus area, I was doing what I usually did on a Saturday morning.  This was well into the 1970s.  I was having coffee and listening to The Roy Leonard Show on my radio.  That show came in from WGN in Chicago.  Chicago loved Roy Leonard.  I loved Roy Leonard.  He had a cool show with great guests.  That particular morning, his guest was one of the greatest -- Sophia Loren.  Roy asked a movie trivia question and the caller with the correct answer would get a prize.  I could not believe that I was fast enough to dial in Milwaukee, get through to his Chicago phone lines...and win!  I won two prizes.  The first was...I got to gush an extremely enthusiastic "Hello!" to Sophia Loren and blurt out that we have the same birthday.  September 20th.  The other prize was -- two tickets to see Frank Sinatra in concert at the Arie Crowne Theater! I grew up in a South Central L.A. home where I was taught by my Black Catholic parents that loving Frank Sinatra was a special obligation.  Like going to church on Easter and Christmas morning.

I had a friend and fellow graduate who lived in the same building.  Not only that, she had a car.  And she loved Frank Sinatra!  Anna was my date. 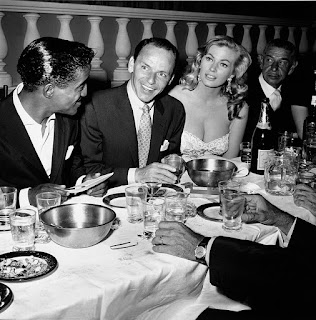 We were probably one of the youngest couples in the packed theater that night.  But not the youngest-acting.  Women as old as our mothers were walking up to the stage and tossing flowers onto it like they were teen-agers.

As for the tickets I'd won.  Are you ready?  We were in the absolute first row.  Any closer and we would've had to sit behind Sinatra and hold musical instruments.

He was in supreme form.  And this was Frank Sinatra I'm talking about.  His voice was magnificent, the orchestra was terrific and he was having such a good time that he launched into about ten minutes of stand-up comedy.  He was telling jokes and stories that not only broke up the audience, they had the orchestra members belly laughing too.

Of course, there were encores and standing ovations and cheers and whistles.  It was an extraordinary concert. 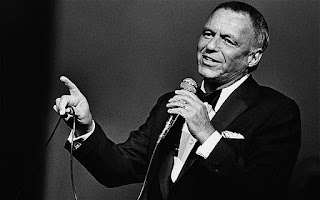 Here comes the moment that made me feel as if my soul had briefly left my body and went to Heaven:  As Frank Sinatra was making his joyful exit to the wings, he looked at me and motioned me to walk over to him.  He came to the edge of stage, leaned down...AND SHOOK MY HAND!

I went full Ralph Kramden on THE HONEYMOONERS:  "Humina, humina, humina."  There I was, shaking the hand of Frank Sinatra, a larger than life artist who was smiling at me.  There were goosepimples over every single inch of my body.

And all because I knew the name of the song from Sophia Loren's 1967 film, A COUNTESS FROM HONG KONG.