On CALL ME BY YOUR NAME

When this movie ends, you will wish to be in someone's arms at that very moment.  I know I did.  If I was asked to contribute my list of the Top Ten films I've seen this year, CALL ME BY YOUR NAME would be on the list.  Based on a 2007 novel of the same name, this film, occasionally subtitled, was directed gracefully by Luca Guadagnino.  The story takes place in the Northern Italian countryside in the summer of 1983.  It is so deeply, beautifully sensuous and touching.  It's a story about the discovery, joy and heartache of first love.  We follow two males. 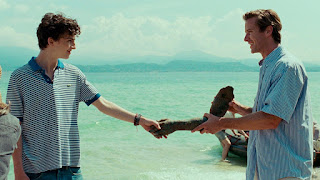 When I started reading terrific reviews about this film months ago, some initial headlines summed it up as an older man falling for a younger male.  Those summaries were misleading.  This isn't DEATH IN VENICE.  It's not like Woody Allen films with a 40 year old guy dating a girl who's in high school.  Actor Timothée Chalamet plays the 17 year old Jewish American kid living with his totally cool parents.  What an excellent performance he delivers as Elio!  Elio's father is an archaeology professor who invites a graduate student to live with his family for the summer.  The student, Oliver, helps the professor with academic writing and research.  A 17 year old bookworm and a grad student. That's not a May-December relationship.  Armie Hammer plays the handsome, responsible, friendly and forthright grad student who's a good fit in the professor's warm villa.  I kept watching Hammer and tried to think of what other movie I knew him from.  The next day, it came to me.  He was the lead in the unsuccessful movie version of THE LONE RANGER that with Johnny Depp as Tonto.  CALL ME BY YOUR NAME shakes off that flop.  Hammer also delivers an excellent performance.  The two actors bond and blend so well.  Their acting shines with spontaneity and truth.

Elio may be a bookworm with a skill for playing classical piano, but he's also a typical teen in many ways as we see when he's hanging out with other teens. That's very refreshing.  He's not a highbrow outsider.  He's a 17 year old guy whose body is awkwardly starting to express sexual awareness and romantic feelings.  There's a gangling eroticism about his coming-of-age.  With insecurity and a few wisecracks, he sets out to seduce Oliver.  Oliver responds with discipline, humor and tenderness. 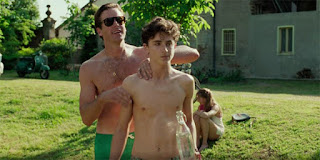 I purposely avoided reading many reviews because some in the new generation of film critics give away much too much in their reviews.  I'm glad I didn't read all those reviews.  I was surprised at events that unfolded.  It took me on an emotional journey.  That's why I won't tell you any more of the action.  If you choose to see it, and you should, you'll be surprised too.  CALL ME BY YOUR NAME did put a few tears in my eyes.  We're coming to the end of the year.  For those of us who have been single for a long, long time, I've described getting through the holiday season like walking from one end of an emotional tightrope made of tinsel to the other starting on Thanksgiving.  It seems like everyone is half of a couple.  Except for you.  You feel like the purser on Noah's Ark watching happy couples stroll through the season two-by-two.  You wait for those few minutes past midnight when all the Happy New Year kissing is done and things get back to normal.  But, to be honest, you want to start the New Year with a kiss also.  CALL ME BY YOUR NAME made me wish I could once again be that sweet object of desire, be that one who arouses romantic longing.  Here's a trailer for CALL ME BY YOUR NAME:
If you saw THE SHAPE OF THINGS, there's a government scientist in that sci-fi fantasy who speaks Russian.  He's played by actor Michael Stuhlbarg.  He plays Elio's loving, bearded teddy bear of a Jewish father in this romantic drama.  I truly, madly, deeply hope Michael Stuhlbarg gets a Best Supporting Actor Oscar nomination for his performance in CALL ME BY YOUR NAME. 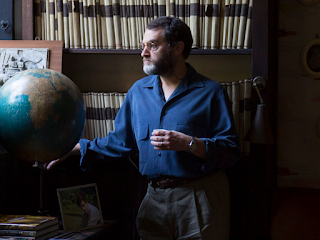 I fell in love with the wise dad. 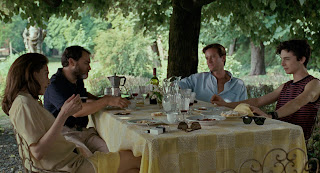 You must stay through the final shot of the closing credits.  You must.  There's remarkable acting in it.

When that shot is over and the closing credits come to a conclusion, we see that CALL ME BY YOUR NAME is dedicated to a popular actor/director we lost this year -- the talented Bill Paxton of the movies ALIENS, TWISTER and the HBO series, BIG LOVE.

Have a great weekend. Spend time with someone who loves you and Happy New Year.  I'm gonna treat myself to some ice cream.  Peach-flavored.
at December 29, 2017