Don Cheadle Is MILES AHEAD

I wish I had the acting chops that Don Cheadle has.  What an exceptional actor.  At a cineplex this week, I saw a trailer for his new film.  He plays the late jazz legend, Miles Davis.  Davis was creative, mercurial, charismatic and multi-talented. He was one of the most innovative and influential artists in music.  However, Don Cheadle could not get the financing he needed to make this movie unless he hired a Caucasian co-star.  That was a "financial imperative."  This news was in a print article about Cheadle and his film.  His impressionistic biopic is called MILES AHEAD.  Cheadle not only stars, he directed the film. 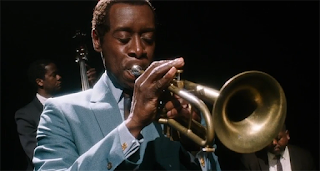 The news about that "financial imperative" for filmmaker Don Cheadle is not surprising.  That's how the movie and TV business behind-the-scenes has been for quite some time.  However, the story came out during this year's diversity issue with Hollywood and the Oscars.  It hammered home the point that diversity and more enlightened thinking from studios execs who can green light projects is sorely needed.  In archaic Hollywood thinking, a film or TV show is only widely marketable if it has white actors.  My personal experience with this attitude came in 1991.  I was the host of a syndicated game show pilot that got a one-week summer tryout in syndication.  I loved the entire experience of doing that show.  It had a terrific production crew, the trio of celebrity panelists was fun and I had a wonderful time working with the veteran producer, the man who gave us The Hollywood Squares.  Producer Jay Redack worked on The Hollywood Squares, the classic edition with Paul Lynde and Rose Marie.  From what I was told, when I wasn't present, TV execs commented that they really liked our game show but asked Jay if America was ready for a black game show host.  That's Hollywood.  Unfortunately, our imaginative and well-produced game show pilot didn't get picked up.

But enough about me.  Let's get back to Don Cheadle as Miles Davis. 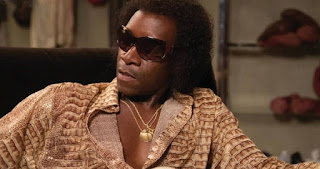 I went to the movies this week and, before the main feature began, the trailers played.  The trailer for MILES AHEAD made me eager to see it as soon as it comes out.  Take a look.  The white co-star Cheadle plays opposite is the gifted Ewan McGregor.  He co-stars as a national magazine journalist.
Don Cheadle was a Best Actor Oscar nominee for 2004's HOTEL RWANDA.  Cheadle is a veteran of TV shows and movies.  I first noticed him in a 1995 crime mystery, the very fine and very under-appreciated DEVIL IN A BLUE DRESS.  This 1950s story, based on a novel by Walter Mosley, starred Denzel Washington as an unemployed World War II veteran in South Central L.A. who winds up being a private eye.  Don Cheadle, as a killer called "Mouse," gave a performance that just went through you like a shot of adrenaline.  Don Cheadle just about stole Devil In A Blue Dress and should've been mentioned for the Best Supporting Actor Oscar race.  Rent that DVD and you'll see what I mean.

To me, it's hard to believe that Cheadle has only one Oscar nomination to his credit.  Denzel has two Oscar victories and a total of six nominations to his credit.  I totally dig Denzel but I find Don Cheadle to be a more fluid, more flexible actor.  How many times have you ever heard someone say, "That scene Denzel Washington did was so funny!"?  Cheadle can be a cold-blooded killer.  Cheadle can make you break up laughing.

He was a hoot as Buck Swope, the adult film star who made some unfortunate fashion statements.

Don really hit the right note as the unlikely choice to play Sammy Davis, Jr in THE RAT PACK.  Man, he was terrific!  Ray Liotta played Frank Sinatra in this HBO TV production and he also delivered one of his best performances.  Cheadle is not the singer/dancer that Sammy Davis, Jr. was but Cheadle did move well.  The main thing he did so brilliantly was to play Davis' complicated, angry inner self.  He was the extraordinary entertainer who was the member of the enormously popular group of guys that made movies like Ocean's 11 and headlined top Vegas nightspots -- but he was the only member of Frank Sinatra's famed Rat Pack who'd suffer racial discrimination no matter how famous he was.  Sammy was playing in clubs where black people were not allowed to use the swimming pool.  You need to see Don Cheadle in that 1998 HBO feature, available on DVD.

CRASH drove off with the Oscar for Best Picture of 2005.  He gives a solid performance in that film as the impressive Los Angeles police detective who seems capable of impressing everyone except his mother.  Cheadle's vulnerability is most moving in that film.

In 2007, Kasi Lemmons didn't get nearly enough attention for the highly entertaining biopic she directed called TALK TO ME.  By the time Don Cheadle starred in this winner, he had the Oscar nomination for Hotel Rwanda to his credit.  Co-starring with him in this comedy/drama are future Oscar nominees Taraji P. Henson (Best Supporting Actress Oscar nominee for 2008's The Curious Case of Benjamin Button) and Chiwetel Ejiofor (Best Actor Oscar nominee for 2013's 12 Years a Slave).  Cheadle stars as Ralph "Petey" Greene, a verbally free-wheeling ex-convict who made so many people laugh with his outspoken, edgy humor on Washington, DC radio that he was tapped to be a guest with Johnny Carson on NBC's Tonight Show. Petey was a forerunner to Howard Stern, if you will.  Cheadle plays Petey as a hot mess that you just couldn't help but love.  Here's a short clip with Don, Chiwetel and Taraji.

Here's another short clip with Don as Petey on the air in his new radio host job.
I love me some Don Cheadle in Talk To Me!  This biopic is funny, moving and inspiring.  Petey Greene was really ahead of his time with his comedy.  Today, he'd probably have a home on Comedy Central or be a frequent guest with Bill Maher on his Real Time HBO show.

Miles Ahead opens on Friday, April 1st.  It looks like critic A.O. Scott of The New York Times gave some Oscar buzz to Don Cheadle for his performance. 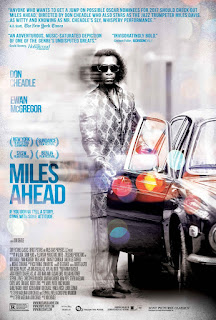