Paul Reubens is a gifted actor.  Yes, his Pee-Wee Herman character is pretty much a kiddie show host character designed to entertain grown-ups.  Nonetheless, Pee-Wee is a fabulous creation and the truly hard work that went into the creation and performance probably is often overlooked by critics because of Pee-Wee's goofiness.  Look at the choreography, the physicality of Reuben's performance.  The way Pee-Wee carries himself.  That walk. His arm movements. His facial movements. That nasal, upper register voice and his distinctive laugh.  Look at Pee-Wee's sharp, fastidious styling -- from the close-cropped haircut, to the tailored suit and bow-tie down to the white loafers.  All that took imagination and time.  Pee-wee is a man-child.  Jerry Lewis was a man-child in his hit 1950s Paramount comedy movies with Dean Martin.  But Pee-wee isn't manic like those Lewis characters.  He's more...well, more sophisticated in his quirkiness. 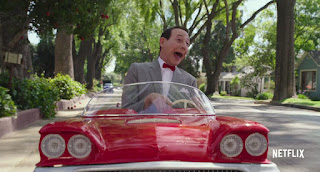 PEE-WEE'S BIG HOLIDAY marks Paul Reubens return to the character in a feature film.  The film is in limited release.  It's streaming on Netflix.  This isn't a sequel or a follow-up to one of the earlier Pee-Wee film adventures.  This one stands on its own with some familiar faces from Pee-Wee's previous adventures blended into it.

This is a road movie, one with a road trip sparked by a bromance.  Pee-wee lives in Fairville, a pleasant small town.  He has a job working in the local diner.  He has townsfolk who like him.  But he doesn't really seem to have much of a life.  Why?  As he says to one local salesman with some slight irritation, "You know I don't want to go anywhere or try anything new." 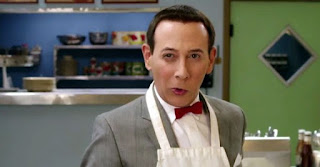 Then one day, when he's alone in the diner, in walks a big muscular hunk who just got off his motorcycle.  That hunk is...actor Joe Manganiello as actor Joe Manganiello.  There's an instant and innocent attraction and an immediate friendship.  He invites Pee-wee to his upcoming birthday party in New York City.  New York's not exactly close to Fairville.  The visiting actor is to Pee-wee what Meryl Streep's character was to the Albert Brooks character in the afterlife comedy, Defending Your Life. 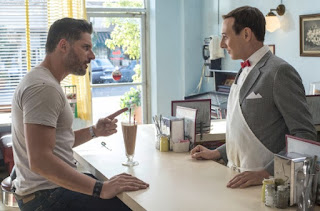 Manganiello really wants Pee-wee to come to the party.  Pee-wee's personal mantra seems to be "I can't leave home."  Joe says "Stick around here or live a little." 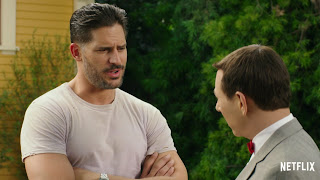 Joe leaves.  Pee-wee decides to hit the road to attend the party and adventures begin.  Or, more accurately, misadventures begin.  One of the first things to happen is that he witnesses a bank robbery committed by three dames who look like they took fashion tips from the women in the black and white 1965 cult classic from Russ Meyer, Faster, Pussycat! Kill! Kill! 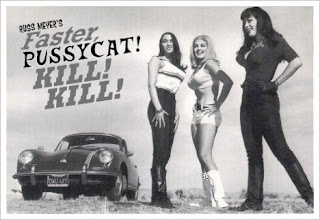 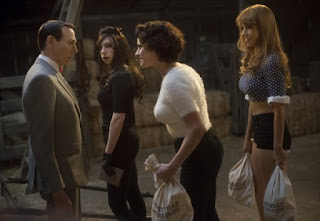 Is this movie silly?  Yes.  Sweetly so.  And I have no problem with that.  Paul Reubens, with his Pee-wee persona, totally gets what Walt Disney said:  "Adults are only kids grown up, anyway."  And Pee-wee's Big Holiday is like a 90 minute movie that kids wanted to see on a Saturday afternoon.  I had some frustrations this week and I needed a few laughs.  I started watching Pee-wee's Big Holiday well after midnight.  I had to cover my mouth more than once so my shrieks of laughter wouldn't wake the house and disturb the other guys. The bit with the farmer's daughters made me laugh, the Free Wheelin' Mobile Salon trio made me laugh and the 1-minute bit with Pee-wee, a balloon and some Amish people was so juvenile and, man, did it break me up.

Joe Manganiello does quite well in the comedy department.  He's relaxed and likable.  And you do get giggles seeing him as big blue hunk, blue because the one person he wants at his swanky, festive party is not there.  His Pee-wee.

It was just the kind of lunacy I needed to perk up my spirits.  I read a review that picked the movie apart like it should've been in the same league with the best of Chaplin and Keaton.  Wrong.  At times, Reuben's character is reminiscent of a silent screen star from the 1920s.  There's a hint of actor Harry Langdon in his Pee-wee.  But this is just playhouse comedy in which no one gets hurt and there are no dirty words.  It may not be a great comedy, but it sure is a heck of lot better than two Kevin Hart comedies I had to review and a couple of recent Jennifer Aniston comedies.  Did you ever see the Preston Sturges 1941 classic, Sullivan's Travels?  When the rich studio head (played by Joel McCrea) disguised as a hobo gives a ride to The Girl (played by Veronica Lake) after she bought him breakfast, she talks about movies.  She loved a silly but funny comedy much more than some "deep dish" drama.  Sullivan's Travels is also a road movie, one that celebrates all those artists who work hard to make us laugh in some form or another.

I did notice that average movie-watchers took to Twitter and Facebook and got a kick out of the movie. I'm in that group.  I got a kick out of it too.  I think Preston Sturges would've loved it.  Especially the scene with the nine food-bearing farmer's daughters.  I repeat, Paul Reubens is a gifted actor.  He gave me the gift of some much-needed laughter with Pee-wee's Big Holiday now streaming on Netflix.  The movie is a Judd Apatow and Paul Reubens production.
at March 19, 2016