On HELLO, MY NAME IS DORIS

I love Sally Field in this new movie.  Doris is a warm yet withdrawn little oddity in New York City, a place where oddities can blend into everyday life.  She's a true character and a good person who covers up a broken heart with colorful clothing.  I read the Manohla Dargis review of HELLO, MY NAME IS DORIS in The New York Times.  This movie was described at the top of that review as being about "an older woman's love for a much younger man."  Well, that's part of it but it's not the whole picture.  At least, not to me.  And I could relate to Doris. 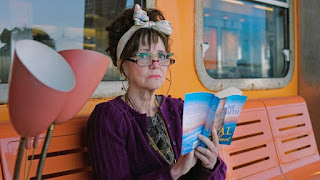 Sally Field disrupts age again onscreen.  She's been nominated twice for Best Actress -- and she won both times.  There was her victory for Norma Rae (1979) and then for Places in the Heart (1984).  Her third Oscar nomination was in the Best Supporting Actress category for her remarkable work as President Abraham Lincoln's wife in Lincoln (2012).  When Sally Field played First Lady Mary Todd Lincoln opposite actor Daniel Day-Lewis, she was about 64 and ten years older than her leading man.  In Hello, My Name Is Doris we see her kissing handsome and 30-something actor Max Greenfield -- more than once.  And it's fabulous to see because we like Doris.  We really, really like her. 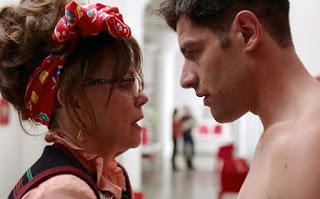 Doris was named after Doris Day.  When the film opens, we see Doris attending the funeral mass for the person who named her after Doris Day.  That person was her mother.  On Staten Island, Doris Miller spent years taking care of and being attentive to her mother.  Doris works at a trendy office close to the Chelsea section of downtown Manhattan.  In between life with mother plus ferry and train rides to the office, Doris became a hoarder to such an extent that it troubles her brother and his meddlesome wife.  Doris can't seem to throw anything away and she can't keep from collecting new-found items that a stranger has thrown away.  When she's clutching one such item in the company elevator, she has a "meet cute" as they used to say in Hollywood.  In the crowded elevator, she comes very face-to-face with the extremely attractive young man who turns to be her new boss.  He's probably in his early 30s.  Doris is probably about 60.

She's immediately smitten with him.  She tells her widowed and bossy best friend, delightfully played by Tyne Daly, and her friend's granddaughter.  The granddaughter helps Doris concoct a fake and young personality to post on Facebook in order to friend and follow John Fremont, the kissable new boss.

John truly does like Doris.  She manipulates an out-of-work encounter with him by dressing up and attending a rock band's club date in a hipster-drenched section of Brooklyn.  John sees her there.  Doris is so unique and unusual that she's immediately embraced by audience members and the band.  And these audience members are total hipsters.  As one says, "I teach in a gay pre-school..."  From then on, Doris and John become pals.  However, in her sweetly delusional mind, he's got a serious crush on her but doesn't know how to express it. 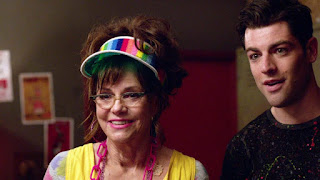 This imagined romance is a great engine to drive the story.  It's a hook.  The more important significance of John Fremont is his impact on this shy, overlooked person who's gotten lost in her own arranged clutter at home.  John Fremont is the tasty cheese that brings this unhappy little mouse out of her hole.  He causes her to come out and see the possibility of a new life.  Here's a trailer.
Loneliness that's layered underneath loving obligation can tatter one's spirit.  Doris took care of her mother for a long, long time and then became a hoarder.  She missed some opportunities for a new life because she was taking care of her mother.  Her brother chose to take care of himself and his business.  His business did well, he married and has a nice clutter-free home.  He's blind to his sister's loneliness and the uneasy task she undertook of being a caregiver.  The brother shows that sometimes the people who've been up to you the longest in life -- your immediate relatives -- are the ones who don't see you at all.  I've been in Doris' position with a parent who had years of major financial needs.  I passed on some opportunities so I could be responsible and keep paying Mom's bills.  Not that I was a hoarder, but I knew Doris' clutter was there to fill a hole in her heart. I've shared her flaws and her contained rage.

In the elevator, in the office, in a club, John Fremont sees Doris Miller.  And she eventually comes to see herself in a different way.

Like a lot of baby boomers, I grew up watching Sally Field.  Like Tom Hanks (her Forrest Gump co-star), she's an actor we first met starring on an ABC sitcom who went on to win two Oscars for dramatic performances.  She was a perky and adorable Gidget and then, also on ABC, The Flying Nun.  She also did dramatic acting in ABC made-for-TV movies.  Her astounding breakthrough came when she unexpectedly hooked the highly-coveted 1976 role of Sybil, the story of a young woman desperately seeking psychiatric help to get to the cause of her multiple personalities disorder.  Doris Miller at times looks like she would've been one of Sybil's personalities.  Field's dynamic, memorable and heartbreaking performance in that NBC mini-series made Hollywood take her seriously after treating the young actress like fluff in the talent department.  Then came the drama, Norma Rae.  The rest is movie history.  In 2006, Sally Field returned to ABC as the outspoken, understanding mother on the Brothers & Sisters series.

What a treat to see Sally Field do comedy again.  She's so good at it.  As for Max Greenfield, they are mighty fine chemistry together in Hello, My Name Is Doris.  I hope there's a project that can re-team these two actors. 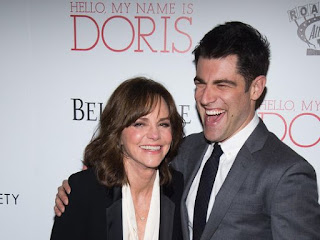 Sally Field is the perfect choice to play Doris.  She makes the character ridiculous yet real.  She's aware that there's more than the "older woman/younger man" angle to this feature.  She's in full grasp of Doris' complications that make her so human.  This movie put a big smile on my face.  Keep Hello, My Name Is Doris in mind.  This indie movie about Doris Miller's re-entry into the world runs only 1 hour and 35 minutes.