With a title like that, you'd think it was one of those Burt Reynolds Smokey and the Bandit car chase movies so popular in the 1970s.  Wrong.  MIDNIGHT SPECIAL is a relatively low-budget science fiction thriller that engrossed and gripped me.  I had no idea what this new release was about when I entered a Warner Bros. screening room to see it on Sunday evening.  The next morning, I'd be interviewing three of its lead actors.  At the heart of Midnight Special is a little boy who is not like us.  He has an extraordinary, supernatural and mysterious power.  Aside from that, he's just a regular kid who loves his dad and loves reading comic books.  However, his power makes him the target of some dark forces. 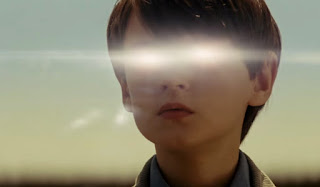 We're in Central Texas.  The blue collar dad, who will do whatever it takes to protect his son, is in flight again with an adult friend, a good Texan who is also determined to protect to special child.  The two men reunite the boy with his outcast, loving mother.  But there's another destiny for little Alton.  Midnight Special has the hint of a modern-day Bible story about it. 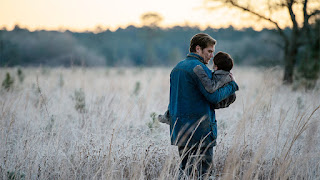 When I was a kid, going to a Saturday matinee movie or to the drive-in at night with my family was my favorite pastime.  I hoped the movie would be entertaining, interesting, energetic and surprising.  Midnight Special is that kind of film -- and it has emotional depth.  The deep love the father has for his son...a love shared by the mother....gives the movie a glowing soul.  He believes in his son's goodness.  Also, there is plenty of action that will make you gasp.  I gasped while watching it.  Here's a trailer.

There's action.  There's violence but not the graphic Quentin Tarantino kind of violence.  You can take kids to see this PG-13 thriller.  I think kids will like this escapist fare that focuses on an unusual and sweet kid doggedly pursued by adults.  Some adults see him as a savior.  Others see him as a weapon.  The U.S. government wants the boy for top secret observation. 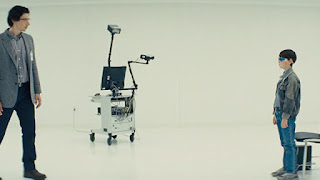 There hasn't been much publicity for Midnight Special but, as I wrote, I really enjoyed it.  It should be publicized and marketed.  The movie opens in selected cities on Friday, March 18th.  I taped a TV interview with Michael Shannon.  HBO viewers recognize him as the lead character on the 1920s crime series, Boardwalk Empire.  Shannon was a Best Supporting Actor Oscar nominee for his performance in 2008's Revolutionary Road starring Leonardo DiCaprio and Kate Winslet.  I also interviewed Joel Edgerton, who plays sort of a disciple to the child as the father's friend and Kirsten Dunst who stars as the boy's mother.  You see all three in this photo here. 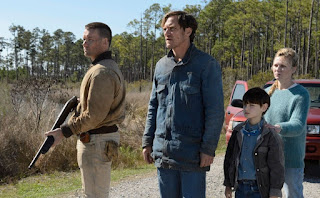 Keep Midnight Special in mind for weekend entertainment when it opens.  This film, written and directed by Jeff Nichols, was an unexpected weekend treat for me.  A good movie with good actors.  I plan to see it again.  My TV interviews with Michael Shannon, Joel Edgerton and Kirsten Dunst will be posted online before its March 18th opening day. 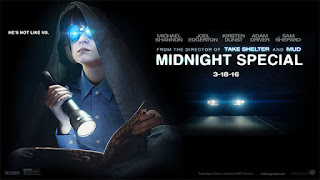 If I could change one thing about this movie, it would be the title.  I think He's Not One of Us would be better than Midnight Special.  But that's just me with a quibble.  Here's a link to the website: www.MidnightSpecialMovie.com.