A dear friend survived a stress-filled week at work. I offered to treat him to a movie over the weekend so we could hang out.  He wanted to see a comedy.  Something silly to take his mind off work.  He picked THE BROTHERS GRIMSBY.  This is the newest rude, crude and lewd comedy from the truly talented character actor and writer Sacha Baron Cohen. 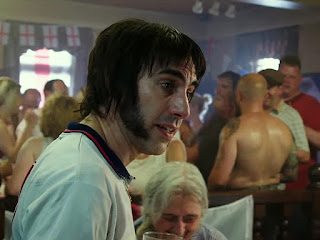 He plays the knucklehead brother who lives in a raggedy fishing village in England with his girlfriend and their nine kids.  They're all a hot mess but a happy lot. 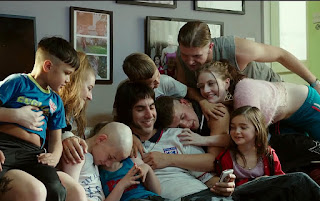 He longs to find the brother from whom he was separated in their early years.  That brother is now a secret agent on the hunt to kill a global villain.  Of course, the two brothers cross paths, reunite and the dimwit helps the spy on his secret mission that takes them to the plains of South Africa and back. 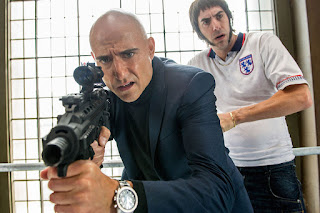 The best thing one can say about this movie is that it runs only 1 hour and 23 minutes.  A couple of those minutes are spent inside an elephant's vagina which is used as a quick hideout by the Brothers Grimsby when they flee assassins in Africa.  Trust me on this -- you will never look at the Disney's Dumbo in quite the same way after that scene.   One more thing:  A space that size would go for $3500 a month rent in New York City nowadays.  Easily.

The elephant hideout scene is one of the highlights of The Brothers Grimsby, which lets you know how low the humor is.  There was brilliance in Cohen's Borat, a socio-political mockumentary satire in which it was fascinating to watch Cohen's total commitment to character.  His Bruno was not as successful but did have its moments.  Plus there was the thrill of wondering how far he'd go in his commitment to that character.  It was like watching someone walk a tightrope.  His dramatic role in Tim Burton's 2007 film version of the dark Broadway musical, Sweeney Todd, was terrific.  It made me wish Cohen would venture more into the kind of dramatic film roles Albert Finney played early in his career -- films Saturday Night and Sunday Morning or Charlie Bubbles (which Finney also directed) and even the A Christmas Carol-based original screen musical, Scrooge.

Cohen was slated to play the late Queen singer, Freddie Mercury, in a biopic.  But he's pulled out of the project.  I would've loved to see him tackle that role.  I believe Cohen's popularity and star power would've drawn audiences to the movie about the late rock vocalist (right).

There's bathroom humor and wacky man-on-man sex-type of situations aplenty in this feature.  There's also top talent such as Penelope Cruz, Ian McShane, and Gabourey Sidibe with little to do in this juvenile film.  Note to Filmmakers:  This is the second time Best Actress Oscar nominee Gabourey Sidibe has been seen onscreen as a hotel maid since her Oscar nomination.  That's enough.  She's got fabulous comedy skills. Give Gabby some upscale comedy material to play. 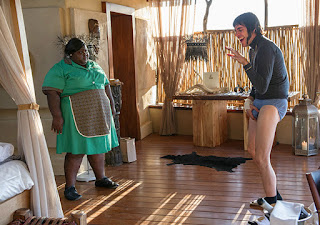 Mark Strong, who played the secret agent brother, is a very good sport and a very good actor.  He's basically the straight man to Cohen in the movie.  The handsome actor is fun to watch because he's not in the least self-conscious.  He does the actor's work and makes the most of what he was given to play.  Mark Strong is quite believable inside an elephant's vagina.  Unfortunately, The Brothers Grimsby was a major bomb at the box office last weekend when it opened. 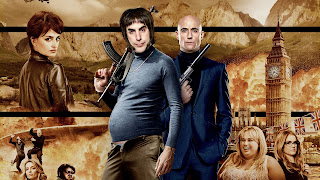 Sacha Baron Cohen will next be seen starring with Johnny Depp, Anne Hathaway and Helena Bonham Carter in the fantasy ALICE THROUGH THE LOOKING GLASS.  He plays Time.