Like many other TV viewers, I became a quick Christina Hendricks fan when I saw her as Joan as MAD MEN.  Her work on Sundance TV's HAP AND LEONARD has deepened my fan appreciation.  Wow, she is so good in this series.  She's not the Manhattan sophisticate.  She's a diner waitress in Texas.  But, like Joan, she is ambitious and she's dealing with the big boys.  I wrote a piece about this series last month before it premiered.  I've since seen all six episodes.  Man, I really hope this series gets picked up for another season. 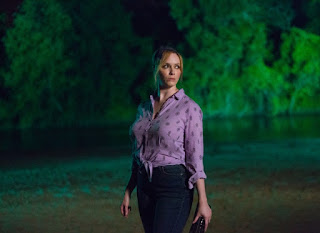 In this week's episode, which airs Wednesday night, Trudy says "I keep thinking it'll get easier but then I'll remember that's not how the world works."  When I heard that dialogue, I thought to myself "Girl, you just said exactly what I'm feeling at this point in my life."  You don't agree with everything that Trudy, the Texas femme fatale, does in the series.  But Hendricks makes you understand why she's doing it.  You come to understand why she's a complicated woman.

I read one columnist describe this as a Reagan Era-noir.  It's the 1980s in HAP AND LEONARD and the main characters survived the 60s.  Hap went to prison for being a conscientious objector who opposed the Vietnam War.  Leonard was drafted and served.  He's a veteran.  And he's gay.  He's openly gay and black and one tough customer.  His best friend is straight and white.  We don't get many working class friendships like this as the lead roles on a drama series.  It's some welcomed new turf in TV.  What I like about it most is that both men accept each other as they are and they have each other's back.  They know the emotional roads each other has traveled. 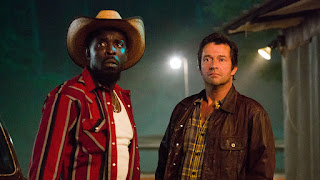 Joe Lansdale wrote the books that serve as the basis for this 6-episode series.  I have to agree with that columnist who described this as Reagan Era-noir.  It does have that feel in much the same way Robert Altman's 1973 movie, THE LONG GOODBYE, did with Elliott Gould as Raymond Chandler's famed private eye, Philip Marlowe.  Under Altman's direction, Marlowe was not the 1940s private eye as we had seen in Hollywood classics starring Humphrey Bogart and Dick Powell.  Marlowe was updated and set in L.A. during the time Ronald Reagan was Governor of California.  The political attitude in Southern California at that time permeates Altman's movie.  The President Reagan Era attitude, quite different from that of the idealistic and turbulent 1960s, filters though HAP AND LEONARD.  At one point when a lot of found money leads to crime, Trudy says "Is this who we are?"

Another characters says, "We're driving into a shit storm."  That is the definite truth as you will see.

I don't know if Christina Hendricks is getting a lot of publicity for this show, but she is fascinating to watch on it.  She spent all those years on a TV series that became part of our "must-see TV" pop culture.  This Sundance TV series highlights another side of her acting range.  Hers is not the only good performance.  The whole cast is mighty fine.  James Purefoy as Hap and Michael Kenneth Williams as Leonard are perfectly cast. 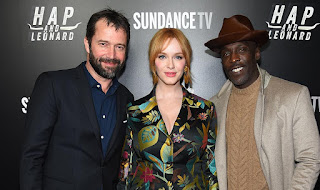 I hope that GLAAD keeps this show in mind when handing out its media awards. Novelist and series co-producer Joe Landsale has given TV a breakthrough gay character in a breakthrough male friendship.  It's a friendship I can relate to.  GLAAD should thank and award him for this show. 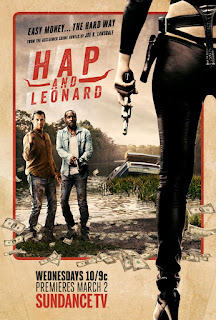 You do not want to miss these last three episodes.  How good are they?  I watched each one twice. And I want to see more.
at March 21, 2016