The singer/songwriter is an executive producer of UNDERGROUND, a powerful new cable TV series based on history relative to American's "original sin."  That sin was slavery.  This series follows a group of slaves, property on a Georgia plantation, that disrupts the ways things are and runs away.  The slaves are determined to run 600 miles to freedom.  Underground premiered Wednesday night, March 9th, on WGN America.  When I saw publicity photos a month ago for this show, I thought "They sure look contemporary for runaway slaves in the 1800s.  They look like a new band that booked a special guest music appearance on Saturday Night Live."  There's a reason for the look and it works well with the tone of this series. 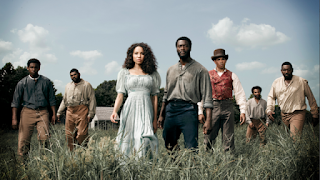 Whereas the slaves are, to their masters, in the same category as livestock, we see their talents, wit and survival skills.  Noah is the talk, dark and finely-muscled blacksmith.  Played by Aldis Hodge (an actor in the hit film, Straight Outta Compton), Noah's got a secret plan. 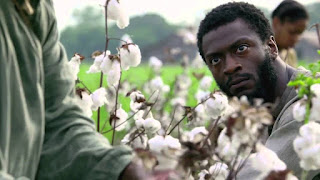 His back is like a tree marked with slim branches sprouted by evil, the evil of a slavemaster's whip.  Rosalee will tend to his wounds.  Played by Jurnee Smollett-Bell, she works in the big house.  Maybe she's not working in the fields and picking cotton under the blazing hot sun, but she is still a slave and she knows it. 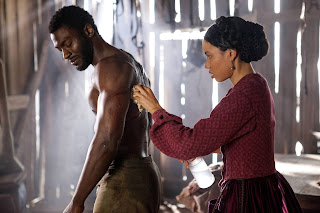 Rosalee is determined to break free.   Her mother, Ernestine, is the head slave in the big house.  Ernestine will do whatever it takes to protect her children.  Amirah Vann is so fierce in this role that you just want to fan yourself while watching her play that complicated mother.  That's how I felt watching the first four episodes.  This is Emmy or Golden Globe nomination worthy work that Amirah Vann delivers in Underground. 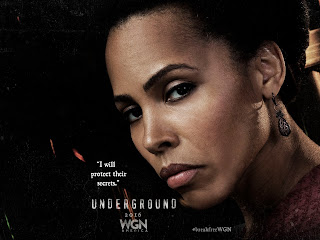 There's fine acting from the entire cast.  Some faces you will recognize from HBO shows -- like former Oz regular Chris Meloni as August Pullman, the uneducated country man who treats a runaway slave with compassion when first we meet him.  Pullman knows the way North.  North means freedom to the slaves.  Meloni is very good in this role. 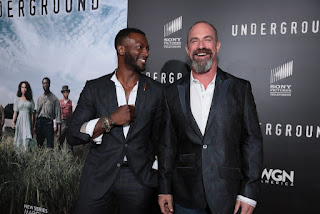 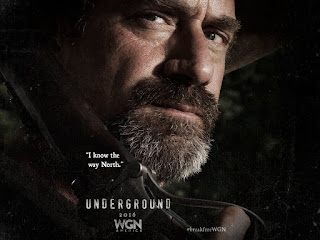 Underground doesn't present these tales of the Underground Railway to you in a scholastic PBS sort of way.  It's contemporary and relevant.  Current music is used in the soundtrack.  You may hear phrases that are more "today" than 1857.   Jessica De Gouw as the wife of an abolitionist, sounds like she could be in an episode of HBO's Girls when she plays Elizabeth Hawkes.  But, I feel, that's the point and that's what hooks you into it.  Racial exclusion, racial friction and the need for people who see the injustice still exists.  Elizabeth Hawkes may seem flighty and focused on home furnishings as first, but she becomes aware.  Watch her awakening of sorts when she sees the "air conditioning" at a high-tone plantation party in the Georgia heat.

Instead of being like slave dramas we've seen in the past, this focuses on the slave talents and a point in American history that had a direct line to the Civil Rights movement.  In seeing what each slave brings to the secret mission, Underground is like war films such as Britain's The Wooden Horse (1950) and Hollywood's The Great Escape (1963) with a touch of TV's Prison Break.  I can't think of any Hollywood classics that focused on the Underground Railway.  20th Century Fox's 1940 film, Chad Hanna, seemed like it would in the first fifteen minutes.  Chad, played by Henry Fonda, discovers a runaway slave played by Clarence Muse.  It's a very interesting scene but the slave leaves and then we concentrate on Chad's traveling circus job with Dorothy Lamour and Linda Darnell as the love interests. 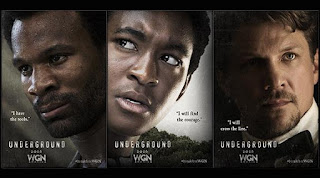 In this series, you have the slaves.  You have the cruel slave owners and their wives who all consider themselves to be genteel and Christian.  You have the liberals, those abolitionists who want to help but don't realize how evil and severe the problem really is.  You have some slaves afraid to break free.  One upcoming episode has a home invasion sequence with an ending that may call to mind the "black lives matter" protests of today.

I don't want to go into depth about elements of the stories.  I don't want to give anything away.  And there's juicy stuff to give away.  Underground is vivid, sharp, strong and surprising.  You don't have to wait until the third episode for the action to really kick in.  You know the characters and you get action in the first episode.  I watched episode #4 twice.  It knocked me out.  Jussie Smollett, known to millions of TV fans as "Jamal Lyon" on the hit Fox series, Empire, gets a meaty role in that episode and he really chews into it.

John Legend is an executive producer on this show.  Another executive producer with John is Anthony Hemingway (right).  Mr. Hemingway is also the show's director and he deserves much praise for his exceptional Underground work.  He previously episodes of HBO's The Wire. 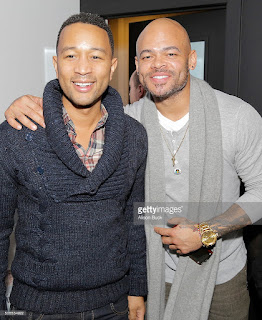 To see a trailer, the premiere episode and get more info on this new WGN America series, visit its website:
www.WGNAmerica.com/Underground.