Actor Michael Shannon has a face that gives you immediate access into a character's soul.  His face can be still but it's never blank.  There's always something in the eyes.  Working again with director Jeff Nichols, Shannon plays the troubled father of a little boy in Texas.  The boy is a gentle youngster with supernatural powers. This modestly-budgeted, touching and action-packed sci-fi thriller is called MIDNIGHT SPECIAL.  It opens March 18th.

The boy is pursued by dangerous members of a religious cult and by U.S. government agents.  Some see him as a spiritual savior.  Others see him as a secret weapon. 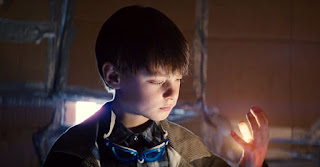 Father and son and a friend flee at night because of the boy's unique physical condition.  Roy will do whatever it takes to protect, Alton, his only child. 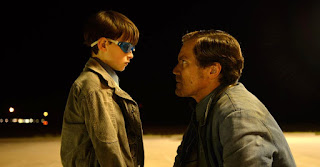 Before you get to my interview of Michael Shannon, here's a short clip from Midnight Special.

Michael Shannon had a bit part as a Marine in Oliver Stone's WORLD TRADE CENTER (2006) and he got a Best Supporting Actor Oscar nomination for REVOLUTIONARY ROAD (2008), a drama that re-teamed Leonardo DiCaprio and Kate Winslet.  He starred on the HBO series BOARDWALK EMPIRE.  Shannon and I talk about Midnight Special, his youth, his career and the rock 'n' roll superstar he plays in an upcoming film.

Midnight Special is rated PG-13.  If you have kids 12 and under, I think they'll like this movie.  Keep it in mind for family entertainment.