"Fasten your seat belts, it's going to be a bumpy night."  Screen legend Bette Davis made that movie line immortal in ALL ABOUT EVE, Oscar winner for the Best Picture of 1950.  You don't have to tell that to Oscar winner and former Oscars host, Whoopi Goldberg.  She probably has all the dialogue from that classic movie memorized.  And every bit of the staging.  She spoke to E! host Ryan Seacrest on the red carpet before last Sunday's big show.  I'm just assuming Ryan Seacrest is totally heterosexual because he's in show business, in Hollywood, and didn't recognize Whoopi's dress as being a duplicate of the "Fasten your seat belts" party dress that Bette Davis wore as Broadway diva Margo Channing in that memorable scene. 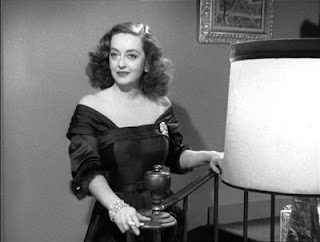 Not that there's anything wrong with Seacrest being straight, mind you.  But just about every gay man I know who loves movies and lives in the Hollywood area would've gasped immediately in recognition of Whoopi's dress.  By the time I was a high school freshman, I could've pointed to it and said "Edith Head won an Oscar for designing that dress!"  I guess Seacrest just doesn't know Head. 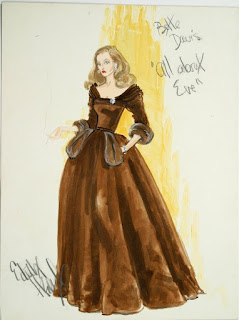 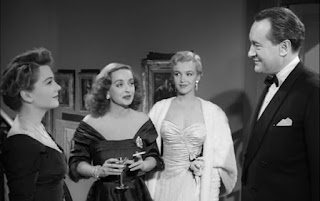 Here's his segment for E! with Whoopi Goldberg on the Oscars red carpet.

I was a Whoopi Goldberg fan before THE COLOR PURPLE, the film that brought her the first Oscar nomination of her career, even went into production.  I'd gone to my video store and rented her one-woman Broadway show, produced by the late, great Mike Nichols, several times.  Her comedic talent, her acting talent, made my jaw drop down to the floor with a clunk sound like I was a character in a 1940s Tex Avery cartoon.  She was stellar in that one-woman show.  Mike Nichols basically discovered Whoopi when she was a "downtown street artist" and became her mentor.  He put her on Broadway in 1984.  The rest is show biz history.

Whoopi was a guest on my VH1 talk show.  At the time, she was promoting her movie, CLARA'S HEART.  That 1988 movie featured a teen actor named Neil Patrick Harris.  Then Whoopi made 1990's GHOST with Patrick Swayze, the film that brought the actress her second Oscar nomination.  She won for Best Supporting Actress.  Lord knows she's got major talent and there should've been other Oscar nominations.  But her mailbox wasn't exactly stuffed with quality scripts after her Best Actress Oscar nomination for The Color Purple.  She took scripts that other actresses had rejected. In fact, she told me that had it not been for Patrick Swayze, she'd never have gotten Ghost.  The producers would not see her for a meeting or an audition.  Swayze used his star clout and took care of that.  She got seen, she got the part, the film was a big hit and she won the Oscar.

Whoopi Goldberg and Viola Davis are two extraordinary black actress who turned to TV because Hollywood did not have a lot of good script opportunities for black women.

Talented 25-year old Hollywood newcomer Jennifer Lawrence got her fourth Oscar nomination.  The movie JOY put her in the running again for Best Actress.  Joy is the true story of Joy Mangano, the woman who invented the Miracle Mop and sold it with great success on QVC.

When I saw Whoopi in this Oscar movie parody Sunday night, it broke me the heck up.  I think it's one of her funniest comedy turns since Ghost.


I worked with Whoopi for two years on a weekday national morning radio.  We occasionally talked about the Hollywood game.  I know y'all have been watching her on ABC's The View for years now, but don't forget her film versatility.  Here are my Top 5 Films with Whoopi Goldberg that show how Hollywood really dropped the ball by not coming up with more juicy scripts to highlight her talent.

1.  THE COLOR PURPLE (1985):  If you've not watched it in some time, watch it again.  Her performance truly holds up and moves you as much, if not more, today than it did then.  She's brilliant as Celie.
2.  THE LONG WALK HOME (1990):  Two Oscar winners in peak form -- Whoopi Goldberg and Sissy Spacek.  Spacek plays the well-to-do Southern wife and mother.  Whoopi plays the woman who needs to take domestic work in her home but refuses to take the bus.  And the white lady's home is not exactly nearby.  But Odessa (Whoopi) is participating in the bus boycott during the early days of the Civil Rights movement.  The two mothers will blend into each other's life.  Excellent performances.
3.  SOAPDISH  (1991):  Laughs, laughs, laughs.  Whoopi stars as the TV executive in Manhattan trying to deal with all the actor egos and lunacy behind the scenes of a popular TV soap opera.  Sally Field, Carrie Fisher and Robert Downey Jr. co-star.
4.  THE PLAYER  (1992):  I love Hollywood-on-Hollywood movies.  Robert Altman directed this satirical Hollywood murder mystery.  Tim Robbins stars as the Hollywood studio exec who's a top man on the lot.  Did he kill an aspiring screenwriter?  Det. Avery is on the case.  Whoopi stars as Det. Avery.  Cher, Julia Roberts, Bruce Willis, Jack Lemmon and Peter Falk are some of the stars who breeze in for cameo appearances.  This is a good one for classic film fans.  They'll get all the old movie references.
5.  GHOSTS OF MISSISSIPPI  (1996):  Directed by Rob Reiner, this movie based on a true story presents Whoopi Goldberg in one of her most powerful performances.  She plays the wife of slain civil rights activist, Medgar Evers.  Evers was shot in 1963.  A national figure, his murder made national headlines.  This movie focuses on the 1994 trial of the white supremacist, Byron De La Beckwith, accused of the murder.  James Woods got a Best Supporting Actor Oscar nomination for playing the racist on trial.  Alec Baldwin co-stars.

I'd love to see Whoopi get some more good roles in movies.  By the way -- for you classic film fans who dig TCM fare -- Whoopi does the best imitation of Lana Turner entering a room in a movie that I have ever, ever seen. Ever.